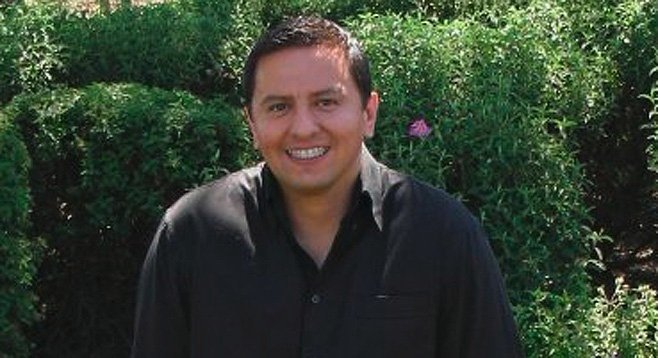 It's been more than eleven years since http://www.sandiegoreader.com/news/2002/may/02/dirty-dancing/">we first reported here about the unusual goings on at a strip club known as Cheetahs, and a decade since the FBI raided San Diego city hall, launching the infamous bribery case, known locally as Strippergate, that accused three city councilmen and cast a bright light on the city's netherworld of lobbying and inside deal making.

Among the scandal's legacies was toughening of local lobbyist disclosure laws, forcing a bevy of downtown high-dollar lawyer-lobbyists and their influence peddling brethren to reveal the big cash trade that exercises a major say in how San Diego is run.

The only defendant to do prison time in the case, Democratic ex-city councilman Ralph Inzunza, is set to be released from a halfway house in August, ending nearly two years in custody, http://www.sandiegoreader.com/weblogs/news-ticker/2012/feb/06/a-guide-to-ralph-inzunzas-life-in-prison/">most of it served in a Central Valley federal lock-up.

Meanwhile, a golfing buddy and long time friend of Inzunza and his family has recently revealed he has begun to lobby at city hall on behalf of a newly created nude entertainment advocacy group calling itself the San Diego Hospitality and Entertainment Coalition.

Cortes has been retained by the coalition to lobby the city for "fair and reasonable regulation" regarding "any matter related to the adult/nude entertainment industry," according to the filing.

The president of Cortes, the filing says, is Marco Polo Cortes, a longtime figure in South Bay politics and onetime member of the Chula Vista planning commission who previously worked for Democratic congressman Juan Vargas when he was in the legislature, as well as for http://www.sandiegoreader.com/news/2004/dec/16/media-hogs/">GOP county supervisor Greg Cox.

As http://www.sandiegoreader.com/news/2003/jul/31/fun-ralph-excerpts-busy-mans-calendar/">reported here in July 2003, mention of Cortes also showed up on Ralph Inzunza's calendar regarding a foursome at National City's golf course with Inzunza and his brother Mike in February 2002.

Inzunza made the most calls, more than 500, to family friend and political consultant Marco Polo Cortes.

In past years, Cortes has had a few scrapes with political ethics regulators. In 2000, the state's http://www.sandiegoreader.com/documents/2013/jun/28/cortes-fppc-case-document/">Fair Political Practices Commission levied a $750 fine for a late filing by Cortes's city council campaign committee; in 2009, the San Diego city ethics commission reached a stipulated agreement which required Cortes to pay $200 for http://www.sandiegoreader.com/documents/2013/jun/28/cortes-late-filing-stipulation/">failing to file his lobbying disclosure report for February 2009 on time.

Clients include Profile Research and Marketing, which is owned by Chula Vista Councilman Steve Castaneda, and Sky Vision Media Network, which Cortes once said he co-owned with his brother, Cesar Cortes.

Marco Cortes did not list how much he was paid by any client. In an interview, Cortes would not elaborate on what he does for clients.

However, some aspects of his work have become public.

Of the water district's 726 consulting contracts active during fiscal year 2002-03, 67 percent were not put out to competitive bid, according to the state audit. The district paid more than $1.5 million to five local consulting companies from April 2001 to July 2004.

In 2004, he was paid $1,100 by the Citizens for South Bay committee, which was set up to promote a public safety bond in National City.

The committee was established by National City Mayor Nick Inzunza, who spent $5,000 of committee money on behalf of George Stevens, who was campaigning for a San Diego City Council seat at the time.

When asked earlier this year what he did for the committee, Cortes said, "It was a variety of issues in the election cycle." He said he couldn't recall details.

More recently, Cortes has been a donor to San Diego city campaigns, including $750 to Bob Filner for Mayor 2012 and $500 to last year's re-election bid of city councilman Todd Gloria, according to data made available online by the city clerk's office.

Lobbying -- also called petitioning the government -- is a constitutional right and it appears that Mr. Cortes is a beneficiary of our great system. You don't say that Cortes was involved in Strippergate -- the scandal that removed three Democratic City Councilman from public office. Let's hope he doesn't repeat the past.

Councilman Charles Lewis went to an untimely early grave; Councilman Mike Zucchet resigned, fought the charges, won legal redemption and is now executive director of the Union of San Diego Municipal Employees. Only Councilman Ralph Inzunza, thought to have been the cocky Strippergate ringleader, did time after protracted legal wrangling. It will be interesting to see what Inzunza does after he gets out of jail in August.

You r obviously dishonorable and disgustingly abuser of poor women - you will not be owner of a blow job brothel - seen that - u r disgusting 2why can't u do legit business for girls and young women? Hate your mother and sisters? You need to create business that helps women, dick, not uses whoever you don't feel anything for but contempt - You have Mommy Issues , obviously you hate and use young women. If you were smart enough you could do better but u r a drug addict clearly who can't do legit business. Nobody in San Diego thinks abuse of women is ok because you can lobby for it. It was bad enough when they had the 6 foot law.