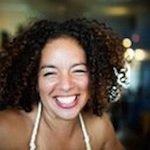 Elizabeth Salaam grew up in the suburban foothills of Boise, Idaho and subsequently followed a winding path to Olympia, Washington; Brooklyn, New York; and Gotsu (a tiny coastal town in Japan), before landing in San Diego in 2007. She published her first cover story for the Reader in January 2010. As of November 2014, she has published 45 cover stories, 17 profiles featuring random locals, and a few handfuls of City Lights stories. From 2010 to summer 2014, she also published a biweekly Q&A for Reader Jobs.