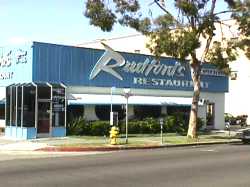 It's a little rough but a classic diner - has the best house blue cheese dressing (olive oil base)...made fresh daily.

From my ratings you can see Rudford's is not high on my list. The daily crown is mixed, but mostly the older, yet friendly group. Nice waiters and waitresses, get the $2 off coupon in the Reader before you go. Large selection of items on menu, including full breakfast menu. I have been going to Rudford's for a long time. But haven't been in about a month. It has been at the same location for ever, just one block west of 30th on El Cajon Blvd.

My main issue is the food, it just doesn't pop for me. I wouldn't say greasy spoon but rather bland in my opinion. There sandwiches are good, and should satisify. Same goes for their Entrees. They also have a Taco Salad that is more than most can eat, but again doesn't go all the way for me.

I think I would rather pay a little more at another restaurant where I really like the food than get a good deal at Rudfords. I would say worth one visit just to see if you like it. It does have an atmosphere, you never know who will pop in next.

There's a guy in the kitchen at Rudford's who makes the best table salsa in San Diego. Don't bother asking for the recipe though--they just flat don't give it out.

If your waitress doesn't automatically bring the salsa to your table, ask for it. Your food will pop, all right.