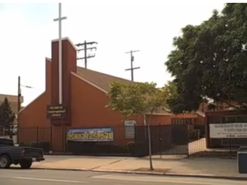 Wayne Riggs served as a Navy chaplain from 1957 to 1988. Two years later, he put his collar back on and took over at Plymouth Church. The sleek collection of buildings fronting University Avenue was run down, and he found himself painting over graffiti several times a week. There were 15 worshippers on Sunday, and there was $100,000 in debt. “We were not going to be able to rebuild an inner-city church as a family church,” he realized. “So our mission statement became, ‘To serve God by serving the people of this community.’” [+more]