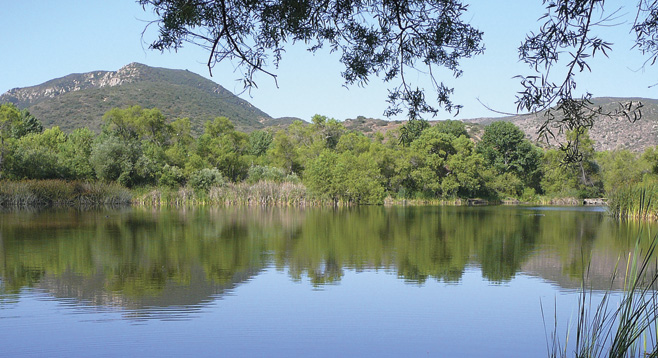 Kumeyaay Lake Campground is part of the 5,700-acre Mission Trails Regional Park (MTRP), owned and operated by the City of San Diego. Until the early 1970s, the lake was part of a sand and gravel mining operation. The H.G. Fenton Material Company’s Monarch Plant produced concrete, plaster, and gunite sand. After the lake was mined out, it was turned into a camping and fishing facility called Hollins Lake Fish Farm and Lake Recreational Facility, named for Mary Hollins, who was instrumental in creating a facility where seniors could fish. The rehabilitated-habitat area was planted with riparian vegetation, especially willow. The willows along the streams and lakeshore grew into thickets attracting the federally endangered least Bell’s vireo.

The facility was closed in 1985, and the area north of the lake became a least Bell’s vireo mitigation site for the California Department of Transportation SR-52 freeway project. Today, the lake can no longer be circumnavigated because the north side of the lake is closed off by locked gates to protect nesting areas of the federally endangered bird.