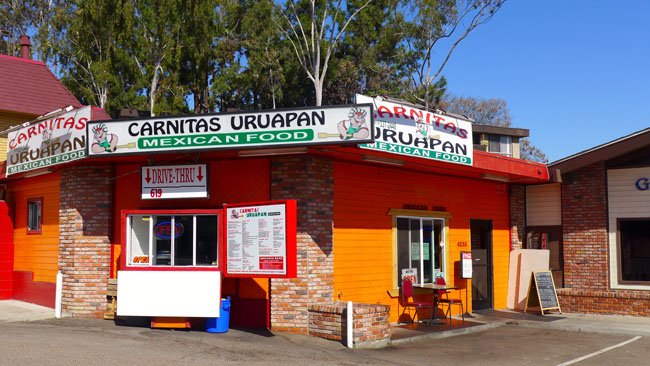 La Mesa’s family-owned Carnita Uruapan has been serving authentic Michoacán carnitas to East County since 1986. The original location opened in Tijuana, by the old El Toreo de Tijuana bullring that was torn down in 2007. Before that one closed, its owner’s cousins, Margaret and Rogelio Rodriguez, opened a location on this side of the border, in Spring Valley, around the early 90s. When Highway 125 construction hit that area, it moved to to nearby Lemon Grove. The owners passed on, and that location closed, but they left the name and concept to longtime cook, Marco Rodriguez (not related).

For decades, this Rodriguez cooked the restaurant’s carnitas the way he learned in his native Michoacán: three hours slow cooking in its own lard, with orange peels and little seasoning. Rodriguez and family have kept the tradition going (his son Marco is responsible for my new fave burrito), and that simple carnitas recipe is still what you’ll find in Uruapan’s excellent carnitas tacos.

Did a "Drive By" today to check out the location. Hadn't been in the Spring St. area in over 30 years. Didn't the current location used to be across the street many moons ago?