In love with tikka masala at Himalayan House

Lunch with the hand-wash missionary 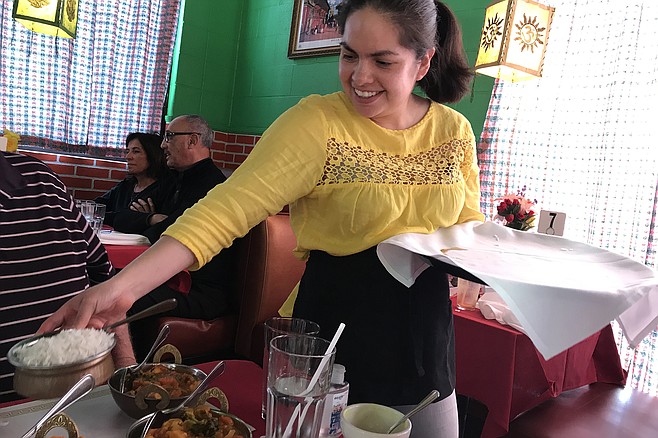 No doubt, my buddy’s become a hand-wash missionary. He disappears off into the washrooms. Jim and I head for the end of the room to get that separation from the one or two others eating here in this Himalayan Indian place. We came mainly because Hank had come here and fallen in love with the chicken tikka masala, that combo of chicken and rich mix (masala) of creamy onion and tomato sauce that has conquered the western world. This was just before the portcullis clanged down on restaurants everywhere. Didn’t realize it was gonna be the Last Meal Out for a while.

I also thought it was a good idea, because I could just see those hot spices attacking any virus that tried to ride into my gut. Zap! Pow!

Henry didn’t actually say what was Himalayan about Himalayan food, as opposed to regular Indian food. I mean, honestly, first thing that comes into your mind is yak meat and butter tea and snow leopards. But here, no sign of butter tea, yak meat, or (heaven forbid) snow leopard.

“You’re talking Nepalese, Tibetan food,” Hank says when he joins us. “Mostly Indian or Chinese food, but more basic, because less grows up there in the mountains. But they do have mountain spices like jimbu. Uh, hands?”

So righteous. Annoying part is, you know he’s right.

“Mountain spices? Jimbu?” I say when Jim and I get back from the washroom.

Fact is, I’ve been meaning to find out more about Himalayan food. I know that to survive up in the Himalayas, any plant has to be uber-tough. So mountain food stays more basic. But with its own tastes. The mountains there are covered in this herb called jimbu, and another zingy berry called timmur, also known as Szechuan pepper.

Seems jimbu adds the flavor of onion or chives, once you fry it in ghee.

“Ghee?” I say. Heard of it a million times, something to do with yak milk?

“Liquid fat from simmered butter,” says Hank, reading off his phone. And jimbu? “In the Mustang area of Nepal, they use it to flavor veggies, pickles, and meat. The rest of the country, they flavor lentils with it.”

We’re sitting at our table with its bright red tablecloth, surrounded by “brick” wainscoting and shocking green walls. Feels very Nepalese. Lanterns hover about head level, shining out the image of the elephant-headed Ganesha, the remover of obstacles, the god of new beginnings. Could do with his powers now.

Talking of beginnings, Hank says not a bad way to start is a veggie pakora, or bhaji, or fritter. It’s veggies inside a deep-fried skin of batter with unnamed “Himalayan herbs and spices,” and finished off with mint chutney.

Others are the “typical Nepalese,” like marinated sautéed lamb chholla ($10.95), with chickpeas (that’s what chholla means).

Or hey, soup, and the one everybody has heard of, mulligatawny ($4.95). The surprise is, it’s Indian. I always thought it was Irish. Just sounds it. But it’s from South India — means “peppery water” in Tamil. Here it’s a mix of lentils, chicken, and a creamy liquid base.

Hank ends up ordering that. Even though we have already gotten free bowls of lentil soup.

The mulligatawny is quite a big bowl. Meal in itself with naan bread.

Hmm. Maybe I should start with a beer. Because they stock Indian beers here. “Himalayan Snowman” goes for $8.95 for a 22oz bottle. A pretty darned good one, too, turns out. Slightly sweet, brewed in India, and with a hairy yeti striding around on the label. (Have to say, I’m just as tempted by the Nepalese chai, a lot cheaper at $2.95, a hot tea made with milk, ginger, and cardamom. Sounds delicious.)

Despite the ton of vegetarian dishes, three of the four people at a table nearby are asking for that chicken tikka masala (“boneless chicken breast cubes cooked in a cream onion and tomato sauce with Himalayan herbs and spices, $14.95), the dish that conquered the West.

Beyond that, it’s meat’n potatoes, and lots of veggie combos. And lots of curries and chutneys to flavor it up, and flatbreads to tamp it down.

Most dishes, we’re talking around $12. But one I’m looking at, lamb vindaloo, costs $16.95. The vindaloo sauce is hot stuff. They say it’s twice as hot as Madras curry. But I liked it last time I ate Indian. Vindaloo, turns out, comes from Portuguese (they had a colony in Goa). Carne da Vinha d’alhos, meaning meat (usually pork), marinated in wine and garlic. Yum.

Hank opts for a mild version of mixed veggie curry ($11.95), Jim follows him, and — herd mentality! — I kinda do too. I ask for another vegetarian curry, aloo bhanta, eggplant and potato cooked with onion and tomato sauce plus “Himalayan herbs and spices.”

But I ask for heat at least 8 out of 10, because I’m sure they softball it to gringos like us.

Hank and Jim’s veggie curries look good too, but I was right about choosing “8.” It’s hot but not smoke-out-the-ears hot. And besides, I got my Himalaya Snowman beer. Ain’t that what it’s for?

This was all just before the end of public dining as we know it. Since then, I called, and Bikson the helpful Nepalese server there says they’re hoping to stay open for take-out. But call first.

So hey! Let’s launch the take-out scene next week!