Manchester and Sudberry still kicking in donations to Faulconer cause 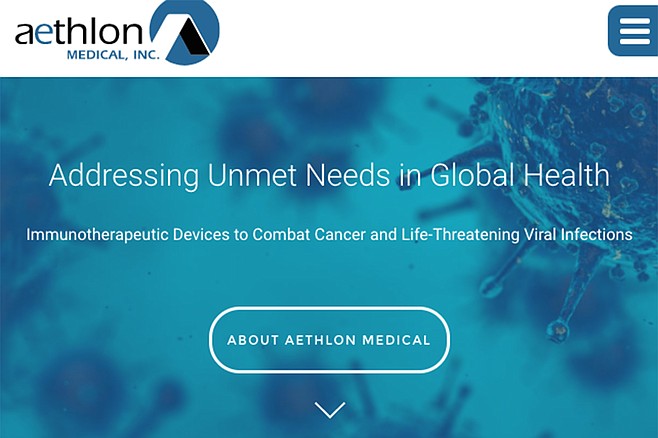 Aethlon Medical Inc., a San Diego biotech star of the 2014 Ebola virus scare, is in hot water with the federal Securities and Exchange Commission over what the firm calls the Hemopurifier. “More than half of targeted virus and protein particles are removed in a few hours,” Aethlon’s then-chief executive Jim Joyce boasted to the Union-Tribune in October 2014 about the device’s purported effect against Ebola. Six years later, the Hemopurifier, still regarded by regulators as an “experimental device,” is being touted by some for possible use against the coronavirus. That word quickly drew adverse attention from the feds. Last month the SEC ordered a ten-day suspension in the trading of Aethlon stock, alleging in the company’s words that “certain third-party promoters may have made claims about the potential efficacy of its products with respect to coronavirus.” 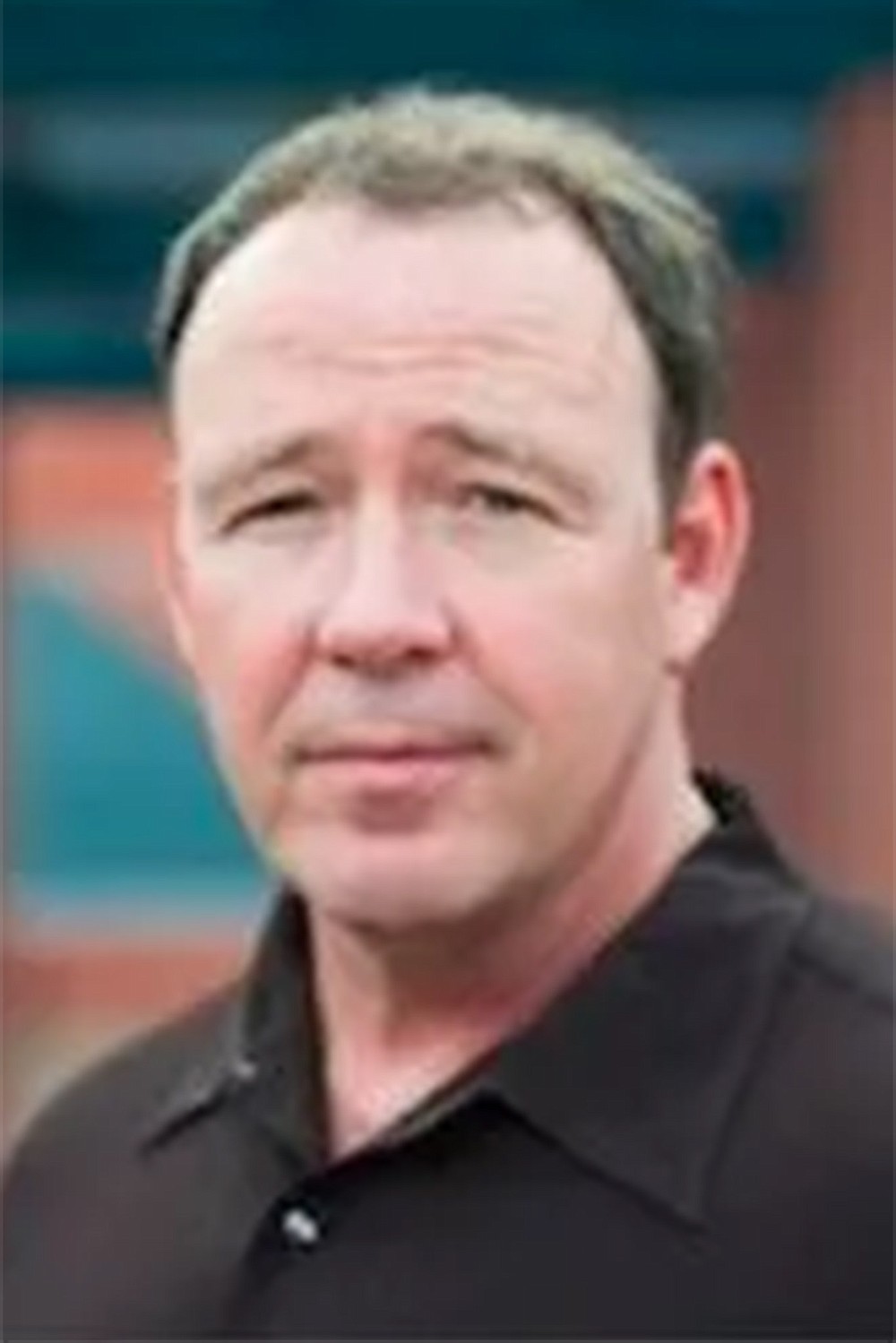 Responded Aethlon: “the company neither solicited, had advance knowledge of, nor played any role in the preparation of such reports.” Added the firm: “From the first days of the current coronavirus outbreak, Company scientists have been closely monitoring the situation, speaking with our colleagues who may be involved in the care of these patients, and evaluating whether the Hemopurifier could offer any benefit to severely affected patients. Fortunately, the majority of patients to date have not had severe disease, and those with milder disease would not be candidates for treatment with the Hemopurifier. Moreover, if it were ultimately to be used in any outbreak such as the current one, it would almost certainly not be an initial front-line treatment.”

Though controversial with some members of the city council, San Diego police are ramping up the Department’s use of so-called Conducted Energy Weapons, widely known as tasers. “Deploying a taser and aiming it at somebody and using the targeting laser on them, giving them commands that they comply — because of the presence of the taser, using that taser is essentially de-escalating from having to go to a higher level of force,” SDPD Sgt. Michael Belz told a skeptical Public Safety and Livable Neighborhoods Committee last month.

According to a February 2019 national survey by Reuters, at least 49 people died in 2018 due to tasers, but the devices have remained popular with police departments. “The City of San Diego’s Police Department uses Conducted Energy Weapons as a force option that is intended to temporarily immobilize subjects to enable officers to gain control over them,” says an invitation to bid issued by the city March 6. “When the probes make contact with the target, approximately 1200-2500 volts of electricity pass between the probes affecting the person’s sensory and motor nervous systems, capable of causing temporary immobilization.” Attached laser sights “allow for greater accuracy in both daylight and darkness.” The document adds that SDPD “currently has over 1500 CEWs produced by Taser International (Models X-26 and X-26P) in service and assigned to Department.”

The bid request calls for buying up to 1200 more similar devices over the next three years. “The purpose of this solicitation is to outfit recruits graduating the Academy (expected 200 recruits per year) in addition to replacing CEWs that have exceeded or are exceeding their useful life.” The new weapons must “have an effective range from point-blank to at least 21 feet.”

Time is running out for termed-out San Diego mayor Kevin Faulconer, set to depart office at the end of the year, leaving the future of the Faulconer-founded One San Diego charity in limbo. During a March 5 appearance on KUSI TV to promote One San Diego’s annual fundraiser called Neighborhood Experience, the mayor’s wife Katherine Faulconer, the titular head of the group, told a questioner to stay tuned for future announcements regarding the non-profit’s future. She furnished no further details. The group, widely known for sponsoring Faulconer’s televised Thanksgiving turkey giveaways in poorer parts of town, relies heavily on mayoral behests of funding from a bevy of city hall favor seekers eager for the mayor’s ear. 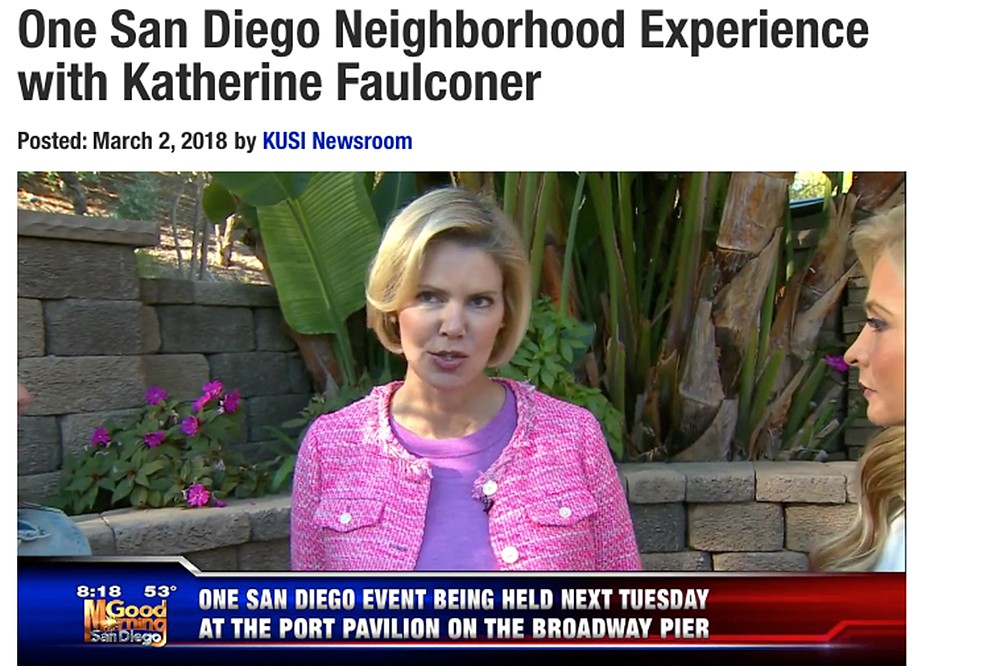 Katherine Faulconer, the mayor's wife, advocates for One San Diego on KUSI.

Latest to kick in, per disclosure reports filed by Faulconer with the city on March 12, are the Sudberry Family Trust and downtown’s Manchester Grand Hyatt, each with $5000 on February 8. Sudberry Properties, run by family patriarch Tom Sudberry, is a significant housing and commercial developer in Mission Valley and beyond. A January 15 disclosure report says the company is registered with the city to lobby for projects including a Scripps Highland community plan amendment, Serra Mesa community plan changes, and an “Affordable Housing Agreement regarding the Quarry Falls Community in Mission Valley.”

The Manchester Grand Hyatt hotel, located almost adjacent to the downtown convention center, was the biggest donor to the mayor’s ill-fated initiative bid to expand the facility, putting up $300,000. Another $5000 for One San Diego arrived February 25 from Vulcan Materials Company of Birmingham, Alabama. The company employs three lobbyists: Khoa Nguyen, PPR Solutions, and Hecht Solberg Robinson Goldberg & Bagley LLP, city records show, regarding approval of the Stone Creek Master Plan on the site of a legacy mining operation in Carroll Canyon.

I have no idea to what story this comment is being attached, but I'm sorry to say the new web format/layout is confusing and hard to read and feels, well, very temporary. I hope at least it was on sale. And what's with those annoying presumptuous labels denoting how much time it takes to read a particular story? You have no idea how long it takes a reader to read the Reader, so don't tell us. It feels almost tronc-like. Maybe it's so hip we don't even know how we're supposed to feel about what seems an intrusion on our private reading experience. If there were rating-thumbs, mine would be trending downward.

The new format SUCKS! Fire whoever thought this was an improvement. It is hard to follow and the "reply" button does not work.