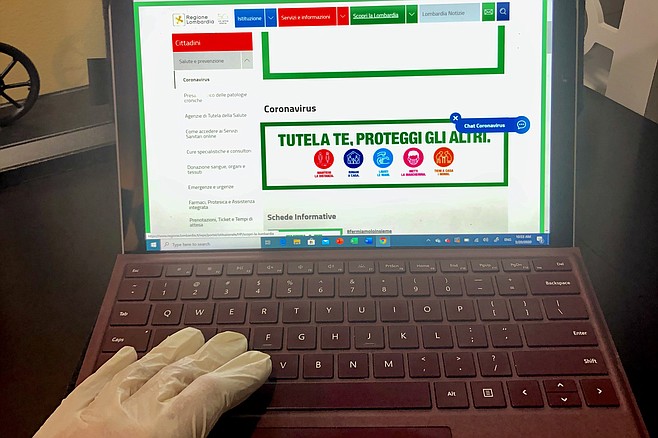 Anna got out of Lombardy in the north of Italy just in time. She has business here as well as there. She doesn’t want to use her last name because she sees that some people are now wary of Italians in these coronavirus times.

“The other day I was in a gelato shop, and this lady was speaking loudly to the server: ‘These Italians! They’re so over the top hugging and kissing. No wonder we’ve got the virus over here now.’”

“Actually,” says Anna, “Lombardy, where I am from, is in the north. It’s the economic engine of Italy. People there are serious and conservative.”

Lombardy is also where the virus has struck hardest. “The government’s biggest mistake there: they instituted laws little by little. Like they closed stores, but not stores that sold tobacco! Because in Italy, tobacco is a national monopoly. Why would they give that up? In my opinion, they should have adopted extreme measures immediately, and strongly enforced those measures, but for a limited period of time, so it wouldn’t feel like a life sentence.”

Lombardy’s problem, Anna says, is that enforcement of the law is “non-existent.” They did a cellphone survey to check on what people were actually doing in the middle of their “total lockdown” period. “They found 42 percent were out and about! During the week! On Sunday, 20 percent were out. On Saturday, 34 percent were out. So the lockdown has to be as short as possible. Two weeks, even if the virus will still be here.”

Anna believes the two best things that both Lombardy and California did were to give the order for self-isolation to set up dedicated hotlines.

Why was Lombardy hit so hard? Anna believes it was because of one “idiot.”

“He had just come back from China. Started getting sick. Never reported his sickness. Kept socializing. It was not until he became really ill that one of his friends reported him, but by that time the cat was out of the bag.”

Beyond that one idiot, many are pointing out that the region hosts hundreds of thousands of Chinese factory workers, many of whom visited their home country for the Lunar New Year in January.

Mistakes were made in Lombardy that Anna thinks we can learn from. “For instance, they had the idea to reduce public transportation in Milan. So they cut services by 40 percent. And guess what happened? It resulted in total disaster.”

She says the remaining morning trains were packed with people who could not keep anything like the safe distance from each other.

And for all their reputation as party people, Anna says, Italians are very hard-working, disciplined, and generous. “Italy sent 250,000 masks to China in February, 500,000 test kits to the US. But others were generous to us. Cuba has sent 75 doctors expert in dealing with Ebola. And Samaritan’s Purse [of Billy Graham’s son Franklin’s evangelical church] has sent a complete field hospital to Cremona province.

“This crisis has allowed generosity to spread everywhere. I like how California stores are opening early just for the elderly and sick. We should do that in Lombardy.”

Meanwhile, she’s trying to get back to Lombardy. It’s not so easy. “My British Airways flight to London has been canceled. I might have to get an earlier flight.”