Hunger made me imitate Michael Jackson

“The dancer gets to pick the lady that he wants.” 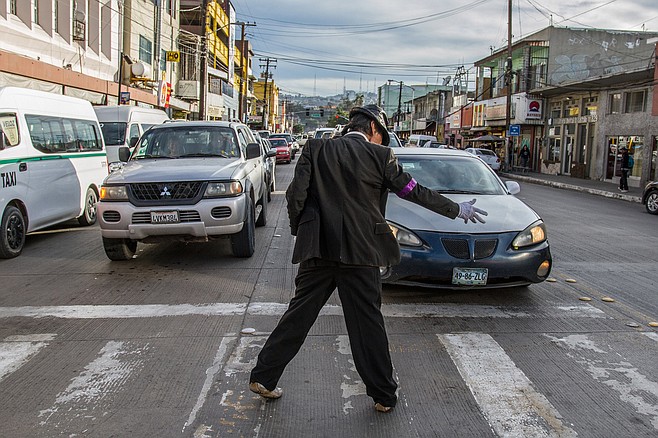 A Michael Jackson impersonator dances on the streets of Tijuana to the rhythm of idling motors and honking cars in heavy traffic areas around the city. People crossing the street shuffle around his act and pay no mind. After a minute of dancing a capella, he throws his hat towards the motorists and bows. He quickly picks up his hat and goes in between cars asking for money.

Like many Tijuana street characters, “El Michael Jackson de Tijuana,” goes to popular places where tips are expected. He dances at the San Ysidro border wait line, by the Cuauhtemoc statue in Zona Rio, outside La Lazaro (Tijuana’s biggest public high school), and anywhere a crowd might be. I frequently spot him at the intersection of Calle Segunda and Avenida Niños Heroes in downtown Tijuana.

“What did you expect, Ricky Martin?” he jokes in Spanish when people do not react to him. 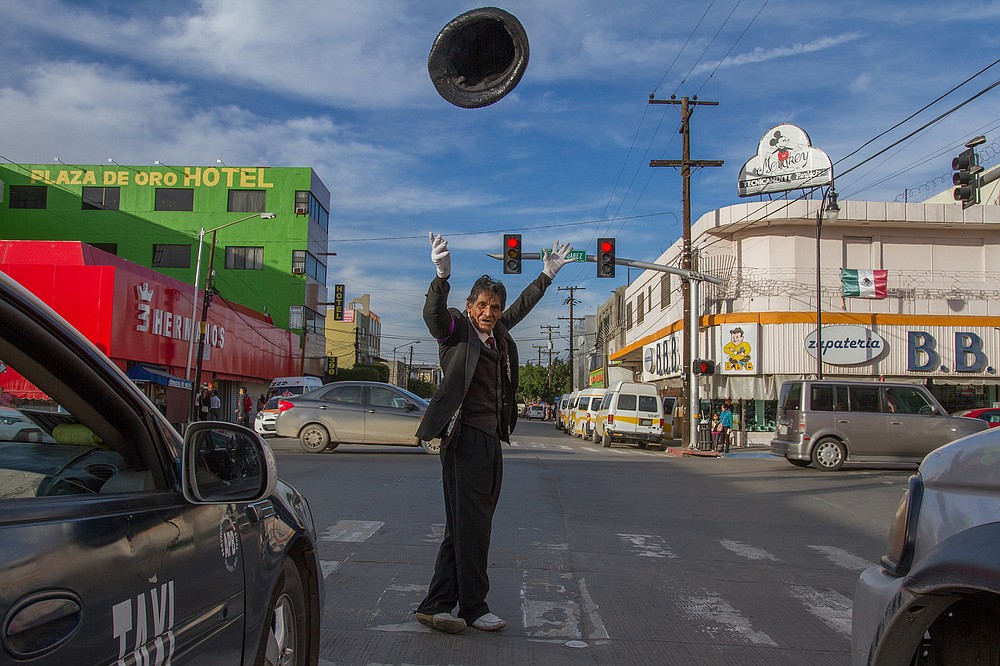 “Dancing, without question, is the most beautiful thing for me.”

“Iralo, these guys are fans of El Michael,” he says excitedly when he gets pesos or dollars.

“Grab your camera and ask me better questions than Univision,” he tells me when I approach him one afternoon.

I returned 30 minutes later to find El Michael Jackson de Tijuana dancing on the same spot on Calle Segunda. He motioned me to take pictures of him. I snapped pictures while he danced in front of cars waiting for the red light to change.

“Mira, after just one minute I made 70 pesos!” — about $2.75 — “And they also gave me a rana verde. I love las ranas verdes,” said the impersonator excitedly holding a dollar bill in his dusty white gloves. (Rana verde translates to green frog). I asked him if he wanted coffee, lunch, or a beer to sit down while we talked, he refused and started giving me his life story as soon as I started recording.

“Hunger made me imitate Michael Jackson,” says José Andrés Hernández Zepeda, the impersonator’s real name. “Honestly, I like dancing mambo, chachacha, danzón. I used to dance like James Brown. Andy Ruth, that’s the name I danced with my whole life. I came to Tijuana around 11 years ago. I’m” — he holds up seven fingers then four instead of saying the number 74 — “years old now. I was a professional dancer by the age of 16 in Guadalajara. I was born in the poorest of hoods in a place they called La Rata Muerta (Dead Rat) in the barrio of Analco. My father, my four siblings, my mother... I washed rich people’s cars with my mother. I grew up very poor. I am proud of that poverty, because it taught me how to earn my money with my being and my own hands. My mother had a philosophy, she didn’t want robbers or…”

Andy hesitates before saying what he was about to say. “Well, my mother was very homophobic. She said she didn’t want robbers or maricones” (a derogatory slang for gays). And I asked ‘Ma, what about women?” She said, ‘Mujeres, las que quieras.’ (Women, as many women as you want). It was at that moment that I started creating my masterplan, to enamor as many women as I could. But I was very ugly, so I had to resort to making money, and I got plastic surgery done. I got diamonds in my teeth. I transformed myself. I became an athlete. Women always love good looks.”

At 74, Andy’s purported good looks are deteriorating, not only due to Father Time but drug consumption. Many of his teeth are missing, and none of the survivors have diamonds. He sports his hair in a raggedy ponytail and hides the rest under his hat. 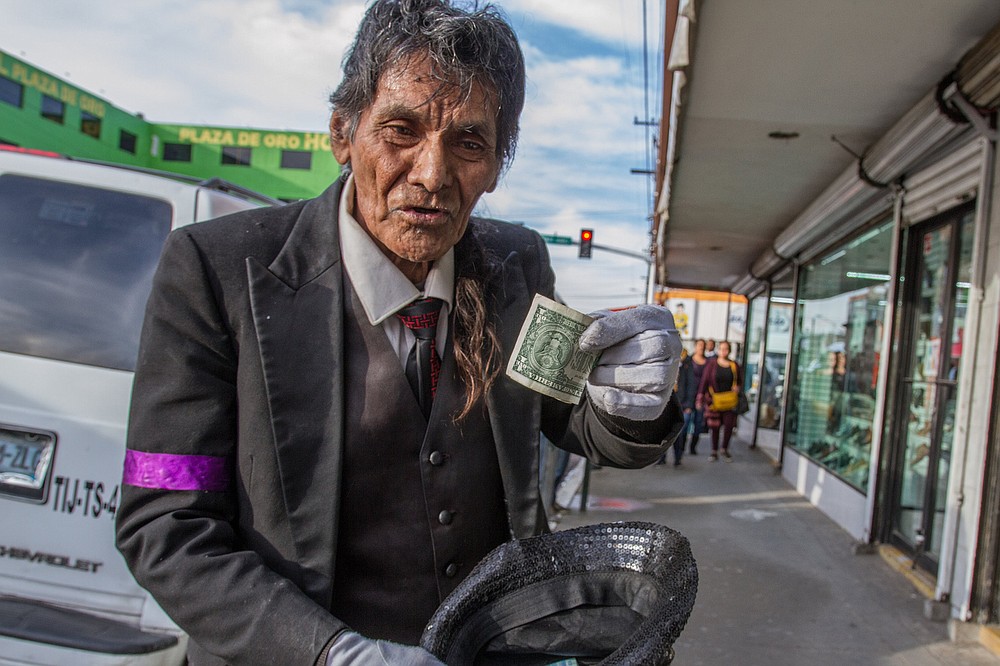 “I love the green frogs.”

“I started to dance mambo in the hood. There was a little sound system and they hung underwear and skirts around,” Andy pointed at invisible balconies where the skirts would hang. “I noticed that the dancer gets to pick the lady that he wants, I had no other choice but to dance. I was ugly, but I danced well. I was successful. I had the luxury to pick the women I wanted to dance with, and I slept with over a thousand women in those times. Let me tell you, really, over a thousand women.”

Andy went off in a tangent telling me about all the women he has been with and how to conquer them by dance, doing a little shuffle now and then showing me how it is done. I tried to reel him back in to talk about how he started as a Michael Jackson impersonator.

“After mambo, the Beatles came. That wasn’t very danceable. And boom! All the hippies came out. This was too much of a boom for humanity. Too many drugs. I was born in ’46 the beatles, were just a year older than me. Elvis Presley, then the, Beatles! Then, James Brown, they changed not only dance, but culture and all knowledge changed.”

“First it was mambo, then it was chachacha, I danced those professionally... but I stopped dancing and started working on the railways. That was from Guadalajara to Nogales in the Railway of the Pacific, and I lived on rails and trains, left dance behind. It was after that, when I returned to Guadalajara, that I fell into a dark hole of drugs, piedra (crack.) Look, I started smoking cigarettes when I was eight years old, marijuana when I was 19 or 20, and I balanced it all with dancing. It was when I started using crack when me desmadre. My advice is to never do those chingaderas, no crico, no piedra, or any of those synthetic substances like fentanyl. Back then, I led the life of a padrote (pimp) and my life was la padroteada (pimping). But it is not a life to live. My mother always told me I should lock myself up, because I had issues. I promised her I would leave that life behind.... Look, I am 74. I should have been dead when I was 30 or 40, because I hit life very hard. I never slept, because I was a pimp. Dancing balanced me out.”

Andy rambled advice for a better life through exercise and dance and staying off drugs or alcohol, often repeating himself and peppering stories about the women he has been with and other nonsensical stories about his neighborhood in Guadalajara.

“Look, my friends, my compadres, a dancer chooses the woman he wants. They don’t choose you. To anyone out there listening to me, people are fat now. They have diabetes and other diseases. Stop using your tablet. Stop doing drugs and just dance. Or do exercise. But dancing is better.”

“Speaking of dancing, how did you end up as Michael Jackson?” I asked him again.

“I couldn’t see him, because I was very poor and I didn’t have a TV. It was here (Tijuana) that I started impersonating him. I started dancing like Michael Jackson 20 days before he died.”

Michael Jackson died on June 25, 2009. “When I saw him, I knew it was very difficult. It’s all technique, enthusiasm, and the joy of dancing. If you see Michael Jackson, don’t try to imitate him, none of us can. But he is the only character people want to see. People don’t want to see a dancer like Resortes or Tin Tan or Fred Astaire or James Brown. They recognize Michael Jackson, so when I dance I have to project the undeniable figure of Michael Jackson so people can understand it’s Michael Jackson.”

Resortes (Adalberto Martínez) and Tin Tan (Germán Valdés) are comedians/dancers from the 40s and 50s in Mexico.

“It was very difficult to picar piedra” — literally, chop stone; colloquially; to make a go of it ) — here in Tijuana. They used to pick me up and throw me in jail for begging in the streets. I was told I couldn’t beg, and la policía would ask for money to leave me alone. I couldn’t give a dollar or two for every cabrón that stopped me. Nowadays, the cops give me money. You see, you have to use psychology with people. You have to be optimistic and have a sense of humor. You have to make them like you.”

Regarding his choreography, Andy says, “Billie Jean is the mother routine of them all, but I don’t have a sound system, I dance a capella.”

I asked if he had a favorite song that played in his mind when he danced. “At home, I have salsa videos. I really like Cuban and AfroMexican dancing. But I also like Anglo-Saxon music. I like to mix it all, but you have to have a symmetric figure, you have to look clean, you have to project sexy effort.”

Though his Michael Jackson outfit is dusty and has seen better times, Andy does his best to make it look dapper. “I have different suits for different routines. The routine of ‘Dangerous’ is the black suit with white shirt, black tie, and two white gloves. That’s what I have on right now. The scarlet suit means it’s ‘Billie Jean’, scarlet shirt, silver glove on the left hand. I have the glove that belonged to Michael Jackson, one of my fans gave me the original one. ‘Smooth Criminal’ is characterized by a white suit. He dances tango in that one. The entrance is in the style of Resortes. He does a tango step, and then breaks with his hands inside the suit. His breaks are of rock boogie, he danced a lot of boogie. He danced the pendulum, that’s when you dance on your own axis like a clock. That’s the pendulum dance. He debuted that in China... no, in Japan. And it was a great success.”

Before recording a video of him dancing, I asked Andy if he had anything to add. “I invite everyone to dance! What’s your name? Mateo? Mateo Suárez? Mateo is interviewing me and through him and in this interview, I want to tell people to dance. Dance whatever you want. Polka. I don’t care. Or do exercise. But dancing, without question, is the most beautiful thing for me.”

After I recorded a video of him dancing, Andy told me he would like to invite everyone to search for him on YouTube “El Michael Jackson de Tijuana.”