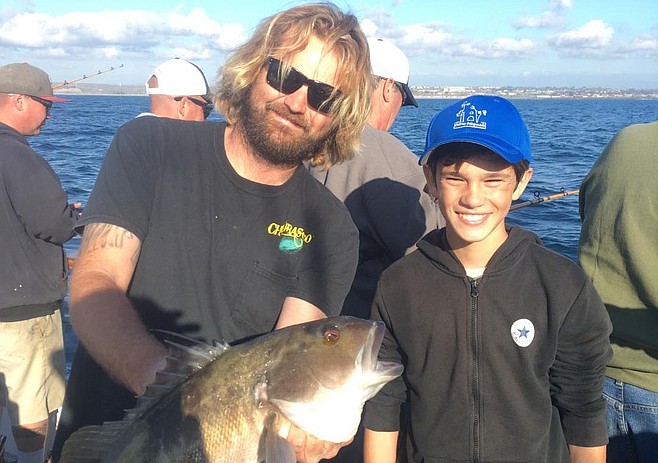 Because he fixes their equipment, Ken Corwin knows how good it’s been for fishermen based in the Oceanside harbor. “Blue fin started really showing up five years ago,” says Corwin from behind his work bench at his 25-year-old dockside business called Ken’s Custom Reel. “The last five years in sports fishing has been outstanding. It used to be you might get a 70-pound yellow or blue fin tuna. Just recently they caught a 300-pound bluefin. A 265 pound yellowfin caught 17-miles in front of the harbor was a record.”

Until Coronavirus, sportsfishing had been humming along for the 80 boats based in San Diego and the eight based in Oceanside who take out families and tourists on full- or half-day excursions. But for the seven or so local commercial fishermen based in Oceanside, things started tanking last summer. That's when when the China trade war eliminated the once lucrative Asian import trade. Local commercial fishermen were selling lobster for up to $40 a pound. 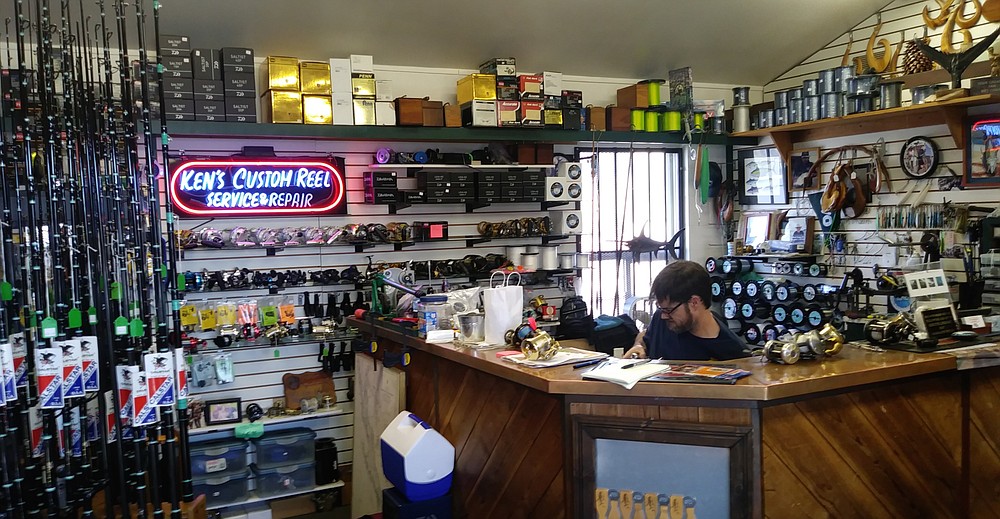 But then on March 18 all the local sportsfishing boats moored at the Oceanside harbor stopped going out. And that was bad for Ken's Custom Reel. “Now it’s 100 percent shut,” says Corwin. “Nothing is good about this. There is no smiley face telling us everything will be okay…It’s a Saturday afternoon and there’s plenty of parking,” he said pointing to Harbor Drive North. “It used to be that between 1 and 4 pm on a Saturday you couldn’t park anywhere around here.”

Corwin says said he spent a lot of capital to boost his supply of rods and reels. “I just bought new inventory for the Fred Hall Show,” he says of the annual tackle and boat expo at the Del Mar Fairgrounds which was supposed to open March 26. “They moved it to May 21 but now I don’t know if that one will happen either. I don’t even see the Fair happening.”

Corwin says his 800-square-foot shop has reel repair work backed up for two months. After that, he is not sure what will become of his or any of the 25 other businesses who rent harbor space from the city of Oceanside. Nine of those businesses are fish- or boating-related. 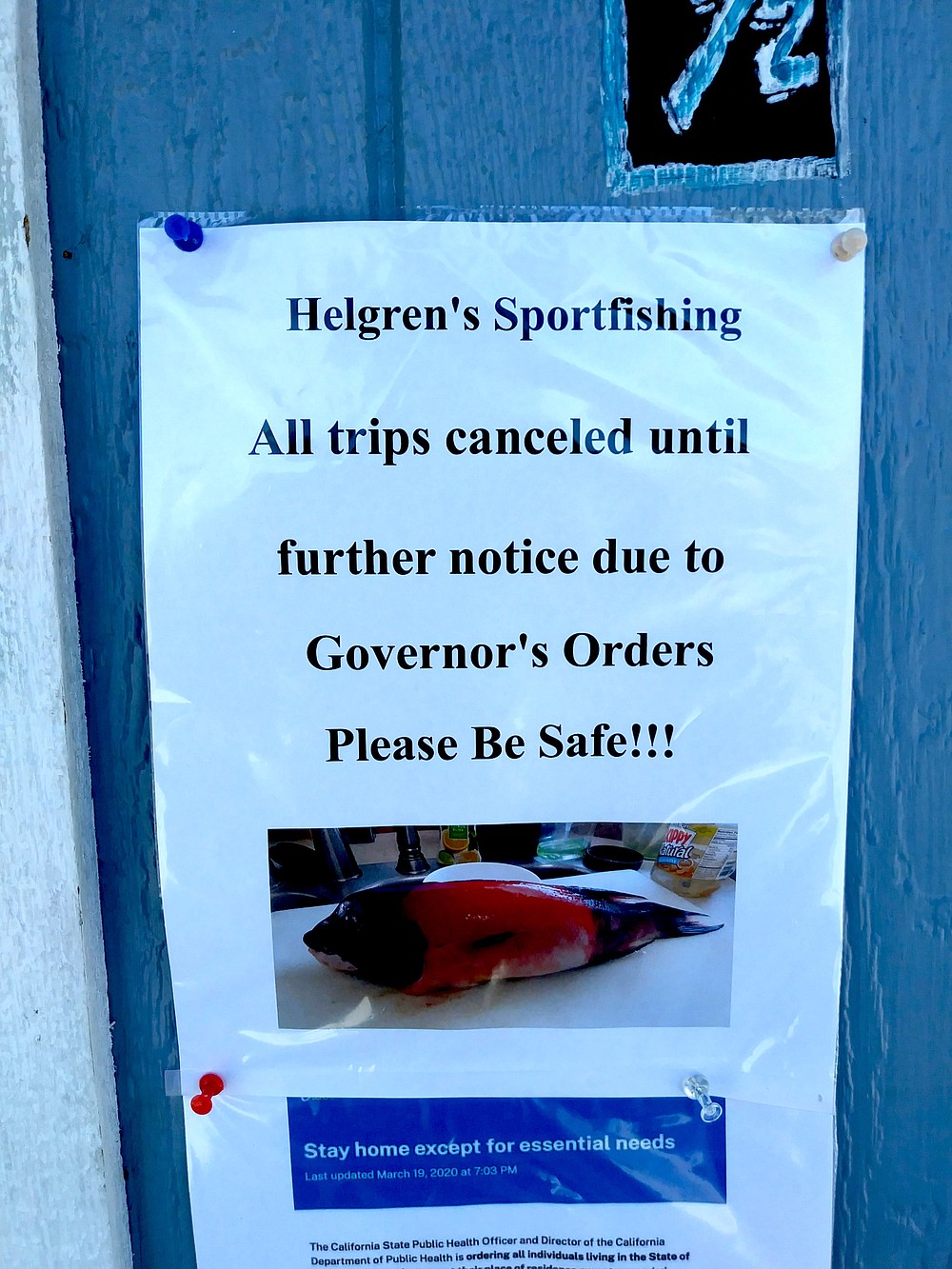 “This [Coronavirus] could be a devastating thing if it goes on without help,” says Ernie Prieto, managing partner of the Oceanside Sea Center which overseas five sportsfishing boats that take out up to 50 out at a time.

“We rely on travel and tourism,” says Prieto. “That’s a big portion of our business. I put us in the same market as hotels.”

He says most of his staff of 14 who were just laid off are, “…retired guys or they have spouses who work at necessary businesses. I’m most worried about my crew and captains. Fishing is all they do.” Prieto said he just invested over six figures over the slower winter months in upkeep in anticipation of the Spring Break week which he says serves as the launch of his busy summer season.

“Now this Covid thing has taken away our cash flow.” Prieto says he has approached Oceanside about his situation. “As a leaseholder I hope they are going to make some consideration for us.”

Fisherman Joe who just wants to use his first name is one of the seven commercial fishermen based in Oceanside. Joe says his specialty is the eel-like hagfish which has limited stateside appeal but has traditionally been in huge demand in Korea. He says his Long Beach based importer stopped buying from him months ago.

“We took an ass-whuppin’,” says Joe. “I pulled all my traps out of the water.” He says he is considering taking his boat out of the Oceanside harbor and putting it in dry-dock. But Joe says it was the local lobstermen whose season lasted from October to March 15 who got hit especially bad.

Joe points out that local restaurants and fish markets only want Maine lobsters with claws and that locally caught California spiny tail lobsters just don’t matter to locals. When Asian demand cratered, things got ugly. “Towards the end of the season, the lobster guys couldn’t sell what they caught. They started selling them on the sidewalk. They had already invested money in fuel and labor and they couldn’t get anything for their catch.”

Yohan Choi of Neptune Foods of Long Beach was a major buyer of Joe’s hagfish. “I sell mainly to Korea. They stopped buying anything from us when the Coronavirus hit them. It’s the same there as here. Everyone started self-quarantining and they gave up buying delicacies like hagfish. Just like us, when they go to the store, they now just get the basics like eggs and milk.”

“All sports fishing is shut, up and down the coast,” says Peter Gray co-host of the “Let’s Talk Hookup” live radio show heard weekend mornings on The Fan 97.3. While the sportsfishing boats remain moored, he says his show will still serve the fishermen who go out on private boats.

“We now broadcast out of my office since we’re not allowed in the station,” says Gray. He says people still want to hear local fish reports. Oh and by the way, the last few years have been pretty good. “It’s definitely been a banner year for sportsfishing.”

But Gray is ready for this Covid thing to be over. “Everybody is hoping that by May 15 everything will be back up and operating. We certainly hope so. But one no one knows for sure.”

But Trump’s tariffs may still torment the commercial fishermen who relied on Asian imports. “Commercial fishing boats are loaded for fish they can’t sell,” says Davin Waite co-founder of Oceanside’s Wrench & Rodent sushi restaurant. “But they started eating it long before Covid. It all started with the tariffs.” He says it is simple economics. “Chinese pay more money to take our local catch than we’re willing to pay. In return they are sending back farm-raised Tilapia. Go figure.”

Waite says his sushi restaurant on Coast Highway will re-open for to go orders this weekend after two weeks of closure.

Going forward, Waite says he hopes that locals would start considering locally caught spiny lobster and some of the smaller local crab species besides giant crab. “Americans want big in everything. They want the big steak, the big lobster, the big crab.”

Waite points out the bright side of fewer fishing hauls: “One can only hope that by leaving Mother Earth alone for a little while it might give the entire planet some breathing room. Maybe the silver lining to all this is that mankind will slow down a little and start appreciating the world we live in.”

Ken Corwin of Ken's Custom Reel wants it to be known that the tariff's absolutely had no bad effects on his business and in fact he says that his business during the Trump era has thrived.