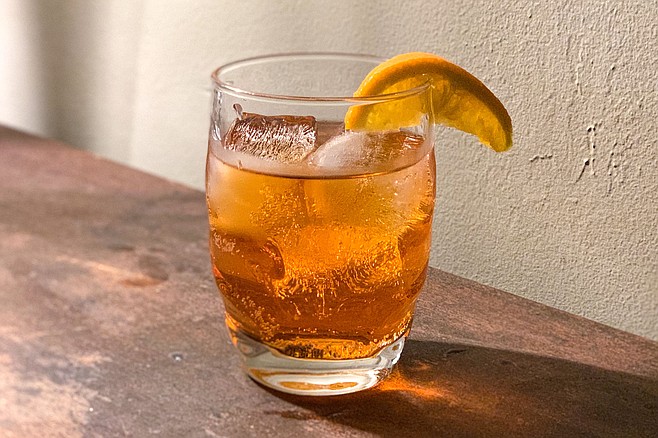 Bars closed last week by government order, but there’s a catch: bars that serve food can stay open, and serve food to go. More than that, in a notice of regulatory relief aimed at the alcohol industry, the state has eased regulations to allow these restaurants to sell alcohol to go.

There are a couple of key stipulations here. First, a restaurant can only sell you booze if it’s also selling you food. Second: don’t expect to drive away with a plastic cup of beer: the prevailing rule is that any retail alcoholic beverage must be securely capped. So, at first glance you’re looking at cans and bottles of beer, wine, cider, hard kombucha, etc., which you may as easily get at a grocery store. 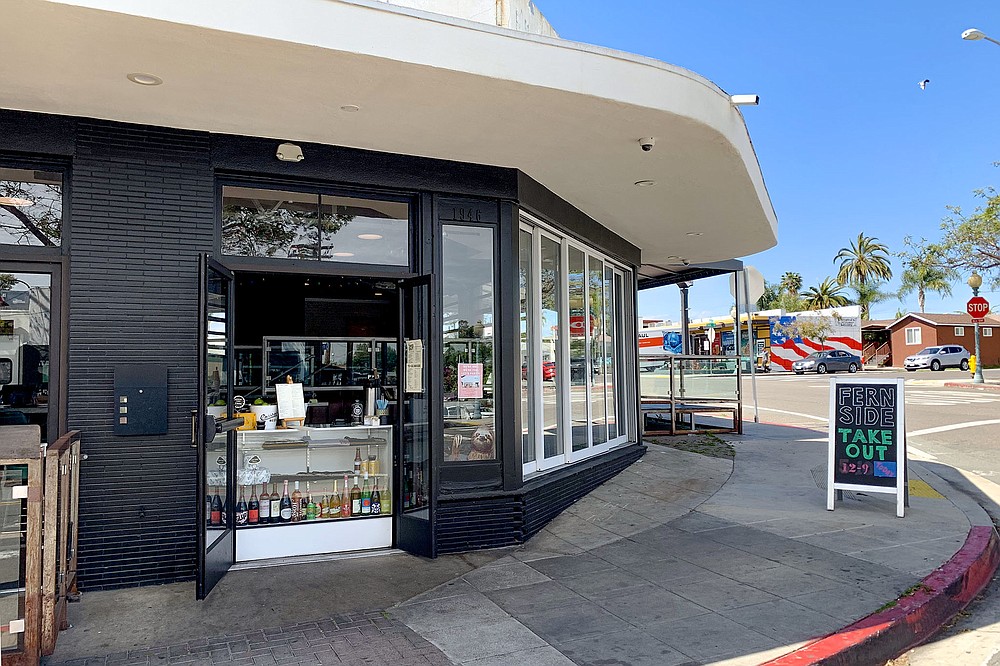 Fernside converted its entrance to a take-out counter.

However, the new rules don’t only apply to fermented drinks. You may also buy bottles of liquor. A fine example is North Park urban distillery 619 Spirits, which stocks its own selection of vodkas, plus spirits from other local craft distilleries. It has set up an ad hoc drive-thru where you can pick up food, or bottles of vodka along with mocktails to mix them with. It's one of several restaurants that has started serving pre-packaged cocktails to go. 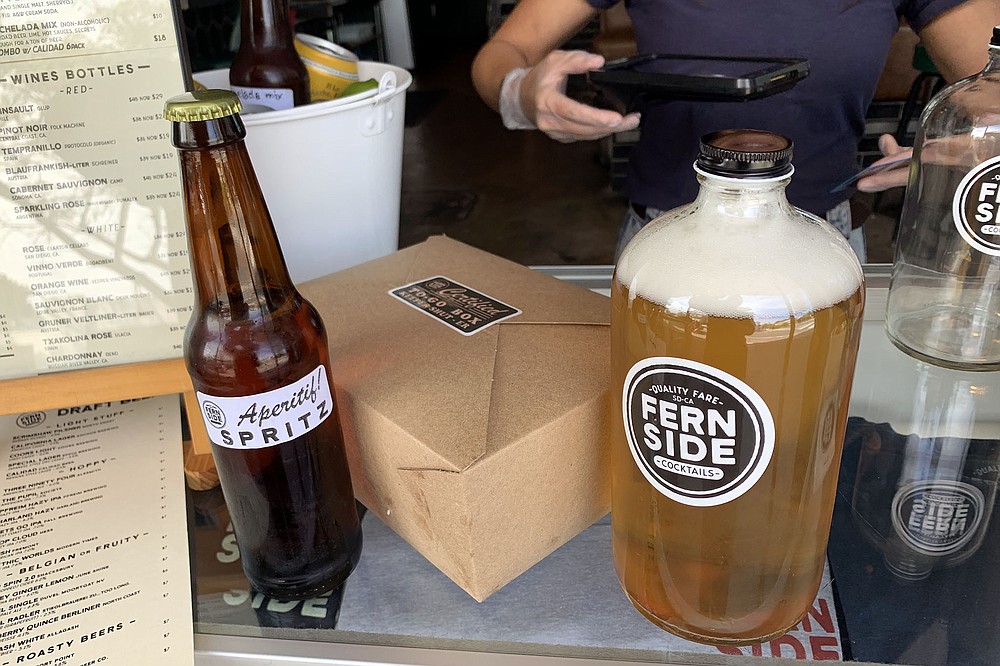 The first spot I’d heard about doing this was the South Park neighborhood bar and grill Fernside, which started bottled draft cocktails conceived by one of its operating partners, Christian Siglin, who happens to be one of the city’s best known mixologists.

Unlike most San Diego bars, Fernside’s liquor license lacks a provision prohibiting off-premise sales, so it jumped the gun little bit, and started selling booze to go before the notice of relief. At the ABC’s request it paused briefly, but once the new rules went into effect, Fernside was ready to go. It set up online ordering (look for “To-Go Booze” on the ordering menu), and converted its front door into a take-out counter. 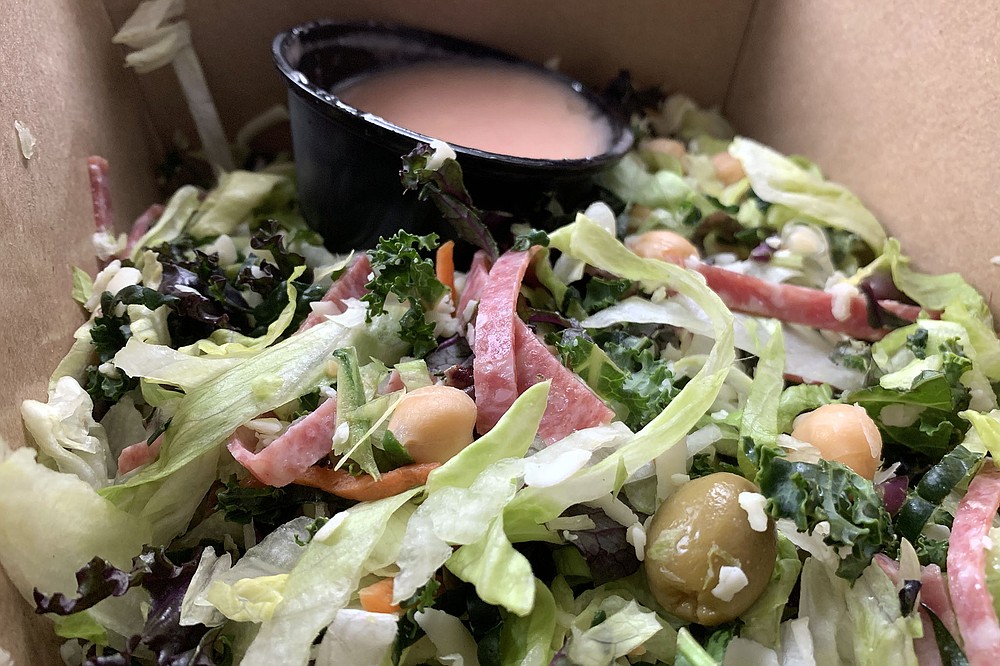 It stocked up on bottles to serve as growlers for draft beer to-go. This includes a notable taplist of locally brewed craft beers for a flat rate of $13, including the growler (disregard early website instructions to bring your own growler, they can only fill their own). Normally, I’d order a local brew, but I couldn’t resist the chance to nab 32 ounces (better known as two pints) of one of the world’s great Belgian ales, Duvel Single, straight from the tap at that price. 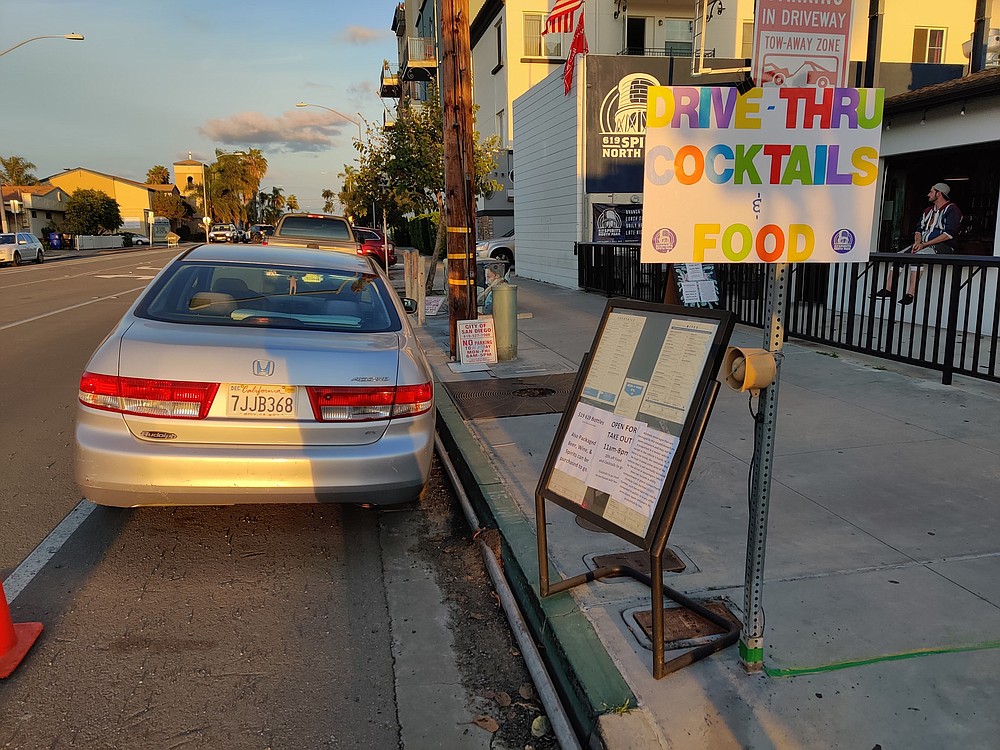 619 Spirits turned its sidewalk into a drive-thru for take-out bottles, cocktails, and food.

I picked up a $14 chopped salad of salami, white cheddar, olives, chickpeas, carrots, kale, lettuce, and red wine vinaigrette. Because, remember, food has to be a part of this order. I could really use the fresh greens following a couple days isolation eating noodles and homemade bean burritos. The entree-sized salad did not disappoint.

But, it’s the bottled cocktail I picked up that made my day. Fernside had temporarily sold out of my first choice, the Happy Lil Highball, a mix of single malt whiskey, sherry, douglas fir liqueur, and cream soda that, honestly, sounds so good I’ll try to go back.

Instead I “settled” for an aperol spritz: Luxardo apertivo with sparkling wine and coconut soda. What an unexpected pleasure it was at the end of the day to pour myself a couple of glasses over ice (all Fernside’s 12-ounce bottles serve doubles). On one hand the sparkling citric and herbal concoction tastes refreshing, on the other, it has a pleasant, somewhat tonic bitterness that proves especially satisfying in the midst of a health scare.

Beside 619 Spirits and Fernside, other cocktails to-go programs include Pacific Coast Spirits in Oceanside, Madison on Park in University Heights, and Mustangs & Burros in La Jolla, with more adopting the practice daily. Check with your favorite local cocktail purveyor.