Whether it's outer space or a dark alley, these heroes dress funny 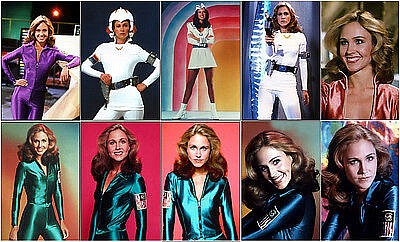 I finally slogged thru most of the Buck Rogers complete series DVD set, and it was pretty much as dismal as I feared, other than a small – very small - handful of exceptions. The occasional left field guest star gave a few minutes of chuckles from time to time, especially Richard “Night Court” Moll, Gary "Diff'rent Strokes" Coleman, the lady cop from Sledge Hammer, Julie "Stupefyin' Jones" Newmar, and the lovely Anne Lockhart from Battlestar Galactica (daughter of Lost in Space's June Lockhart), whose episode was kind of decent if only because she was in it. And Erin Grey’s spandex wardrobe is always eye-catching.

For stories, there was an episode by original Star Trek scribe DC Fontana that didn’t reek, and an ep by noted comic book scripter Marty Pasko that really wasn’t that much better than the others, but a bit of an improvement. I can’t say I genuinely liked a single episode from start to finish, at least until I got to the one where they introduce the bird guy Hawk, altho it’s pretty weird the way he gets a man-crush on Buck when it’s completely Buck’s fault that Mrs. Bird Guy got killed. 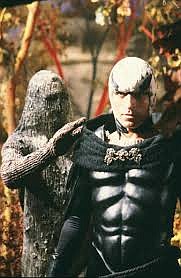 There’s another ep just after that with Mark Lenard from Star Trek that’s quite nearly excellent, with some great action scenes, literal cliffhangers as they climb across the terrain, and a performance from Lenard that manages to be powerful, even tho topped by the most ridiculous wig of the series (which is really saying something, given all the crazy disco hair seen in the nightclub scenes).

I still have a handful of eps to go, and it’s been a mostly dreadful chore getting thru them just in hopes of an occasional guest star surprise (not Love Boat dreadful, but close), however I’m glad I'm finally watching the thing after avoiding it for over 40 years. It’s very of-its-time. Unfortunately, that was a rotten time, as least for sci-fi TV (ever try to rewatch an episode of the Powers of Matthew Star? Pee-yeeew).

I decided to give Nolan's Batman movies another chance by running all three back to back. My opinion remains unchanged, part one is more checklist than movie, a power point presentation of a story everybody already knows. The only things I liked about it was the Batmobile roof chase and Gordon's quick road trip driving it. Gary "Dracula" Oldman makes a good Gordon but is mostly superfluous. The waste of Bale's immense talent annoys me more than I can accurately express.

And starting a trilogy with the Scarecrow and "Batman faces his inner fear" is ridiculous, we need to know Bruce a lot better before we should see him breaking down from a poof of face powder. Scarecrow stories are meant to test the mettle of a middle aged Batman. And all-star turns only distract worse when all you can think is "Hey, that's Michael Caine/Morgan Freeman/Rutger Hauer! What the hell is HE doing here?!" Oh yeah, and burning down Wayne Manor just so he can rebuild it - thanks, Nolan, I never would have gotten that Bruce Wayne re-created himself without that bit of burning celluloid! This is grade school Saturday morning cartoon stuff to people who grew up on tales spun by Denny O'Neil, Bill Finger, "David V. Reed" (I loved those dark knight detective stories), etc. 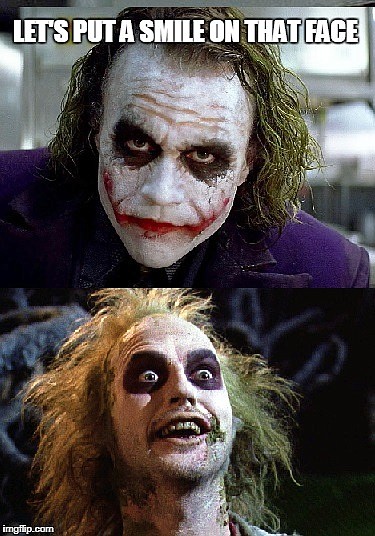 Part two immediately annoys from Nolan's inability to keep his core cast intact - the difference between Katie "Mrs. Cruise" Holmes and Maggie "please stop doing nude scenes" Gyllenhaal makes the two Darrens from Bewitched look like Siamese twins. And I'll never understand how Ledger got away with his lispy Beetlejuice/Little Nicky mashup, I'd like to think that people would have realized how stupid his Joker is if he hadn't died before its release.

In years to come, when there are as many Batman movies as James Bond, Michael Keaton will be looked upon as the Sean Connery of the franchise, and Christian Bale the Roger Moore.