The fight against 5G cell towers moves to Oceanside

If Encinitas can stop them, why not us? 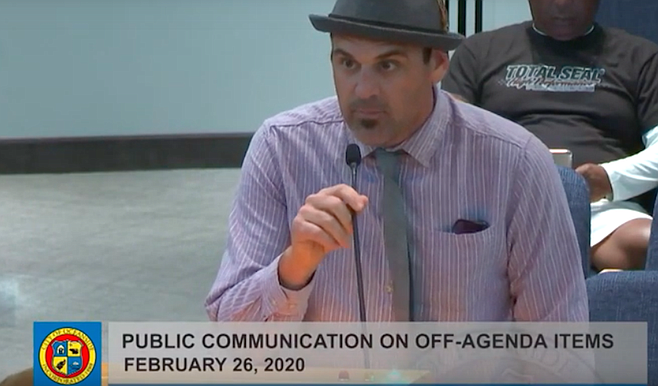 What lowers property values and forces people to leave town? Gangs, poor schools, and overcrowding are the usual culprits.

The newest suburban bane may be the escalation of low-hanging 5G antenna which some medical professionals say cause cancer, sterility, and nervous disorders. 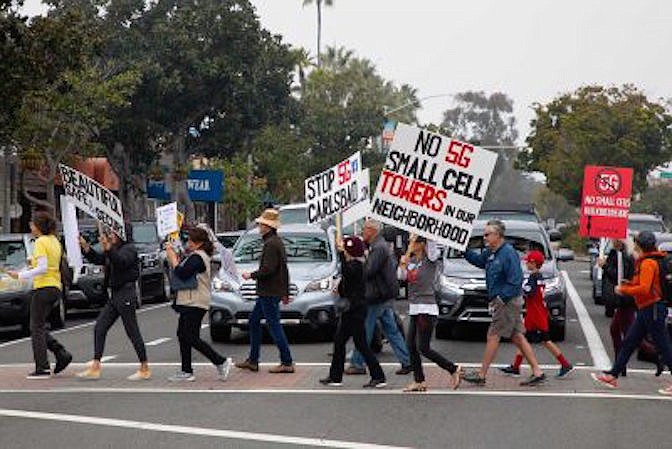 “I was washing dishes when I noticed this bucket lift truck right outside our back yard,” says Oceanside music teacher Pamela Klicka. “I guessed that the other lights on Pala [Road] aren’t bright enough and they were just putting in new energy efficient lights.”

Klicka lives near the Mission San Luis Rey with her five-year-old son and husband Andrew who teaches fifth grade. “But I had a funny little feeling and I started talking to the utility workers. Sure enough, they were putting in a new post for a small cell tower.” 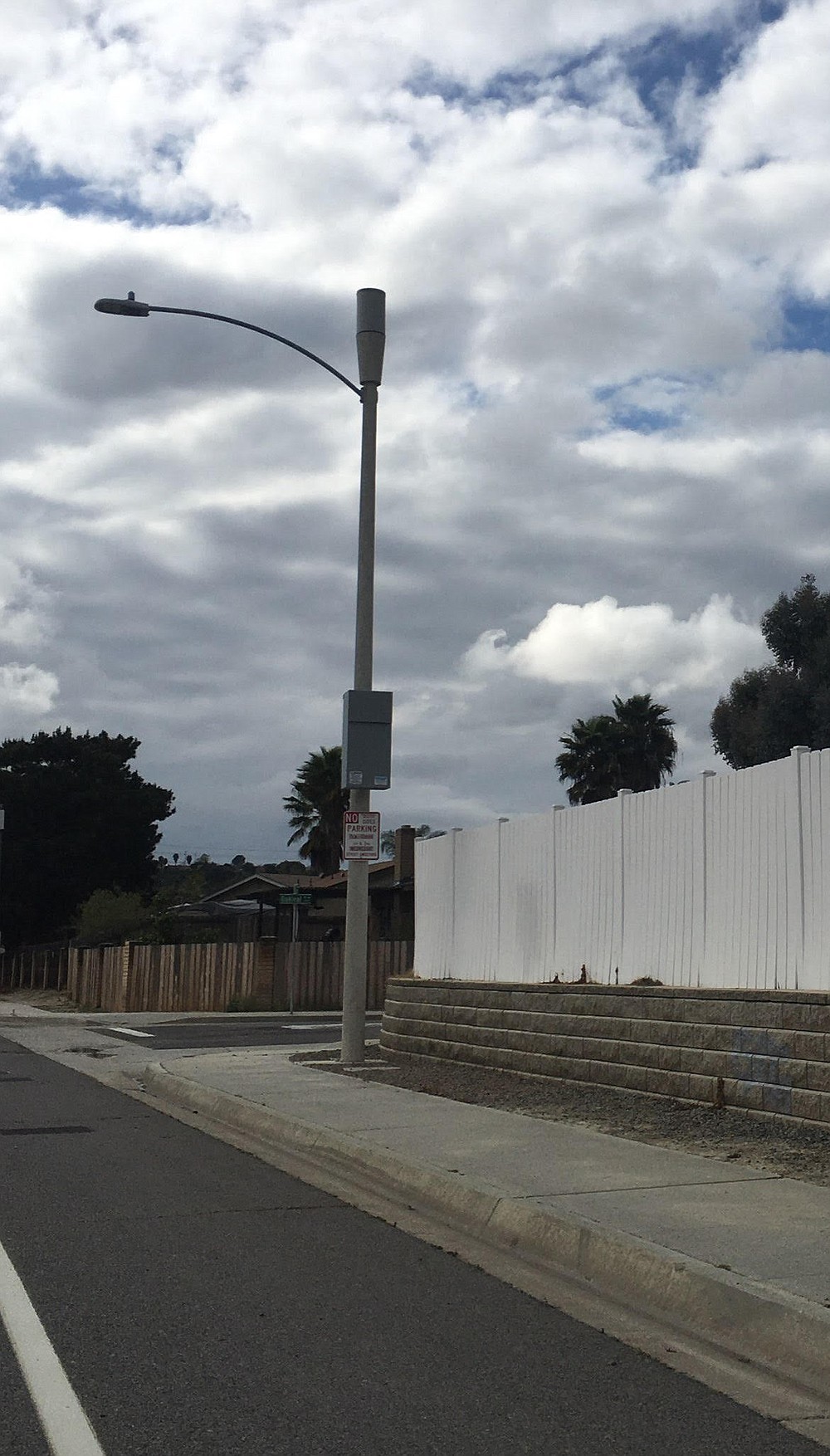 The 5G transmitter that made the Klickas sell their home.

Pamela and Andrew grew up locally. They love it that their son lives near his grandparents. But they say they are now selling their Oceanside home because of an environmental threat they say the city of Oceanside never even bothered to tell them about.

“That small cell tower is being placed in advance of the 5G rollout,” Andrew told the Oceanside City Council three weeks ago. He said he and Pamela found over 200 science journals that outlined various 5G health risks. While he says specific tests on humans have been sparse, he says many scientists have linked 5G adjacency to childhood autism, Alzheimer’s Disease, and insomnia. “We are looking [to move] out of state now….This is taking away our liberty. That’s why I’m speaking up.” 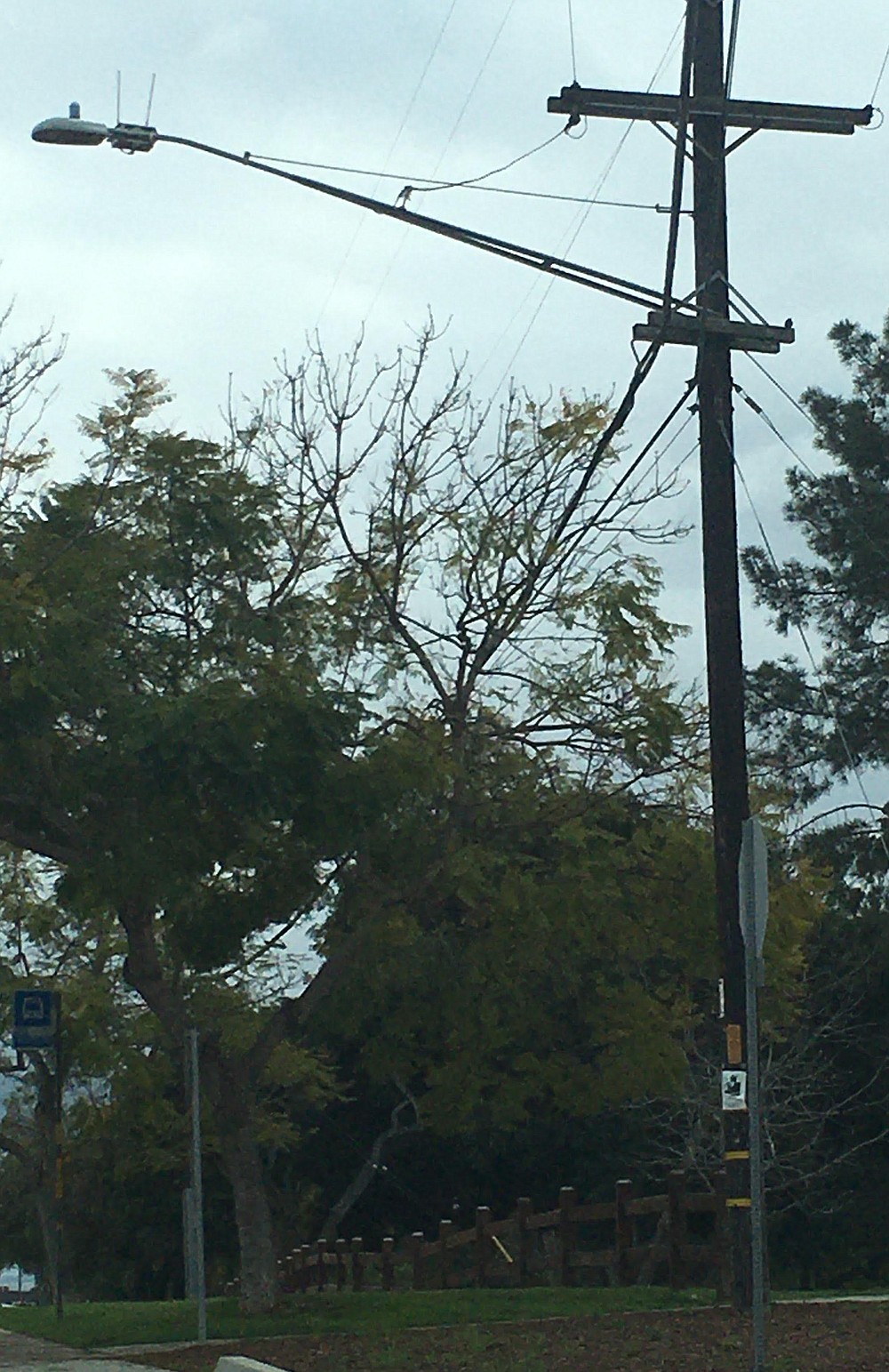 While he says his contact with the city has been courteous and professional, Klicka says the city of Oceanside is being completely subservient to the cell companies who want to usher in this new 5G cell phone platform. He says the city gave him and his neighbors no advance warning that the 5G small cell towers were going up on his street. “Every neighbor we spoke to says, ‘I didn’t notice that.’ It seems sneaky. We would have never bought our house if we knew there was a small cell tower being erected essentially in our back yard.”

Are kids at the Martin Luther King ballfield getting zapped?

“5G towers need to be in everybody’s backyard in order to work,” says Pamela Klicka. “And they need a lot more of them.”

Except for the Klickas, Oceanside residents seem to be much less reactive than their North County neighbors. In January a Stop 5G rally took to Carlsbad streets, and last October, Encinitas became the first city in the county to outlaw the placement of new 5G transmitters in residential areas and parks.

“They passed it because there was a group of 300-strong people who were raising bloody hell,” says Susan Brinchman of Ramona who helped organize the Stop 5G effort in Encinitas. She founded a nonprofit group which runs the website electrosmogprevention.org. “Encinitas has a lot of educated types, who got out and protested. The city wanted to pacify these people.”

Brinchman says that Petaluma and other cities in Northern California have stood up to the cell phone industry to just say no to the new 5G technology. She says 5G is completely unnecessary. “Everyone was happy with their old devices. But the wireless companies had to come up with something new so they could ditch the old technology and get people to spend money on something new. I never had any problems with my 4G phone. Now they want us all to be guinea pigs for this new technology, and they find their own scientists to pooh-pooh the real health issues.”

Even though Encinitas found a way to regulate 5G proliferation, Oceanside deputy city manager Jonathan Borrego says cities in general have their hands are tied by the federal FCC (Federal Communications Commission). “A municipality’s ability to regulate the deployment of small cell antennas [including 5G] is largely precluded by the FCC under federal law…municipalities cannot restrict the deployment of small cell sites on the basis of health concerns.”

Borrego says some cities including Encinitas were able to regulate small cell/5G antennas on the basis of aesthetics. “Because Oceanside has established aesthetic design standards in place, staff is not recommending additional siting standards at this time…We will likely see more 5G antennas in the future.”

So why weren’t the Klickas and their neighbors notified of the installation of the small cell towers in their neighborhood? “Because Federal law requires that such antennas be treated as a ‘by-right’ use, the city does not send out public notices prior to their installation,” says Borrego. “If a resident has a question about a particular antenna, staff is always available to answer specific questions or to put residents in touch with a representative from the telecommunication company.”

Encinitas city councilman Tony Kranz says that health issues were certainly part of the reason why his city council unanimously voted to regulate 5G antenna in Encinitas. “We did everything we could. There is a plan to bring it back [before the council] and tighten it up. There is more work to do.” He says he knows it is “likely” there will be some legal “pushback” from the telecom industry about his city’s 5G antennae restrictions.

Brinchman says she went public with her anti-“electrosmog” campaign when ambient electromagnetic toxicity forced her and her husband to move from La Mesa to Ramona four years ago. “They put in two new towers in my neighborhood. I had it measured. Between 2010 and 2016 there were four times the emissions.” She urges people to unplug their cell phones at night and to make sure they don’t sleep near their smart meters posted outside.

Brinchman says that when the county of San Diego passed its wireless cell phone ordinance last year, [Supervisor] Dianne Jacob, “…admitted there were health impacts with 5G but that she had to vote for it because her hands were tied. County attorneys gave her bad advice.”

All valid criticisms of 5G. The health effects of this technology are internationally well-documented. But all the industries that will profit from this massive infrastructure—and the need to replace all current devices—have too much to gain from letting a pesky thing like public health get in the way.

Unless enough people get educated and demand action from our elected representatives, we will be left dealing with a situation as dangerous as coronavirus, but with no ability to socially distance.

Samuel Paxson- Both sides have real scientific and medical people supporting their cause. It is true the research on humans is incomplete so far although there is one that shows it really nukes mice. At any rate, it is a fact is the City of Encinitas and other California cities have in fact voted to ban 5G transmitters in their communities to varying degrees. That's a reality. That's the story. Government banning of this new unproven technology exists. And yes, the thought that some people's gene pool isn't high enough to reach their ankles does cross my mind from time to time Mr. Paxson.

Put it on my street I want it.

Horse manure. I would hope that those that read the Reader are smarter than falling for this garbage. Maybe those who respond to this have been affected by 5g. It is a BS, MS Phd.