Get out of jail without a trip to downtown Vista 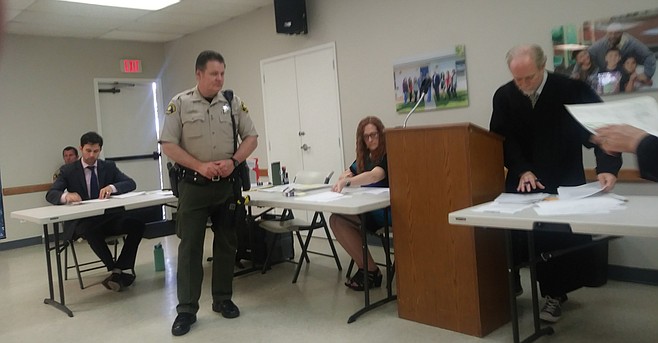 Every time Oceanside’s police chief appears at a community forum to speak with irate residents about the homeless, he makes it clear that his hands are tied. “We can no longer arrest people for being homeless.” Chief Frank McCoy points out that an appellate court decision in a case called Martin vs. the City of Boise ruled that cities can’t arrest or ticket people for being homeless.

The dirty little secret according to employee at an Oceanside-based homeless support program is that area homeless are still getting busted for existing inside a tent. “They give out tickets for illegal camping all the time,” says the staffer who declined to be named and who did not specify which agency is handing out the tickets.

Some homeless advocates say getting tickets for illegal camping is one of those ironic Catch 22s: the tickets demand they appear in court and pay a fine while they often have no transportation to get to court and no money to pay the fines if they do. Summons often go their last known address which is pointless. The compounded “failure to appears” multiply their hardship.

North County superior court judge Brad Weinreb says he is happy to help some people unravel their legal menageries. For the last 18 months he has overseen a monthly court session commonly known as Homeless Court.

Judge Weinreb showed up February 28 at a meeting room on the Vista campus of North County Lifeline in a robe and high-top Converse Chuck Taylor sneakers. His smile and warm demeanor made it clear to the 40 defendants that this legal proceeding was not going to be harsh.

“We want to give you all a fresh start,” Judge Weinreb told the scofflaws who each had a collection of misdemeanors and infractions. He welcomed them to his court with a reminder that the worse thing they could do going forward was to not show up for court. “We can’t work to help you if you don’t bother to show up.”

He explained how this monthly session helps brings the court to the people who find it hard to make it to the main court facility on Melrose Drive in Vista. The Homeless Court session includes the judge, a clerk, two bailiffs, a public defender and a representative of the district attorney’s office. The North County Homeless Court has been in operation since 2005. The San Diego program has been active since 1979.

Each defendant gets only one get-out-jail-free-card: You can only attend Homeless Court once. The participants must either be truly homeless or be facing extreme financial need.

Even though Homeless Court sessions are public hearings, public defender Terri Peters asked that photos not be taken and the names of the defendants not be published.

Peters introduced each defendant, telling the judge how they were now working at a bakery or a gas station or that they had “eight-a-half months sobriety.”

One of the defendants awarded a clean slate was brought to the court by Dad’s Club, a Vista program dedicated to helping young fathers support their children and themselves. “He has been working as a painter and has been dealing with his anger issues,” explains defender Peters.

In order to participate in Homeless Court, one must be presented by a non-profit organization which has vetted you and can vouch that you are willing to show up and participate in case management programs. Those programs, like Green Oak Ranch, Amity, Interfaith Community Services, Casa Rafael or North County Center For Change, each sends a staffer who stands with the defendant in front of Judge Weinreb. Each defendant writes a letter to the court explaining their desire for a chance to get legally untangled.

Judge Weinreb says he is thankful these serial minor offenders can get it together. “The court recognizes your effort,” he says at the beginning of each trial.

Some of the participants left the room in tears including one woman who started going downhill after losing her mother, sister and significant other within one year. “Everyone died in her life,” explained one of her advocates.

Another older gentlemen who appeared as if he didn’t believe what just happened remarked while leaving: “I’m glad they handed this instead of a ticket.” Each person who leaves Homeless Court gets a statement prepared by the clerk and signed by the judge that indicates the warrants have been taken back and the fines forgiven should they be stopped by a police officer before their newly cleaned-up status appears on the court’s computer system. Defendants can now avoid getting their wages garnished and can now get their driver’s license back.

Some of those purged of fines included those who were repeatedly cited for not having paid fare on public transit.

A previous tale told in Homeless Court included how someone lost his car by turning right on a red light. “This was one of the intersections where it says you can’t turn on a red,” says one court participant. “He couldn’t afford to pay the ticket which led to a bench warrant which led to a suspended license. When he was pulled over for driving without a license, they towed his car.” While Homeless Court helped him erase the tickets, the man never got his car back.

Surprisingly, about a third of the Homeless Court participants involved those who were physically or mentally impaired. One lady had a stroke and was confined to a wheelchair.

The North County Homeless Court is held the last Friday morning of every month. The next one is April 24 at North County Lifeline. The March session was postponed due to the annual Stand Down event that will focus only on veterans.

About the 1 who couldn't afford to pay the ticket which result in a bench warrant: as that have to do with a car, I got nothing against how that went. We have too many car/drivers on the road. "Veterans" is the last wording in this article; I have lesser pity for those old ones (not homeless related) -- concerning behaviors I have received from the ones I know of. "Homeless" for the veterans, nowadays, is just a format for the homeless to $olicit one's self. I feel more for the young ones who are active, doing their duty.

Giving out tickets for illegal camping (especially if camping outside isn't illegal) is ridiculous. Does anyone really expect them to show up in court and pay the fines? And where is the money for these fines going to come from? What little money they might have won't go towards court fines, and if they end up in jail it's a waste of taxpayer money. Hopefully Homeless Court is an effective way to at least try to deal with this.

How about setting their "illegal camping" on the northern boundary of the Tijuana River.~

(although my issue is unrelated in direct context) Because this is the closest Oceanside topic spoken in the words with "public transit"; Before I found to read this SDR article, I was searching the website of Oceanside City Council. I found that so many old,longtime members are still on Oceanside City Council; be it that they have graduated higher or remained the same position or whatever. This is no help to the Citizens; be it longtime Citizens nor the young Citizens who want to begin going to city council meetings -- and first had thought to doing it on a regular way of life. Carlsbad has changed more than Oceanside, as I have not yet looked at the other neighboring cities. It would be interesting if that international wave came.........But who knows; only time will tell.