“Being a local, smaller brewery has better longevity than being the next giant” 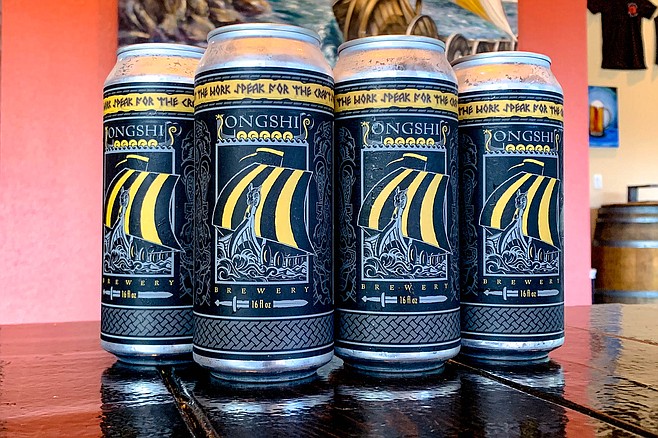 Viking longships were the dominant naval vessels of their time, in part due to their versatility. They were pushed by large, rectangular sails, but also fitted with oars so they could row on, regardless whether or not the wind blew in their favor.

It seems an apt enough metaphor for Longship Brewing Company, currently in the middle of its fourth year doing business on the border of Sorrento Valley and Mira Mesa. To the west of Longship are two square miles of business parks; to the east are housing developments sprawling past the horizon. The Longship tasting room is set up to accommodate both a thirsty after-work crowd coming in for pints starting at 5 pm, and the kid- and dog-toting crowd looking for a comfortable neighborhood brewery on weekends.

But as brewery founder Dan Jachimowicz has seen since opening its doors in 2016, succeeding in the business of San Diego beer no longer means riding the momentum of craft’s prolific rise. The industry’s rising competition and slowing growth means even a company of Longship’s stature — brewing only a few hundred barrels per year — must be prepared to row. “You always have to innovate, you have to change with the times,” he says, “Resting is never going to be an option.”

While in 2005, a small brewery pouring good beer could count on word of mouth to reach its audience, entering the 2020s, Jachimowicz has found that even a hyper local brewery, surrounded by tens of thousands of potential customers, has to stay focused on its internet presence to maintain tasting room traffic. “Having great beer is important, but you have to be able to let people know you have great beer.”

Since opening, he’s devoted resources to this end: a dedicated social media manager, a public relations manager, and a third party company to boost search engine optimization of the Longship web site: just making sure it shows up in Google searches impacts tasting room visits. The brand now has a strong, well reviewed presence on Yelp, Facebook, and Google. It’s even gotten high marks on HulaFrog, a web guide to kid-friendly venues.

Longship keeps an active calendar of tasting room events to drive traffic. Every Tuesday night there’s trivia. Once a month there’s a public small batch brew day, led by Longship brewer Charles Nation. There’s a beer and brushes painting event with a local art instructor, and a burn and brew fitness event led by local chapter of gym F45. All of this contributes to regular customers coming back, and new customers finding their way in.

For this effort, Longship’s growth has been modest, Jachimowicz says each year since opening the brewery has sold about 50 barrels more than it did the year before. While local beer news has been dominated by brewery openings, closings, expansions, and downsizings, he’s been cautious about making any splashy moves, such as adding new tanks to his brewhouse, issuing big can releases, or opening a satellite taproom in another neighborhood. He would like to distribute to more bars and restaurants in 2020, but he’d rather be patient than put the business at risk by trying to grow too quickly, even if it limits potential buzz around the brand. “Being a local, smaller brewery has better longevity than being the next giant,” he reasons.

While Jachimowicz hopes to distribute more to bars and restaurants in 2020, Longship is in no danger of folding, and just singed two year extension on its lease. Jachimowicz says the chance to continue exploring the beer craft keeps the hard work worthwhile. He has has prioritized serving diverse beer styles from day one, whether by always pouring red and brown ales, serving a shandy for less enthusiastic beer fans, or taking chances on an English mild, strong ale, or doppelbock for those curious about something different. Though, like most local breweries these days, a hazy IPA is typically Longship’s best seller, it’s not always the case. “We’ve had several days the pilsner was the top seller,” he reports, and after a big run one day a couple weeks back, “our wheat beer ran out.”

That diverse menu makes Longship’s biggest investment to date all the more valuable: it’s one of the only breweries in town selling 16-ounce crowlers. Customers have never been able to buy cans of Longship beer from a local retailer, but now guest of its tasting room can always take a pint to go, of beer you can only yet drink in San Diego.