“This show really is the end and beginning of two eras” 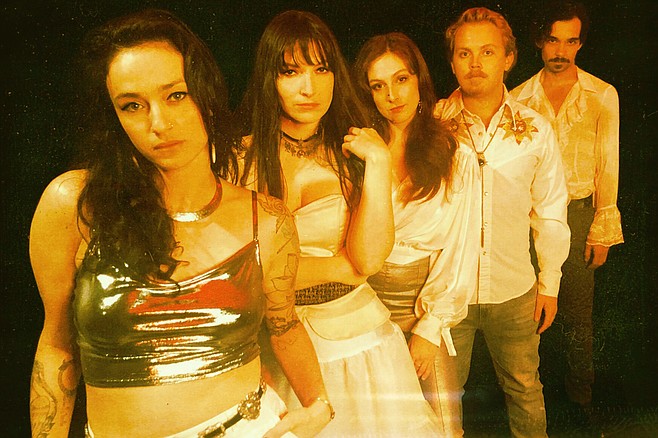 “One side will have all our dream pop songs, and the other has our gothy nasty ’80s songs,” says Belladon’s Aimee Jacobs of the band’s upcoming Dreaming/Dreading EP. “Both sides will have a collection of four songs. We really wanted to bring out the extremes of moods and temperaments we all go through by categorizing the songs this way.”

Fistfights with Wolves and Belladon

The double EP — tracked and mixed in Kensington by Ben Moore at Singing Serpent ­— makes its debut at the Music Box on January 30, where attendees will receive a private download code. “We’ll be doing a public digital release probably a month or so after the private one,” says Jacobs. “This is more like a pre-release for us, because we were advised to hold back the release date for PR purposes, but it didn’t sit well with me to holdback the album from people who really want it. So I thought this would be a cool opportunity to give fans access to the album before everybody else...I'm a big fan of meeting the people who support the music.”

Local funk band Moans ("incredibly fun to watch, and everyone dances to their music") will open, followed by the prog-inclined Le Ra, whose members are spread out among Los Angeles, San Diego, and Tijuana. “They sound like Portishead had a baby with PJ Harvey in Mexico. Our sister band Fistfights with Wolves is closing the night, we share two members with Fistfights, and our bass player is also in Moans.”

“There are a lot of reasons to come to this show rather than other things going on in town. This won’t be your average garage rock band in outdated goth garb or a band that uses backing tracks like people don’t matter. Don’t get me wrong, I’m not a purest, there are times to implement technology, have a dirty sound, or write a sad song. But there is a lack of diversity here, and this event really showcases a wide range of talented, creative, good people who give a lot of fuck about what they do.”

The band will perform both sides of the EP, possibly for the only time with its recorded studio lineup. “One thing that might be a little shocking to people who know us is this will be our last show with Anastasya, our other keyboardist and lead vocalist. It’s a peaceful separation, she’s one of my closest friends. We both started training in classical piano three years ago, right around the time I started the project, and we’ve grown so much as players since that time. We just grew into ourselves as musicians and realized we wanted different things. This show really is the end and beginning of two eras for Belladon.”

Asked about the worst gig of their initial three-year era, Jacobs recalls “We had to do an acoustic set for this industry festival. Firstly, we aren’t an acoustic band, so that was kind of weird for me. But secondly, it felt like we were trapped in a Black Mirror episode. The guy interviewing the bands after performances was so offensive and disrespectful. I actually went backstage while another band was performing and told him to only ask us questions that pertained to the music. His response was hilarious. He told me that people lose interest if you ask generic questions, and there are lots of interview personalities that are similar in their media personas.”

“I told him we weren’t a chipper bunch, and I’d appreciate it if he could find a middle ground.”