"If there is a God, send me an angel"

Every morning before dawn in Ocean Beach, a silver minivan pulls into the parking lot at the foot of Newport Avenue and Abbott Street, parks in the handicapped spot, and out rolls Marc Gervais, Dave Hendon, and Pico, and their 12-year-old Pit Bull/Labrador mix.

“When we first come down we do the ashtrays along Newport, we pick up any butts and stuff around there,” Hendon tells me. “Then we come down here (to the wall) finish up our coffee and start cleaning. Marc sweeps the whole (pier) parking lot. Today, I swept all the way up to the lifeguard tower to the wall. We usually have to wait till it lights up a little bit so we can see all the trash and start picking, but yeah, we’ve been here going on three years now, sweeping everyday.” 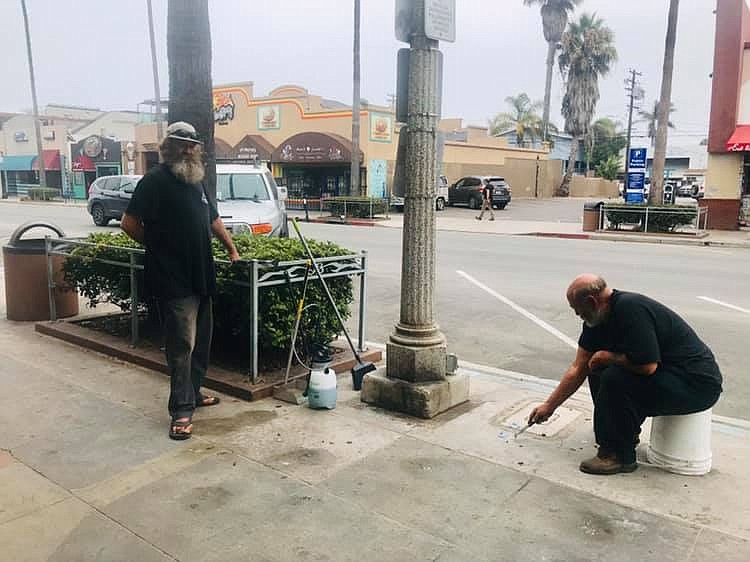 “I’ve been in OB since 2001,” Gervais explains. “Not homeless the whole time, I had to give up my apartment to go to New York to take care of my dad with Alzheimer’s; when I came back, I was in a bad roommate situation. He started doing meth, and it was safer for me to be on the streets. Since I met Dave and we came to be friends, it’s just been great…we were staying at Dusty Rhodes picking up litter every day, we didn’t have the pickers yet, just did what we could. I’ve got nerve damage in my back, Dave’s got bad feet, so it hurts to walk, you know, and I’d pick up as much as I could till my back hurt too much. Well, this woman named Fran noticed us cleaning every day and gave us a van.” 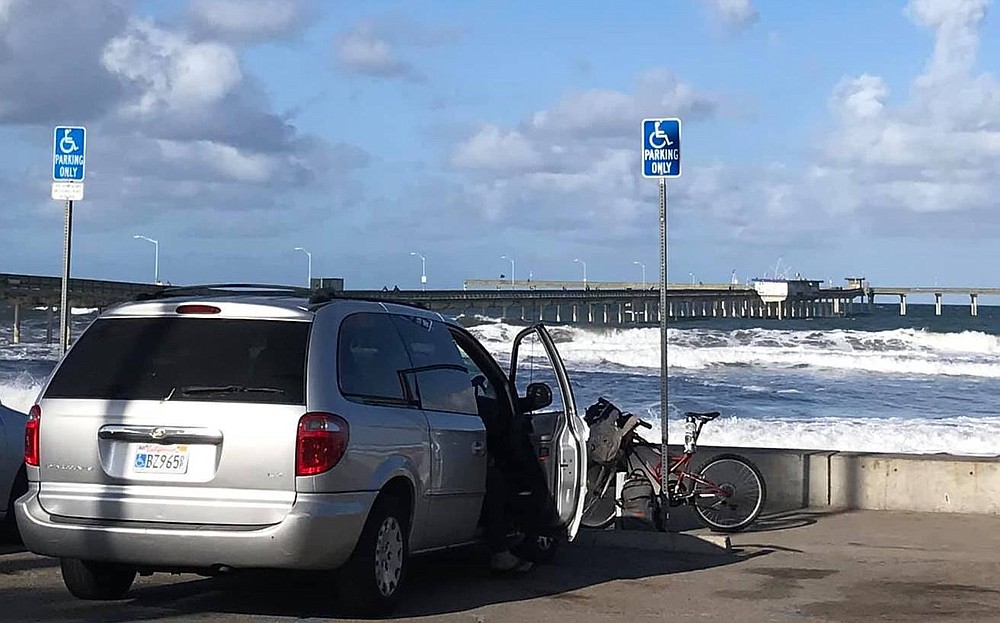 The van lasted three years before needing replacement. A Go Fund Me was started to buy a new (used) van for the men. They got a van, but it remained in the shop for minor repairs. After a few months, the van is operational and OB has its litter pickers back. 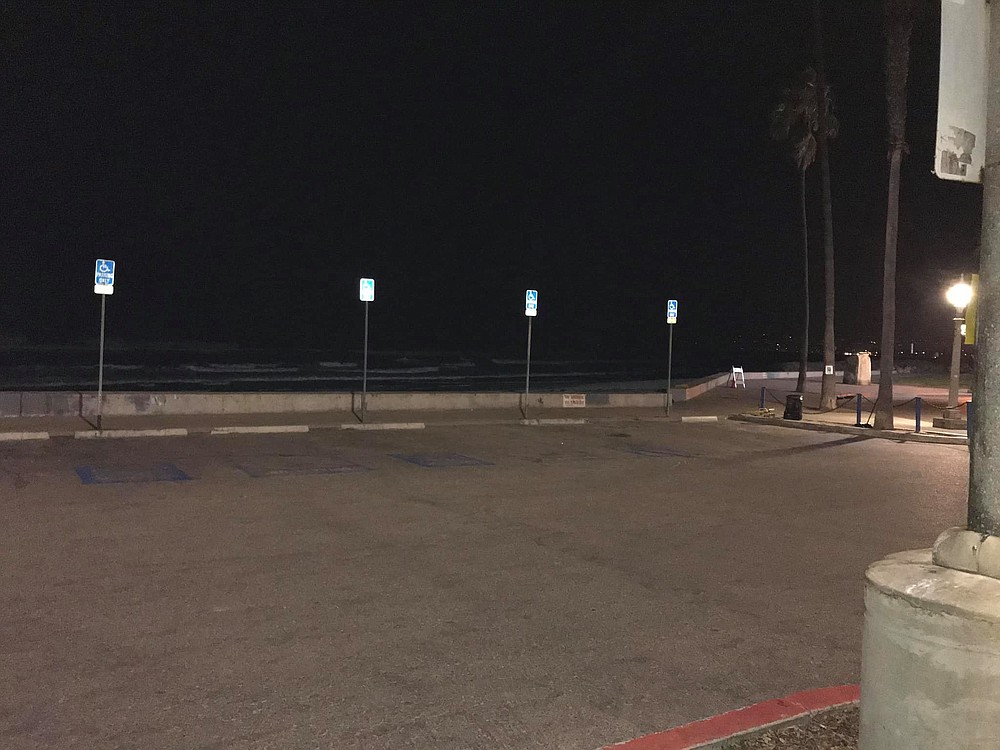 “After Fran gave us the van, the first one we had, we started coming here. We’d get here and pick up a couple of parking spots around us to clean. That’s when we met Brant (Oil Stain Cleaning Company) who went and got us a couple of pickers, so that started it, and it’s picked up from there. We had Kevin Hastings give us a push broom so we’re able to sweep, and Brant brought us down a dust pan and another small broom and a regular hand broom, we just started picking up equipment and doing as much as we could everyday and it's been like that for a couple of years now, going on three years. And we do it wherever we go, every chance we get we’ll go to Dusty Rhodes or Shelter Island and pick over there.” 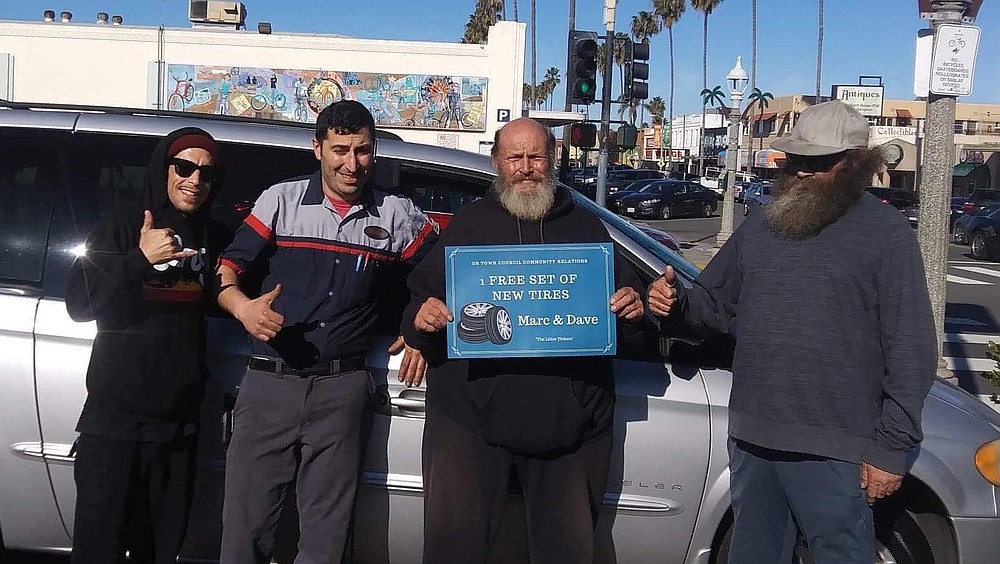 On January 17 Isaac Darby led the charge on behalf of the Ocean Beach Town Council to reward Marc and Dave for their hard work and dedication by giving them new tires for the van.

"Marc and Dave go down to the pier parking lot before dawn every day," Darby writes. "They sweep up the sand in the parking lot and off of the sidewalks around the pier and veterans plaza. They sift out the debris using French-fry baskets, disposing of the trash in the garbage and return the sand back to the beach. They have been out of commission for the whole holiday season and have just returned this week.”

Gervais: “My first being night homeless I slept on the beach, when I woke up the next morning there was a naked woman sitting over there by the hotel and I’m thinking, 'I’m going to like this place.' But I was still drinking and I decided to go sleep out on the cliffs. I was so sick and tired of the way my life was going, so tired of everything and I don’t believe in God, you know, and I was just like if there is a God, send me an angel. So I packed up my stuff, cleaned up around me, as I’m leaving, right where the wall starts, there was a writing pen, and on the top of that pen was a little angel. And I put it in my pocket and I came down here, sat right there on the wall, and this guy in a white van pulled in.

"Now, I knew there was an AA meeting somewhere nearby, so I asked the guy about it, I said I need to find the AA meeting, he tells me he’s on his way there, so I went with him. I used that pen to write my steps and I’ve been sober pretty much every since.

“So far we’ve got three other people we’ve been seeing walk by daily with a bucket and a picker which mean there’s five of us, not counting the guy who inspired us. He doesn’t want to be named.”

“By the sixth of the month, we’re practically begging for money for food, for gas, for everything we need, by the time I pay insurance, loans, credit cards and stuff, trying to get my debts paid down to where my credit score goes up high enough that I might stand a chance of getting in a place, but it's taking forever.”

“It looks a lot better,” Hendon says as he eyes the seawall. “When we come down there’s usually a bunch of stuff on the wall and we just throw it all away. We used to come up on a lot of stuff – like phones, left behind, we’d always return them if we could, which surprises people, like we found a wallet on our way out of OB, it was laying in the middle of the road and it had a hundred dollar bill in it, so we called the guy and returned it to him, he gave us $40, but he was surprised and grateful.”

This is a really nice story. Thank you for sharing...

Marc Gervais, Dave Hendon are a true exception to the rule. Good for them. Some believe that the homeless should be sheltered and that alone would "solve" the problem. There is no one-size-fits-all solution to homelessness. There are four basic groups of homeless: 1. Mentally ill, 2. Working poor. 3. Druggies and drunks, and 4. Bums. The mentally ill should be taken off the streets and institutionalized and not be released until they are able to take their medication and care for themselves. The working poor should receive housing and skills training so that they can get better paying jobs. Employers who pay less than a living wage should lose all employee tax benefits. Druggies and drunks should receive help only if they want to get off drugs and alcohol. Bums don't want to work or be productive members of society. Nothing should be done for them. Those who want to live on the streets should be shunned and run out of town.

But as these are homeless, I have (something) what would be too much value for such people; as they don't yet have such use for it. Rather, they would sell it for cash value. Or else I would choose to give it to them. (as) I already have lost a long-time veteran friend (in wanting to give it to); as many homeless on our streets are said to be veterans. But retired veterans who are not homeless --- such people are a controversial issue.