Big in Spain: The Loons and The Rosalyns rock León 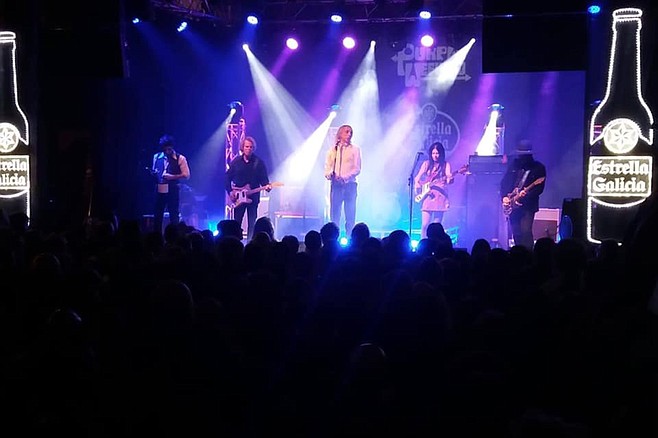 San Diego acts remain big in Spain, a longstanding trend that arguably kicked off when the Zeros stormed out of Chula Vista in the late 70s. The influential punk band has a new single on Munster Records in Madrid, “In the Spotlight,” with an accompanying video filmed and edited locally by Kelly Paige Standard and David Robles. The band also recently reissued their classic single "Don't Push Me Around" in an autographed starburst vinyl pressing with an original insert.

Last month’s Purple Weekend in León, Spain, a psychedelic music fest headlined by the Hoodoo Gurus, featured a return performance by locals the Loons, who traveled the 6000 miles to play their own music, as well as a tribute to Roky Erickson and 13th Floor Elevators. It was their fifth time playing Spain, and their third Purple Weekend, thanks in part to their music being popularized there on Spanish labels such as Munster Records, who recently issued the Loons single "A Dream in Jade Green." Also appearing were locals the Rosalyns, an all-star, all-girl rock band with Anja Diabolik from the Loons and Lety Beers from the Schizophonics alongside Birdy Bardot from the New Kinetics and others.

On arriving in Spain, both bands played a warmup gig at the Fun House Music Bar in Madrid, but the main attraction was the Festival, where “The venue was sold out,” says Loons frontman Mike Stax, “packed in like sardines. Sardines with big feet and sharp elbows.”

Los Dug Dug's and the Loons

They played around 35 minutes of Loons songs and then 40 minutes of 13th Floor Elevators favorites. “It’s a really amazing, validating feeling to see people in the crowd singing along to our songs. I even spotted a few sardines singing along to ‘Eye Society,’ a song we only wrote about a month ago. For the Elevators set, we brought out Manu from [fellow Festival performers] Les Grys-Grys to play jug and percussion.”

Stax and Diabolik (his wife) also played a 2 am DJ set before hopping a flight back to San Diego, where they and their fellow Loons will appear at the Soda Bar on January 25, opening for Mexican garage rockers Los Dug Dug's.

Also big in Spain is Mojo Nixon’s occasional musical partner Skid Roper, whose song “The Rip Raps” is featured on a new compilation from Spain’s SNAP!! Records, Power Chords, Harmonies and Mistletoe II. The same album is packed with tracks from fellow locals such as the Drabs, the Tourmaliners, True Stories, the Shambles, Bathwater Babies, Pony Death Ride, and Jim Ryan. Several of Roper’s local cohorts guest on volume one of the Mistletoe series, including Jose Sinatra, Jonny Viau, and Joel Kmak.

Another new Spanish compilation, The San Diego Underground Files from Spain’s Bickerton Records, collects unreleased demos and rare tracks from local bands of the late 1970s and early 1980s, available digitally or on deluxe 10-inch colored vinyl with inserts and posters. Volume one features another Purple Weekend vet, Manual Scan, whose frontman Bart Mendoza wrote extensive liner notes for the set. A local album release show takes place at the Casbah on January 16 where Manual Scan will play, along with Mittens and Avenue Army. Future volumes will spotlight San Diego bands such as the Event and Four Eyes.