The weighty stuff sneaks up on you. 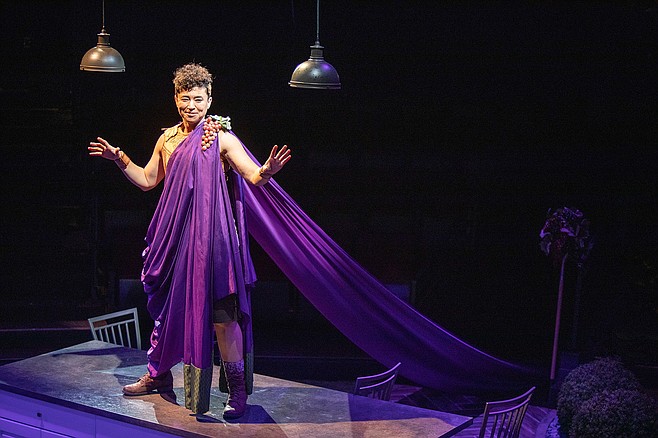 There are many amusing moments in Madeleine George’s Hurricane Diane. That's to be expected, given its premise: sending the Greek god Dionysus — here rendered as the butch lesbian Diane — on a mission to recruit four present-day New Jersey women into the ranks of her devotees. (For reasons that might have been made clearer, she needs all four; as it is, it just helps raise the stakes.) She poses as a landscaper, and while it’s one thing to ask the god of agriculture, wine, and song for a backyard that mimics the mural of an Italian garden gracing the wall at the local deli, it’s another to pester her for a wrought-iron accent bench — one you happened to spot in the pages of HGTV Magazine — because it’ll help to up the curb appeal of your cul-se-sac domicile. (Cul-de-sac, of course, is a fancy French way of saying dead end. It goes nowhere, leads to nothing: the polar opposite of Dionysian fecundity. Diane wants to re-weave the ecological web that bound all life on earth before we started cutting it up with curbs, and you’re asking for lawn furniture?)

But amusing moments aside, it’s hard to call the play a comedy. It’s hard to see a play open with Dionysus looking for acolytes and not think of The Bacchae, Euripides’ bloody tragedy about the nightmarish fate that befalls those who fail to worship Diane. (The program gives this point generous consideration.) And here as there, she’s quite sincere in her desire for worship. She’s not chasing a metaphor — say, seeking to inspire in her followers an expanded consciousness regarding the environment and a new dedication to permaculture. Yes, she wants those things: she left her lesbian commune in New England because she’s worried that humanity is readying to wipe itself out via climate cataclysm, forcing her to high tail it back to boring old Olympus. But more than that, she wants Maenads: wild, possessed women who will abandon their lives to join in her revels. As in The Bacchae, the god is a proper character. And this is not a mission trip; it’s a comeback tour.

That’s a good thing, drama-wise, because it keeps Diane from being an environmental scold. Rather, she’s much like the women she’s seeking to convert, women who, at the outset, just want their world to be the way they want it to be. Diane doesn’t love them; she doesn’t even love the planet. Diane loves Diane. Accent-bench-Carol is right to note that Diane gives nothing, compromises none of her desires, in her gradual seduction of her targets. The divorcee frightened of her own desire, the professional trapped by her own striving, the grounded gal with a yen for spirituality — in every case, it may look like the god has come to set a captive woman free. But free to do what? Saving the planet is here strictly a means to an end, which makes the final showdown between holdout Carol and frustrated Diane more complicated — and more interesting. But not more comedic.

Which is part of what makes James Vásquez’s production impressive, because for much of its duration, it really does feel like a comedy — or maybe a dramedy. The weighty stuff sneaks up on you. Maybe it’s when the seductions start to rely on power plays. Maybe it’s when you consider that all agriculture involves cutting up the world — if you want wine for your bacchanal, you had best protect your vineyard from the rest of ravaging nature. But for the longest time, it’s just fun to watch eternal Diane go up against modern-day women, and to watch those women work things out amongst themselves. They may be New Jersey wives, but they’re not reality-show punchlines: they know themselves, they know each other, and they know the worth of the world they’ve built. Jenn Harris’ Pam Annunziata makes a powerful case for hurricanes as builders of civilization when she recalls how the community came together after Sandy hit. “As long as I live, I’ll always be grateful for that night. It showed us we could rely on each other when the shit hit the fan.”

Diane has something else in mind: a storm so strong it will wipe out the current order and make way for something much older. It’s a violent vision — one that ought to unsettle any audience that enjoys its technology and creature comforts and stable relationships — and so Rami Margron as Diane must seduce us just as much as the intended Maenads. They seek to accomplish this through fierce, restrained energy and a charisma that borders on swaggering arrogance — just what you might expect from a neglected god who can still remember the glory days. And when the restraints snap and the truth comes out, it gets easier to remember how The Bacchae ended, laughs or no laughs.