Hangin with the kitties of The Cat Café

A little caffeine, a little feline companionship, a lot of sweet purring 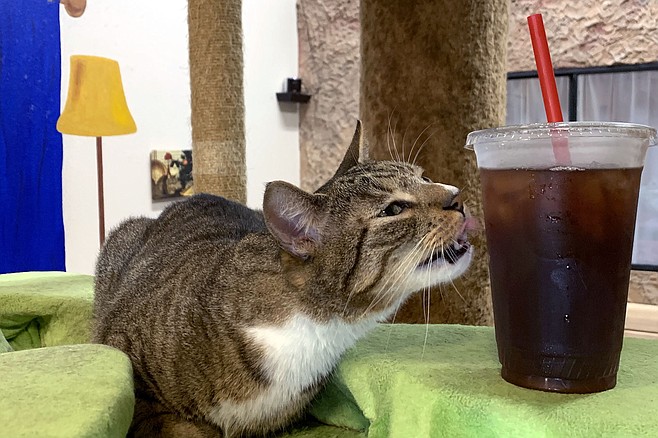 Casanova has taken an interest in my iced tea. He eyes it warily at first, then leans forward for a closer look. Then he bares his teeth like he’s mad at it, but instead reaches out to take a lick. He’s not the only feline here curious about the condensation gathering on the outside of my cup. I’ve stopped in for a drink at The Cat Cafe, where as many as twelve cats may be lounging on any given day, available to pet, play games with, and if a connection is made, adopt.

Located just on the outskirts of the Gaslamp Quarter, across Third Avenue from the Horton Grand Hotel, Cat Café operates like a normal coffee shop if you want it to. Walk in the front door and veer right, and you’ll find a short counter offering espresso, tea, soft drinks. cookies, pastries, and pre-packaged sandwiches. If that’s all you’re after, there’s a patio out front, with shaded tables that prove a chill downtown spot to while away blue sky days. 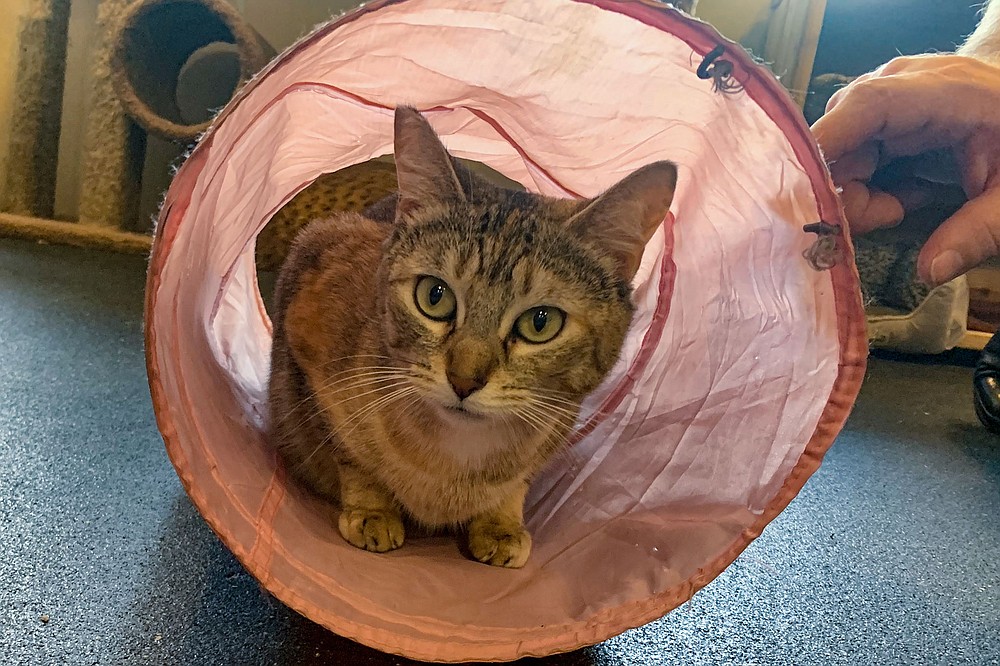 Flora plays in a cat tunnel.

However, if you’re here for the cats, paying an $8 flat fee nets your choice of drink or food item, plus a half hour in the cat room. If you’re especially serious about it, you may reserve an hour of time in advance: pretty much the same deal, but for $12.

The room is half furnished with human furniture, half with a combination of cat towers, scratching posts, and wall mounted beds. The cats lounging in this environment have been rescued by nonprofit The Rescue House, and every one is available for adoption, to the right home. A binder lists each cat by name, along with stories about where they were found or where they might have come from, and other info, such as whether they’re known to be compatible with kids, live well with other cats, or have been socialized with dogs. 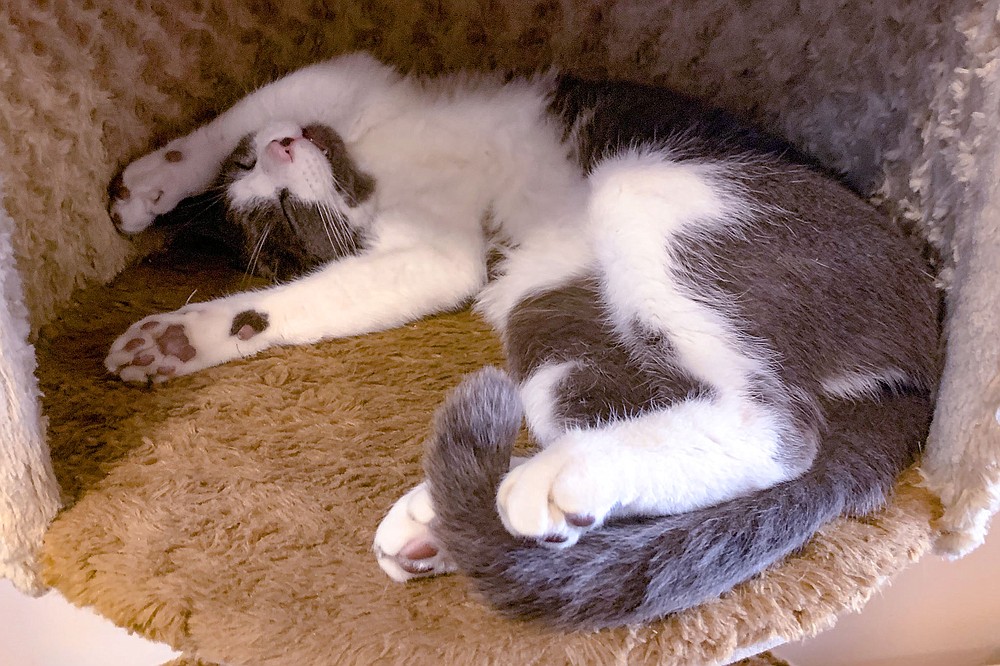 Raylan can't be bothered to lift his head, but definitely enjoys attention.

For example, my new friend Casanova is a four-year-old short hair lazing in his favorite spot, near the top of a palm tree-shaped cat tower near the center of the room. He’d been adopted through Rescue House as a kitten, but the family he’s grown up with moved into a new home and he didn’t acclimate well to the new digs. 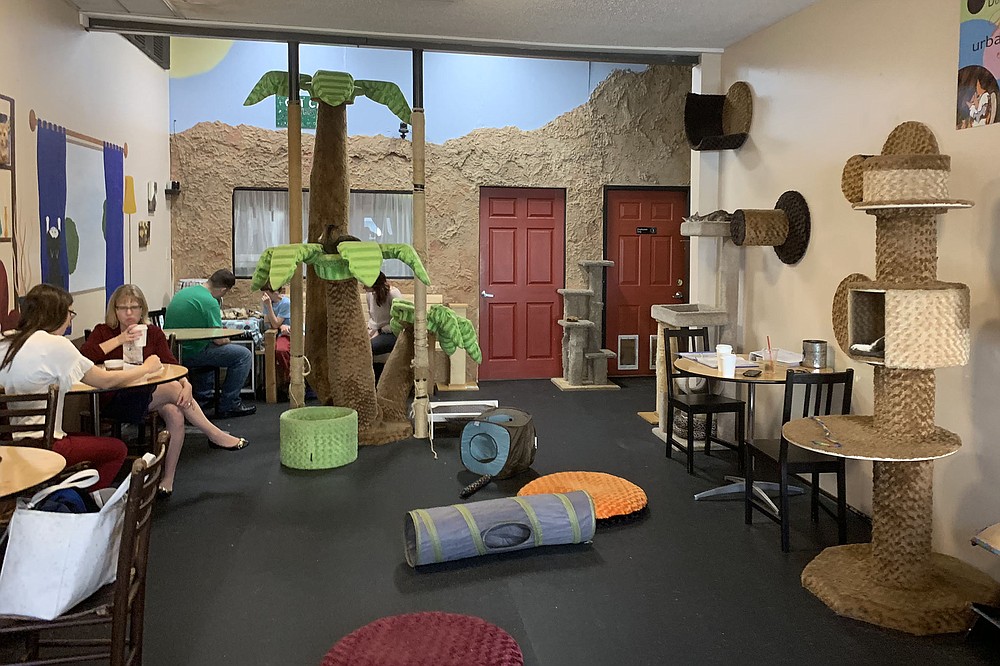 More playful during my visit is three-month-old Flora, a gray and orange tabby found scavenging the streets of Tijuana with a couple of her littermates. After I use my iced tea to coax her through a small play tunnel, she studies me with pale green eyes. I didn’t come here looking to adopt — like most of the guests here, I’m mainly looking to casually meet a few cats while I caffeinate, then see where things go. But when you meet an adorable kitten such as Flora, it’s tough not to consider filling out an application, and hoping your home is a good fit. 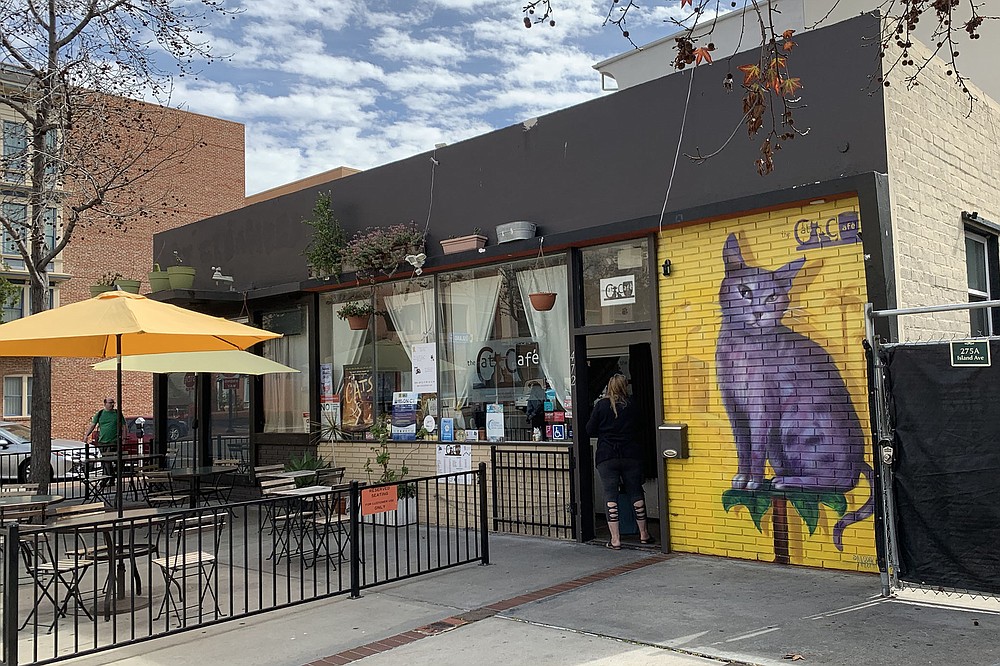 Still, my favorite today has to be Raylan, a four-year-old gray and white male reportedly rescued from a home of thirty cats after their owner entered treatment for mental health issues. The Rescue House is seeking a more tranquil environment for Raylan’s next home, and he’s doing his best to reinforce the notion. I find him splayed in languorous repose, half napping with pink nose and paw pads pointed skyward. He barely responds when I gently pet his belly, other than to purr deeply and stretch deeper into his recline. I may have found a kindred spirit!

I hope one is not subject to a a rigorous CATechism before being allowed. It's rumored Ted Nugent ("Cat Scratch Fever") is permanently banned from the cafe, but he CATegorically denies it. ;-)

What a cool café!

I am really surprised. Oh...