Dinner With a View brings circus dining to San Diego

The thing to remember about a dome, is that it has no point 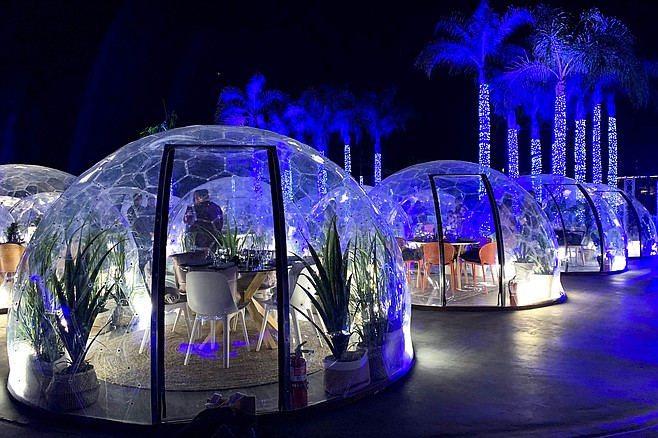 Last week, behind a lot of online promotion, the pop-up dining event calling itself Dinner With a View rolled into a Liberty Station courtyard for a month-long residency. Its pitch: “A completely luxurious dining experience in a highly unexpected setting… a wondrous environment perfect for sharing via social.”

Dinner With a View

That “wondrous” environment has everything to do with the fact Dinner With a View serves guests inside clear, plastic, geodesic domes, just large enough to seat six for a meal. In essence, the dinner invites instagrammers to come out from their social media bubble… to dine inside an actual bubble. 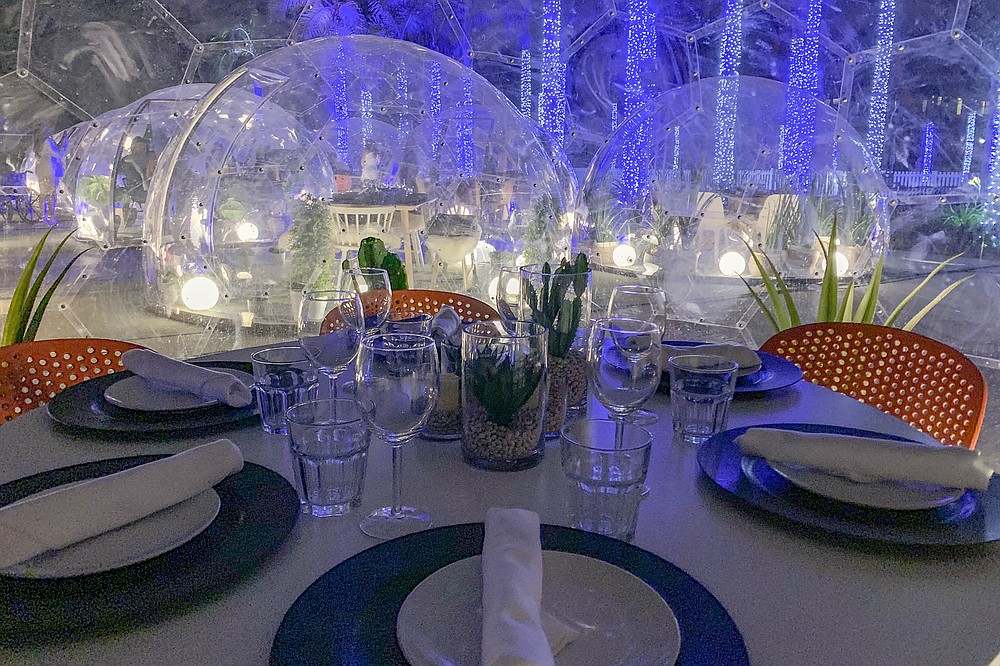 From inside the dome, most of what you see are other domes.

The spartan courtyard of a former military barracks doesn’t exactly scream luxury dining with a view, but the courtyard’s palm trees have been bathed in blue light, with Christmas light strands coiling tightly up their trunks. This lighting design sets off the domes themselves, which are lined up in rows, each lit from within to reveal eclectic table settings, no two alike, though all featured plastic green plants plus lap blankets and heaters. That’s about it as far as views go. You take a look around at all the domes, line up for a drink at the outdoor bar, then unzip a flap to duck into your designated dome — this is true — and wait to be fed.

But the general asking cost for this is $100 or 200 to reserve the dome, plus $110 per person for a party numbering four to six. Beer, wine, and cocktails not included. Disclosure: I attended the free media preview kicking off the dinner’s February to March 8 run at Liberty Station. 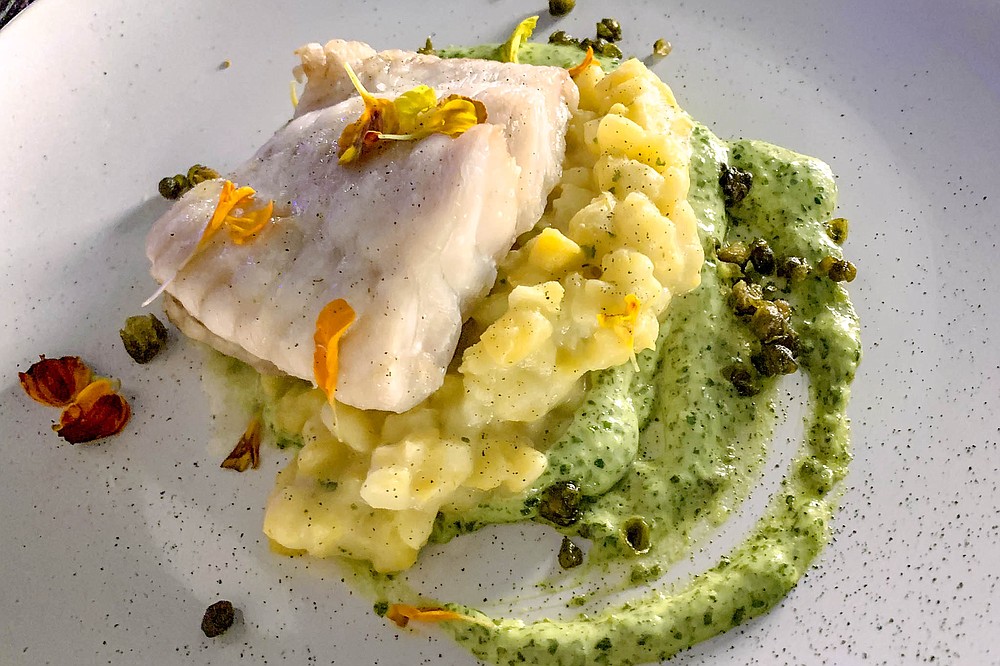 The fish entree at Dinner With a View

What the whole thing reminded me of most is a circus, particularly Cirque du Soleil road show. A crew rolls into town, painstakingly assembles all these domes, dresses it up with clever lighting design, then invites guests in for a show, before tearing it all down and moving on to the next town. Except nobody’s doing backflips, here, the show is just dinner.

For that, Dinner With a View has been recruiting chefs from cooking shows to create the meals. They enlisted a pair of Top Chef Canada alums for Montreal and Vancouver pop-ups, and for San Diego they tapped former Top Chef and Top Chef Mexico competitor Claudette Zepeda. 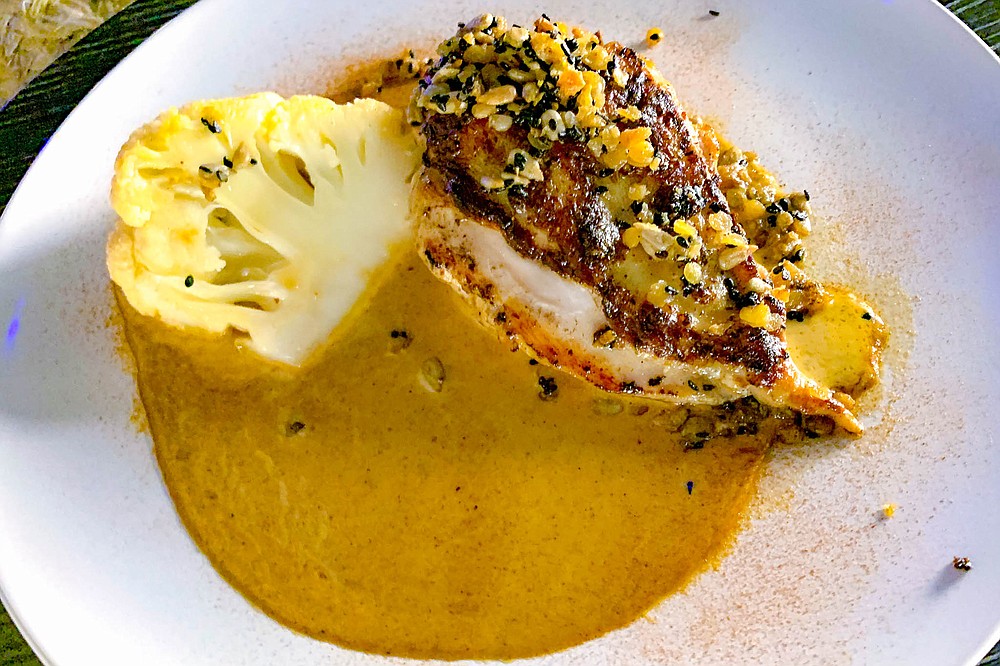 The meat entree — chicken breast — at Dinner With a View

I’m sure enlisting Top Chefs always generates excitement for these dinners — I’m a fan of Zepeda myself. But as the night progressed, it helped the impression that this is less like a luxury meal and more like the outcome of a reality cooking show challenge. “Chefs, your challenge is to build a restaurant out of bubbles and feed 120 people in under two hours. Go!” It's not representative of any chef cooking a proper restaurant meal.

It doesn’t help the price that diners don’t know the dinner choices beforehand. When making reservations, your only choice is meat, fish, or vegan. Getting info about the meals was impossible prior to service, and unreliable during it. The meat wound up being chicken, the fish was baked whatever your dome’s server thought it was, and the vegan was a bunch of thinly sliced root vegetables stacked upon one another and described to me as a terrine. There were high points and lows to these dishes, but I would not describe a single one of these platings as the luxury dining advertised. 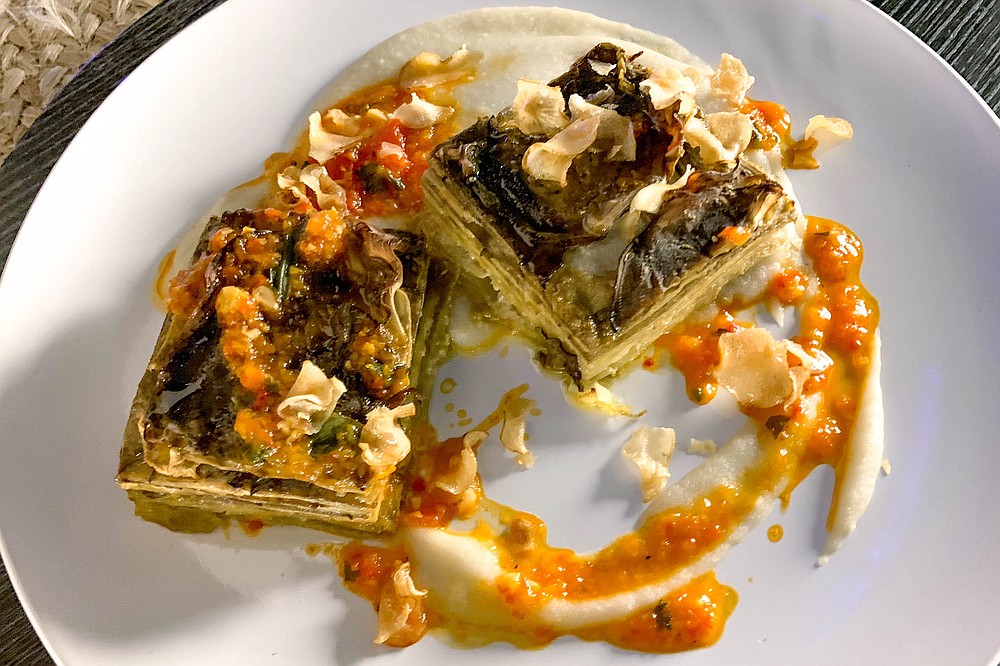 The vegan entree at Dinner With a View

Nevertheless, what people pay for is the view, and the dinners are 70 percent sold out at this writing. Once you’re seated, enjoy the ones you're with, because they'll be what you remember most about the experience. While you do get a warped view of other domes beside you enjoying their meals, the sad trust is that the plexiglass hexagons composing every one of these domes has been scratched and blemished during transit, some to the point they’re no longer as transparent as the gimmick that brought them here.

I had friends that went on Saturday and they were not happy with the food. They ended up being seated after 10pm for a 9pm reservation. That being said fun atmosphere.

Maybe the scratched domes can be donated for homeless housing, making them into tiny dome-i-ciles. Might need a quick paint job, though.

Disappointing to hear about the food, it at least in the pictures looks amazing!

Half of that is the meal presentation. Like any advertising, it's supposed to look very good (even it is isn't).

I don't THINK so.

Their website has said "70% Sold Out" since it's first day. They probably just say 70% to make it look like it's in demand.

I read the reviews about this from their Canadian events and they were no good.

Solid two-stars on Yelp. Half are one-star. 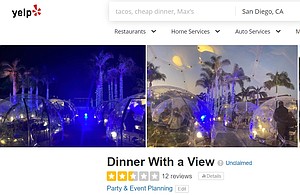 Try Jake's Del Mar. A friend very familiar with it says THAT's dinner with a view. And great food, too. No gimmicks. 4 stars on Yelp.

Jake's is a fantastic view because it's right on the sand. Fun for sunsets and people watching. Food is excellent.