The other Baja adrenalin rush 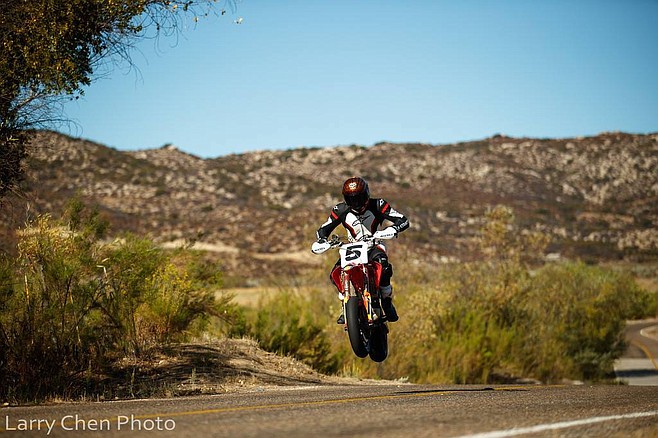 On September 20-21, a small group of off-road racers skipped the inaugural Baja 400 in Ensenada to race against one another towards the highest point on the Baja peninsula.

“The San Pedro Martir Hill Climb is the longest hill climb race in the world at 18.64 miles,” said Spencer Steele. “This is the second time I’ve raced this hill climb; the first time was in 2018.” 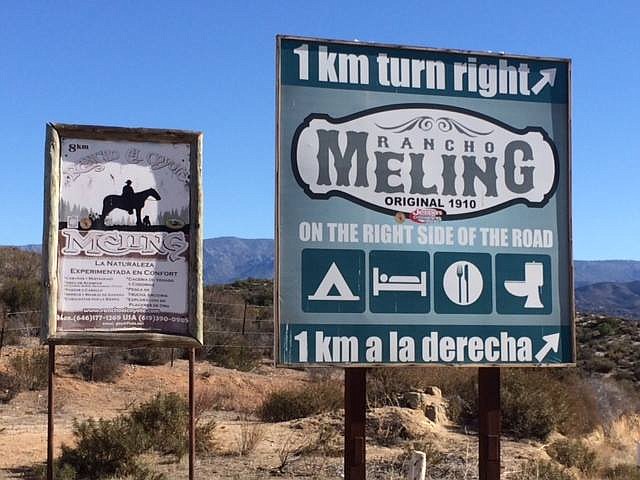 The Meling ranch has power for four hours in the morning and evening.

Steele trailered in his 2013 PVA Arnold-Kidwell Special race car from his residence and race facility in Denver, Colorado, over a thousand miles away, in hopes to beat his previous 15:59 record here.

“What’d you do different to your vehicle, compared to last year’s run?” I asked Steele on September 28.

“We adjusted the steering rack height to make the car handle better at speed;” he responded. “…. the car [can] reach a top speed of 180 mph [via] a Chevy SB1 with twin Garrett turbos that produce 1,400 horsepower at 22 pounds of boost, and it has a 1994 Lola Indy car transmission.” 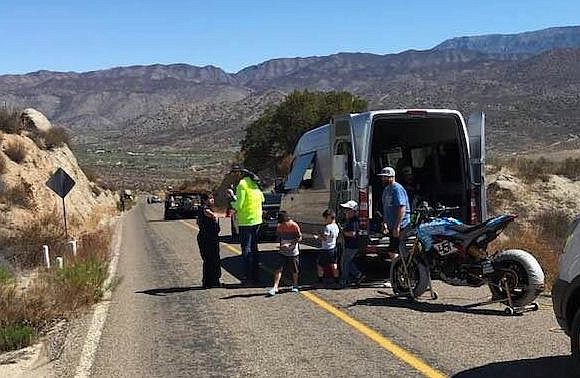 Randy Farmer getting ready: “This is not an event you decide a week before to attend.”

Unlike the lifted vehicles with knobby tires down the hill, Steele’s single cockpit “F-1-esque” looking race car, has racing slick tires. The low-stanced vehicle is adorned with lightweight carbon fiber parts that Steele and his crew fabricated back home, including: side pods, undertray/tunnels, and wings — to keep the vehicle planted on the roadways.

“The car produces 5,000 pounds of downforce at around 80 mph,” he said, “which helps so much for cornering.”

The circa 2017 hill climb course that’s located about 90 miles south of downtown Ensenada, has 150 turns — some overlooking deep and “echoing” ravines. The race starts at the KM50 mark of the highway named after the Observatorio de San Pedro Mártir, about 3000 feet above sea level, then it ascends to the KM80 mark, about 9000 feet above sea level and close to The National Astronomical Observatory. 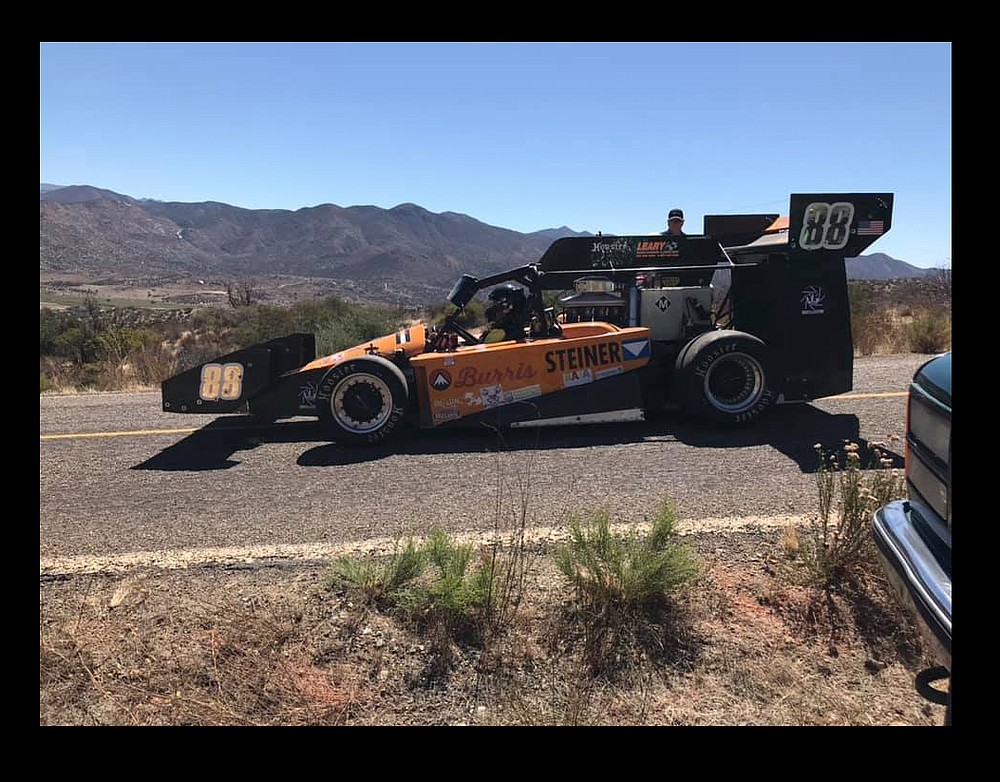 Pedro Vargas-Valdez from Tijuana is the founder and chief steward of the hill climb race; he’s participated in the Baja 1000 off-road races.

“I did talk to the SCORE Baja 400 guys about a possible interference with our hill climb,” he added, “and they assured me since January that the courses would not interfere.” 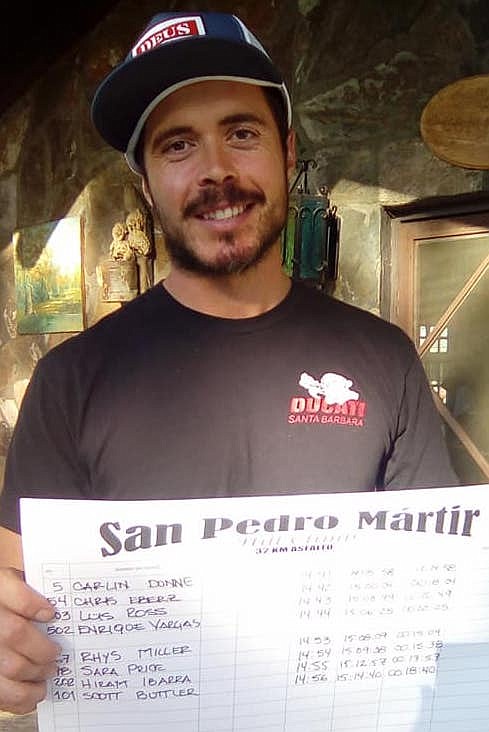 “The national park of San Pedro Mártir has two entrances, one from San Telmo on a paved road, and the other from San Matías through Mike’s Sky Ranch; the road from Mike’s dumps into the paved road from San Telmo, two kilometers before my race start.”

Eberz was one of seven bikers that raced up the hill this weekend; he pulled a 18:37 timeslip on his Honda motocross bike which garnered him a fourth-place finish among the ten racers.

Randy Farmer finished a minute after Eberz on his Ducati street bike.

“This is not an event you decide a week before to attend,” Farmer said. “The logistics of getting in and out of Mexico and arranging your accommodations and other needs is all part of the challenge.”

Farmer left his Lincoln, Nebraska home on September 14 and crossed into Tijuana via the San Ysidro point of entry on September 18.

“[We] zipped right through, but had to go back inside and get a seven-day tourist permit because I was traveling south of Ensenada,” he said.

Farmer rendezvoused with the other racers at Rancho Meling, where they and accompanying family and friends, later crashed out. “It is two hours from the main road,” he said, “and an hour south of Ensenada. The ranch only has power for four hours in the morning and evening, and cell coverage is limited. It is remote and very unique, and exceptionally beautiful. You can see the Milky Way incredibly well.”

On Friday the 20th, the race vehicles had tech inspections, and the racers were allotted four practice runs. On Saturday at 10:30 a.m., the official hill climb races began where each racer was allowed two runs.

“This is not Laguna Seca or Daytona,” Farmer said, “the riding though, is better than anything I have ever been on: wide open winding roads, curved mountain roads, tight slot canyon-like roads, uphill, down hill, off/on camber, bumps, sand, gravel, and the course changes every run depending on what might be on the road. They do a masterful job of closing the road and cleaning the sand – but it is Baja, and some people don’t use the roads and could sneak onto the course by accident, or animals can wander onto the road. But those are risks at Pikes Peak as well. It is a real thrill to blast around a rock-walled corner – hoping nothing is on the other side.”

Fortunately for the racers this weekend, no crashes occurred.

On Saturday night at about 8, the awards ceremony took place inside one of the log cabins on site. Steele beat his record last year and took home first place. “Another day, another broken transmission,” he said. “This was the one and only run we made Saturday after the transmission broke after the finish. We were still able to pull out a 15:21 and claim first overall for a second year in a row.”

“Our 2019 race was dedicated to the memory of our current overall record holder with a 14:58, and 2017 champion — Carlin Dunne,” Vargas-Valdez said. “It was a sad day for us, but we found relief knowing that his departure was at the top of his career and enjoying what he loved — rest in peace, friend.”

Dunne died on June 30, after he crashed on his 2019 Ducati motorcycle at the Pikes Peak International Hill Climb; he was 36 years old. The Colorado race organization has since banned motorcycles to race at their course.

Both Farmer and Steele said that they will return to Ensenada in 2020, to race at the next hill climb.