The way Lester Bangs loved it

Bangs, vis a vis Cameron Crowe, claimed that rock would cease to be real when it ceased to be “gloriously and righteously dumb.” 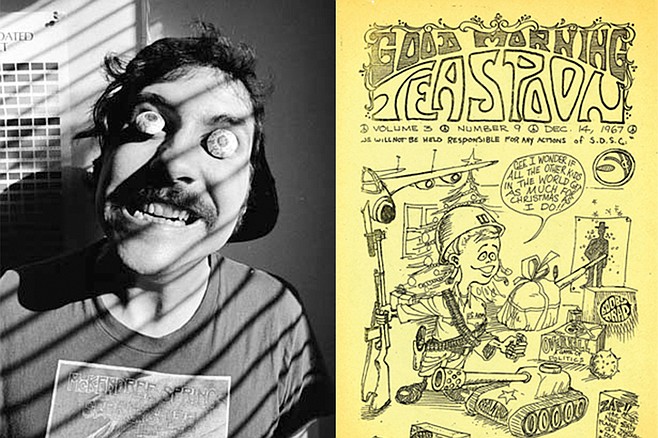 “It’s just a shame you missed out on rock ’n’ roll,” a 1973 Lester Bangs tells an emerging music writer he’s taken under his wing, “It’s over. You got here just in time for the death rattle.”

This is one famous San Diego-bred music journalist speaking to another, lamenting the death of a cultural moment, in a scene from Cameron Crowe’s movie Almost Famous. It recurs in the highly anticipated musical adaptation of the nearly 20-year-old film, now running at The Old Globe Theatre til October 27.

Rolling Stone journalist turned filmmaker Crowe grew up here, and famously went undercover as a student of Clairemont High School to write the book, then screenplay, Fast Times at Ridgemont High. With Almost Famous, he delivered a more personally autobiographical tale. That teen taking notes from Lester Bangs represents Crowe, getting to the classic rock party too late, at least according to his mentor.

Lester Bangs, a product of El Cajon, had recently moved to Detroit to become one of the most influential music critics of the his era as editor of the national rock magazine Creem. (He reportedly missed the burritos.) By the time we meet him in Almost Famous, Bangs is busy heralding the arrival of punk, metal, and other splinter genres.

The two writers connected by both contributing music pieces to one of the city’s original alternative press publications, though 1960s parlance favored "underground newspaper." The San Diego Door covered politics and counterculture through the late '60s and '70s. The Door had started out under the name Good Morning Teaspoon, and ran stories with first lines such as, “God must have liked cops; He made so many of them.”

The rock and roll moment Lester Bangs so bittery mourned coincided with the rise and fall of San Diego’s underground press, as most of that original spate of alternative papers had died out by the mid-'70s. Bangs, vis a vis Crowe, claimed that rock would cease to be real when it ceased to be “gloriously and righteously dumb.” Could there be a correlation to the death rattle of a countercultural paper, one that also ceased to be righteously dumb?

If so, as with rock music, other forms rose to replace it. And others to replace those. After all, when cultural moments don’t pass into fond recollection, they risk becoming institutions, and therefore lose their underground or alternative street cred anyway.

That is, if you choose to believe Lester Bangs, the very embodiment of a critic, pontificating less about the end of something he loved, perhaps, than about an end to the way that he loved it.