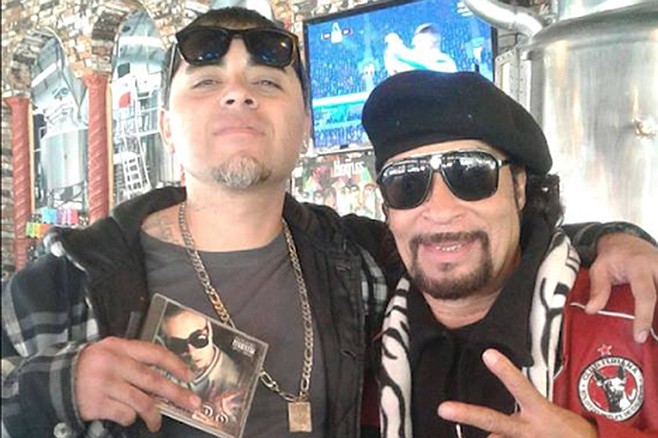 Mr. Oro sells his El Sacrificio De Oro CDs and Oro Wear brand clothing to Americans at the Tijuana/San Ysidro Port of Entry as they return to the U.S. “Here in Tijuana it’s a lot more of a struggle as a rapper,” he said on August 20, “but I’m doing okay in the music scene, because I had no choice. I had to find a way to survive after being deported.”

Oro used to live in Chula Vista and San Antonio, before he was locked up for seven years and then deported. “I got four for a state case and three for illegal reentry [into the U.S.],” he said. “This music has opened up my eyes, and the people’s support kept me focused and outta trouble.”

U.S. Army and Air Force veteran Carlos ‘Zebra Knight’ Zedukes met Mr. Oro while in line to cross into the U.S. back in October 2018. They chatted for a few minutes. “I heard his CD with 17 songs,” Zedukes said, “and knew he had chance for a gold record in Mexico, or somewhere in the world.”

Oro raps in both Spanish and English about the hard life and “come-ups” living in Tijuana; he also “flows” about partying with his homies, and about their ramflas (lowriders), and girls.

Zedukes is the owner of Shock Da World Recordz, a production company in Rosarito. He is also a professional percussionist that has opened up for Ray Charles, Sheila E, and Nena (“99 Luftballons”).

Zedukes has since assumed the role of manager to Oro, and they are collaborating on some new rollos (songs). On October 11, the pair will attend the Ghetto Dreams edición Tijuana freestyle rap contest at the Anfiteatro ICBC venue in Zona Rio, which is about two miles south of the San Ysidro/Tijuana border.

“I’m more of a writer,” Oro said, “but when I do freestyle — words just come out with fluidity.”

In freestyle rap competition, artists rap off-the-cuff, usually about the opponent. It’s almost always disrespectful and in-your-face. One’s freestyle rap prowess — usually judged by the reaction of the circle of listeners called a “cypher,” or selected judges — is based on style, delivery, articulation, and wittiness.

“Oro, assuming we were battlin’ — spit a rhyme real quick,” I requested.

Many things come to mind when dissin’ another rap

Like no harm from this wack rappers spitting their crap

And false advertisement homes this is a fact

Zedukes is no stranger to the bilingual freestyle rap game. In 1984, he rapped on Hollywood Boulevard in between his class sessions at Woodbury University.

I found the “Axel F” sampled song on YouTube, and at about the 4:34 mark, I heard the then 24-year-old Zedukes start his flow with: “La raza aquí — la raza alla,” before rapping about his amiga, Sheila E; then segwaying into rapping-and-speaking in the Italian and French languages as the song fades.

“…. I can’t forget the first trilingual rapper, my bro, Z-BOI,” Big Chris commented underneath the video. “I had a lot of fun doing this [track, also] with MC FOSTY and DJ FLASH — two of the original bro[s] from The Rapper Rapp Group.”

“That’s me making history, without knowing it,” Zedukes said.

On October 11, the cost to battle at Ghetto Dreams is about $5 USD, and the cyphers and registration begin at 3 pm. General admission for spectators cost about $15 USD.

Just silly. Let’s not glorify a career choice in which 1/1000 actually make it to be somewhat successful. Kids focus on school, not this quasi ghetto pastime.