Sara Jacobs money edges others out of race 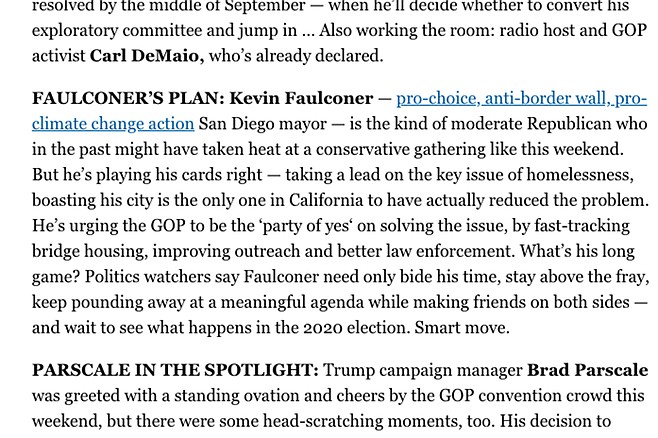 The auditors are still out

San Diego mayor Kevin Faulconer, a veteran of the public relations business, put a few good ones over on out-of-town media members covering the California Republican Party’s annual convention in Indian Wells. Per a September 9 write-up in Politico’s California Playbook, Faulconer went around the convention hall “boasting his city is the only one in California to have actually reduced” the homeless problem. Locals have said the numbers he cited are suspect, but there was no mention of that. Added Politico: What’s his long game? Politics watchers say Faulconer need only bide his time, stay above the fray, keep pounding away at a meaningful agenda while making friends on both sides — and wait to see what happens in the 2020 election. Smart move.” 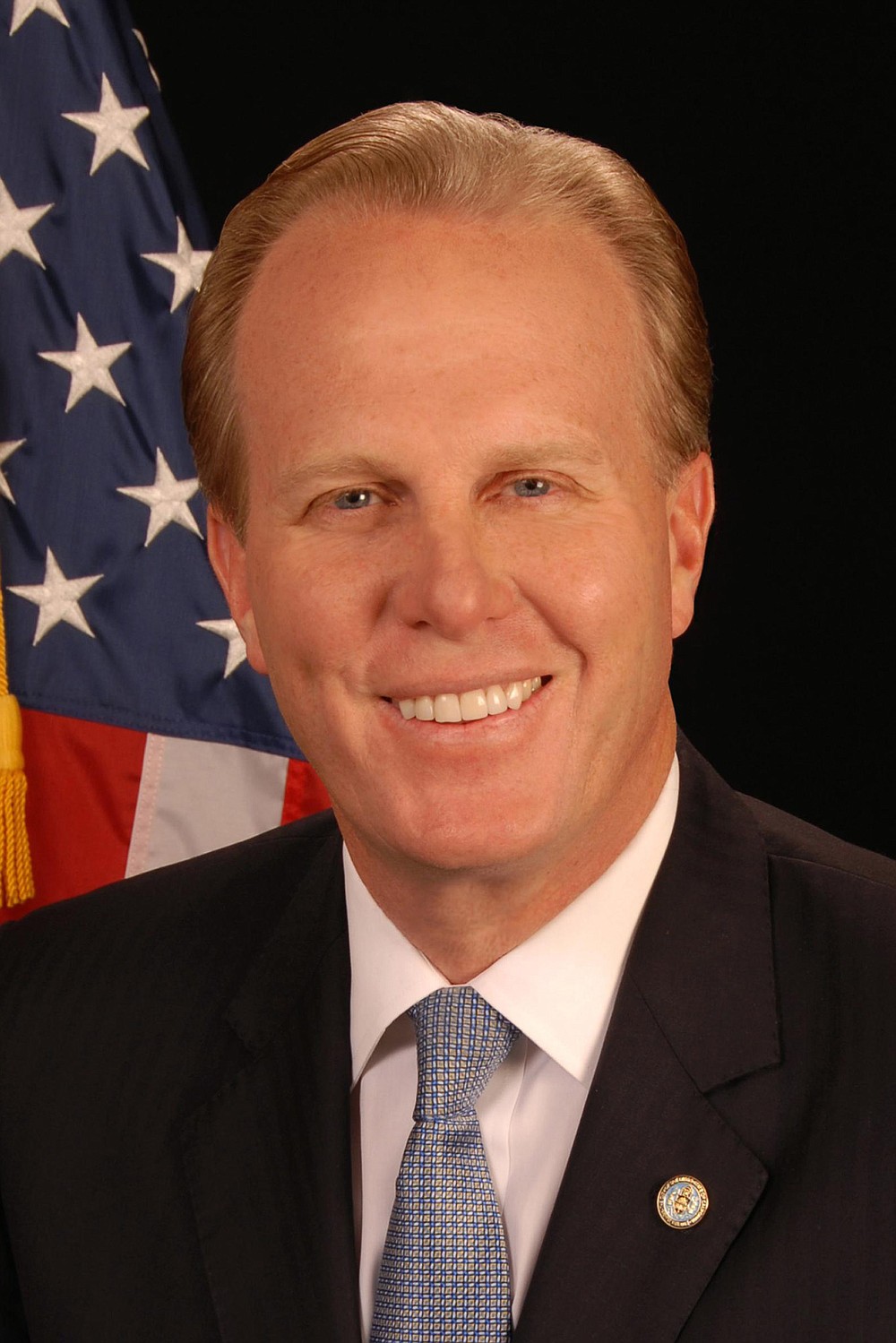 Against all visible evidence, Mayor Kevin Faulconer has been boasting that San Diego reduced the severity of its homeless problem.

Back at city hall, despite good words from Politico, Faulconer’s list of uncompleted work continues to grow. A replacement for ex-city auditor Eduardo Luna has yet to be installed, two months after the city audit committee’s July10 failure to consider Faulconer’s pick of DeeDee Alari, a deputy director in the city treasurer’s Office. “The Mayor’s Office agrees with the decision of the audit committee chair to hold off on consideration until each member of the audit committee has an opportunity to meet with the selected candidate,” said a statement by Christina Chadwick cited by the Union-Tribune. 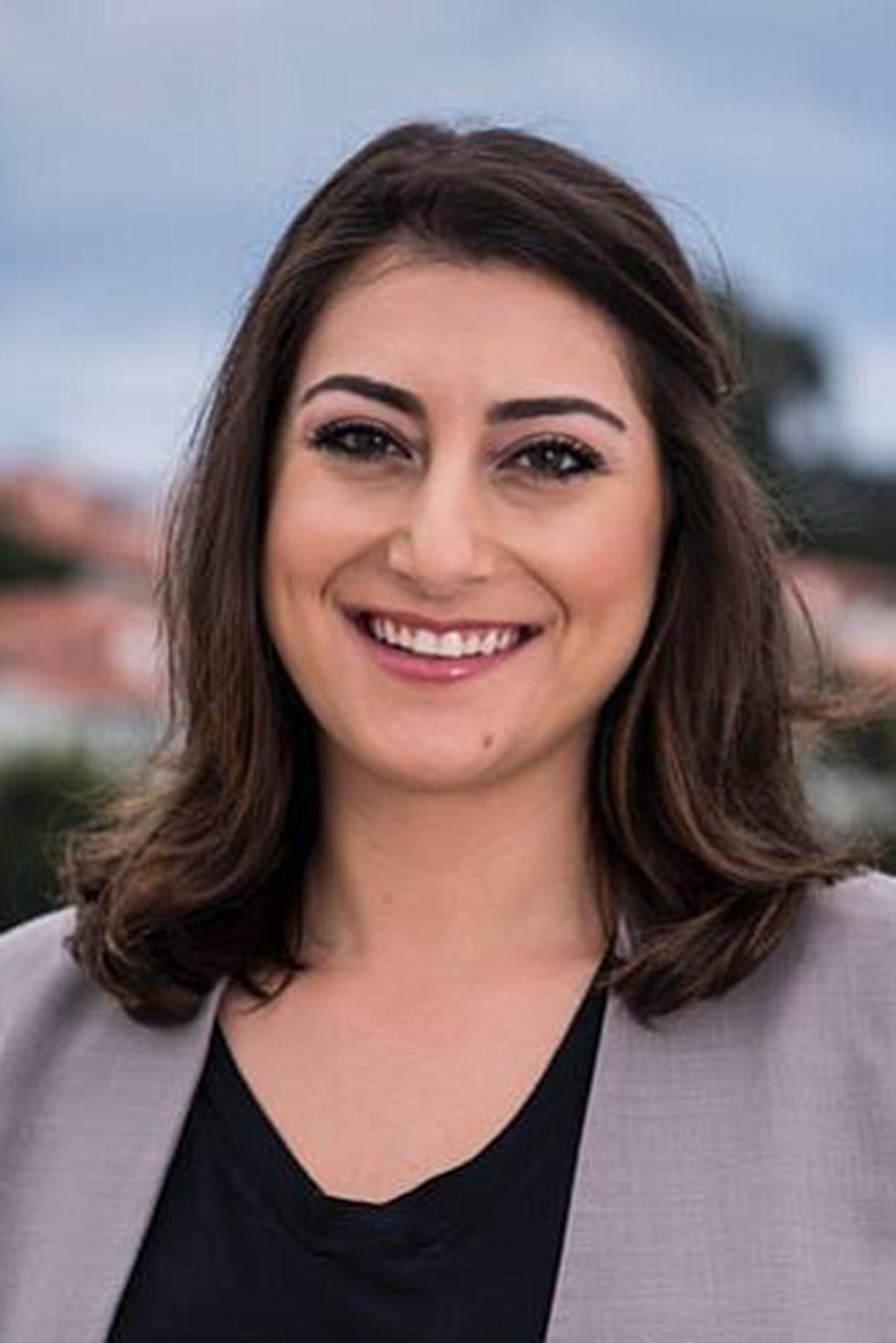 Faulconer has since resumed advertising for new chief auditor candidates, as well as for two additional audit position vacancies that would usually be filled by a seated full-time auditor. The slots of Performance Auditor and Principal Performance Auditor, both non-civil service gigs, are open, with no deadline for applying, according to the city’s jobs website, causing insiders to worry about a hike in bureaucratic and mayoral malfeasance during an unpredictably long interlude.

During Luna’s 10-year reign as chief auditor, Faulconer’s administration, and that of his mentor, GOP ex-mayor Jerry Sanders took an avalanche of hits, including allegations regarding abuses of planning processes, SDG&E billing for ghost streetlights, and flawed graffiti control. Meanwhile, Luna, now chief auditor of Beverly Hills, has come up with a $100 contribution to Assembly Democrat Todd Gloria’s 2020 bid to replace the termed-out Faulconer as San Diego mayor.

Democrat Sara Jacobs, running to replace Susan Davis in California’s 53rd Congressional District, has yet to file the required disclosure of her assets. But her statement from her failed 2018 run in the 49th District reveals an impressive holding of Qualcomm stock, between $5 million and $25 million, yielding between $250,000 and $500,000 in annual dividends, per the December 30, 1917 document. San Diego’s cell phone chipmaking giant was co-founded by her grandfather, Irwin Jacobs, the main financial backer of his granddaughter’s political career, with more than $2.5 million already invested. The candidate’s other million-dollar-plus assets include investment property in Washington, D.C. worth as much as $5 million, and investment property in New York of the same value. The Washington real estate has been bringing in between $100,101 and $1 million annually. New York income ranges between $5001 and $15,000. Other whale-sized holdings include between $1 million and $5 million in Beldore Capital Fund, LLC, a pooled investment fund run by Boston’s Eaton Vance, and the same range in Clearfork Capital Fund, also managed by Eaton Vance. Her smaller investments include between $100,000 and $250,000 in Alphabet Inc., the parent of Google, now being investigated for “potential monopolistic behavior” by the attorneys general of all 50 states.

San Diego needs a non-partisan inspector general. San Diego is and always has been corrupt. It is too big to manage effectively or to address the needs of the citizens. In San Diego it is the money that talks. Faulconer like those before him is just another empty suit.