Fagara: Sisters doing it for themselves

A film told from a feminist point-of-view by three smart, strong, and self-reliant actresses 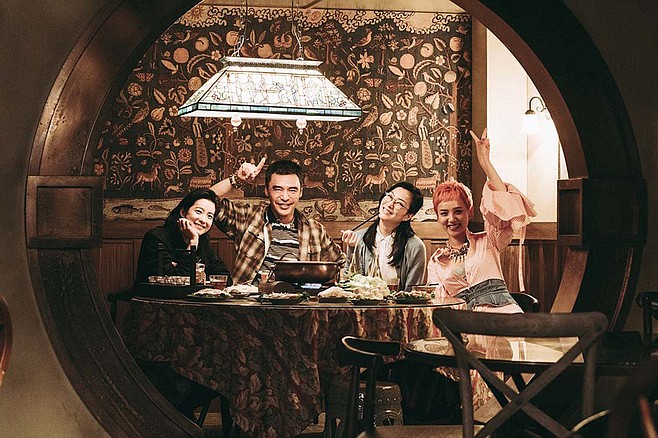 Occupational Hazard #29, aka The Installment Plan: when a critic oversteps a self-imposed two-film-a-day limit, conks out halfway through a picture, and finishes watching it the next morning. The rating for Heiward Mak’s Fagara was holding steady at four stars before Morpheus’ embrace; the arrival of the cold light of day (and a few glaring contrivances) sliced it in half.

From inside a modernistic Chinese dragon, Ha Leung (Kenny Bee) pauses to greet viewers with a “come aboard” wave of the hand. The corresponding cutway is withheld until picture’s end, but for the moment, the introductory shot works its magic. Ha’s estranged daughter Acacia (Sammi Cheng) hammers out a living as a travel agent, her day spent working the phone, meaning everything from fending off telemarketers to dealing with a client needing assurance that his wife will not catch wind of accommodations made for his secretary. When fate rings up, the volume of calls is such that it takes a moment for her to realize that it’s not a salesman pitching cemetery plots, but a hospital asking about her father’s next of kin.

Seated in the hospital cafeteria is Acacia’s future love interest (Richie Jen), the only doctor in the world capable of picking Ha’s kid out of a crowd based on the tsunami of hot sauce father and daughter both use to submerge a main course. See, Acacia picked up a taste for spicy food at the popular hotpot restaurant dad owned and operated. (Sparing you the Googling: a hotpot is a steamboat method of Chinese cooking that begins with a simmering pot of soup stock at the dining table.) And Fagara is the titular szechuan pepper used in Ha’s signature dish. But things are about to get a whole lot hotter.

The decision whether or not to make the leap from tuckered travel agent to a slightly more exhausting career in restaurant management was not the only jolt to Acacia’s system. Ha’s sudden passing came with a pair of aftershocks in the form of two younger sisters, both from different mothers, the existence of whom didn’t accompany Ha to the silence of the grave. (Acacia learns of them from a cell phone left in the care of a devoted busboy.) Ambisexual middle child Branch (Megan Lai) is a high-ranking professional pool player, carrying her own share of parental strife thanks to a domineering mother. Unlike the greased-back cue-handler, baby sis Cherry (Li Xiaofeng) is known for her trademark incandescent crimson coiffure. (The soignée sib hosts a popular video fashion blog.) Her major familial roadblock is a meddlesome grandmother eager to marry her off.

The reflection of the trio, watching as Ha is being prepped for cremation, tells the story. Positioned in the middle, Acacia seems more interested in observing her siblings’ reactions than she is in exposing any real emotions of her own. If only she were able to follow the advice given by a friend: forget about what Ha didn’t tell his daughters, and instead focus on why he withheld the information.

An offer is made to buy the eatery, and with it go the rights to control the logo Dad designed and worked so hard to imprint. Golly gee, it sure would be swell if his daughters found a way to keep his dream alive. Acacia’s refusal to sell was the last thing I remember before responding to the 6:40 am wake up call of my neighbor’s yelping baby Doberman.

Make no mistake, this is a film told from a feminist point-of-view by three smart, strong, and self-reliant actresses who bring plausibility to their characters. If their instantaneous bonding felt a little pat, it was nothing compared to the viewer’s time spent driving around with Acacia and her father-figure of a boyfriend (Andy Lau). The feelings exchanged therein are so negligible as to heap added remorse on a character who cracks maybe three smiles over a 120-minute running time. After a summer spent enduring comic book pictures by committee and other assorted variations on uninterestingness, one would think that an understated, effects-free melodrama would be the tonic for what ails me. But it’s one thing when nothing remarkable happens, another when it plays out in an unremarkable fashion.

Documetary to be screened in conjuction with SDMA exhibit

The San Diego Museum of Art will hold a film screening in conjunction with the exhibition Black Life: Images of Resistance and Resilience in Southern California. Frank Dawson and Abby Ginzberg’s documentary Agents of Change recognizes, in exhaustively researched detail, an uncompromising moment of upheaval in American history.

The movement began around the time Muhammed Ali refused to participate in a war against an enemy that wasn’t his. It was Stokley Carmichael who placed the term “Black Power” in popular usage. Before it was over, the first all-black student union had been formed in a predominantly white college. The image of black students, rifles raised and emerging victoriously from the takeover of the student union at Cornell University, packs as powerful a place in today’s as it did in April 1969.

It may not be much of a selling point in this day and age, but it’s been a long time since we’ve seen a film that placed this much emphasis on the importance of getting an education. The San Diego African American Fine Arts Museum is co-sponsoring the event. Executive Director Gaidi Finnie will be on hand for a post-show Q&A with filmmaker Frank Dawson. The screening takes place on September 13th at 8 pm.