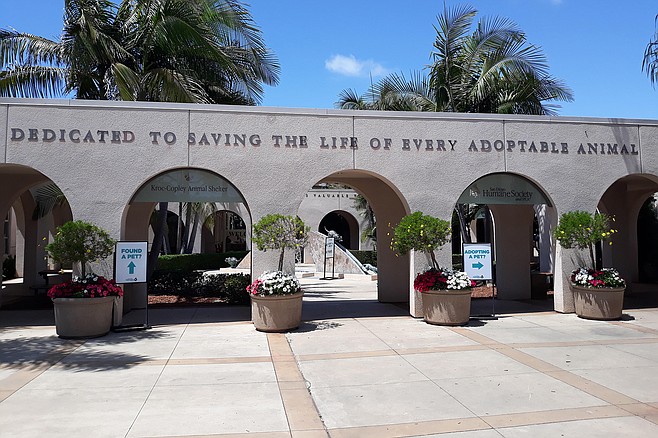 Fourteen years ago Rancho Bernardo resident Robert D. Fausner had four pet cockatiels. He kept them in his one-bedroom apartment cage-free and by January of this year they had reproduced into 83 free-flying birds, plus one newly hatched chick.

Living in unsanitary conditions and at conflict with his neighbors, he called the San Diego Humane Society on January 22 to ask for help. He says he acknowledged the situation was unsustainable and agreed to put 80 cockatiels up for adoption, all except the oldest four he says he has a deep relationship with. 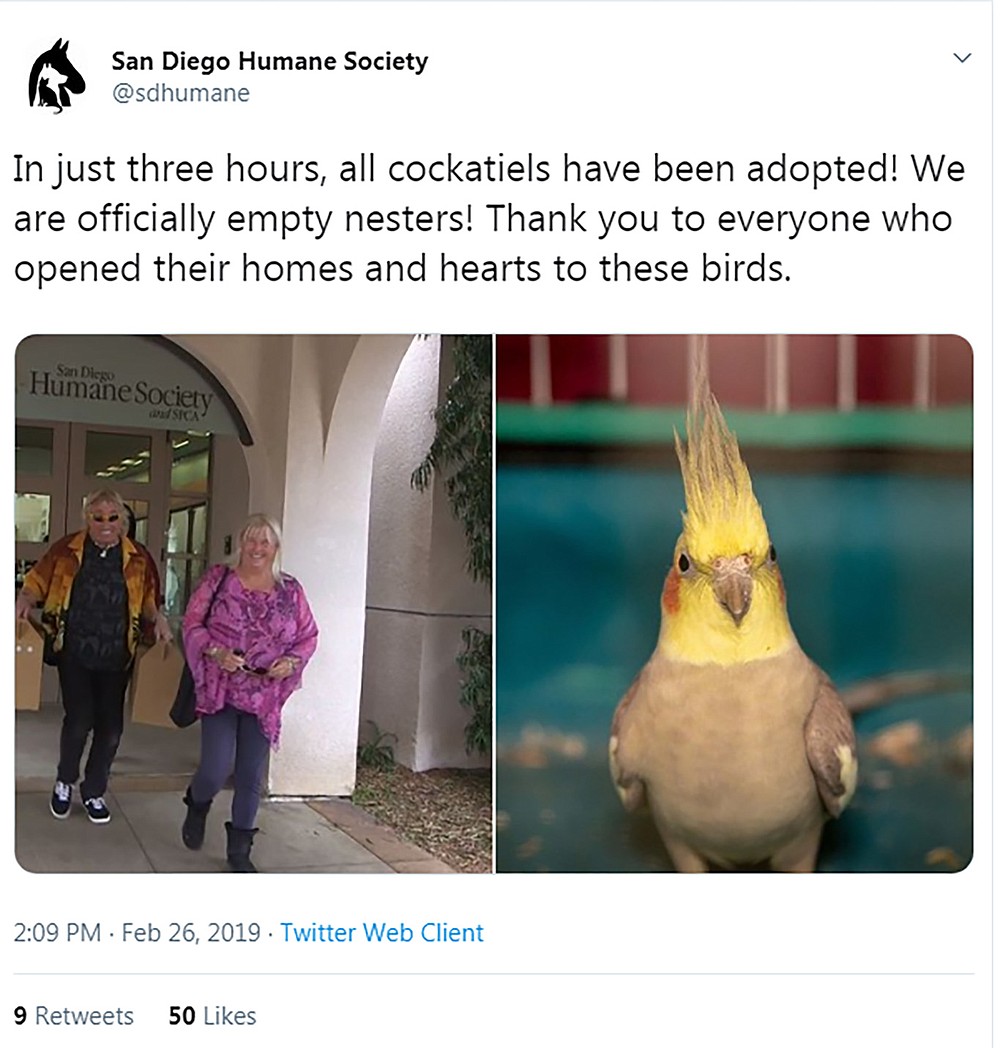 On January 23 (with cameras rolling) Humane Law Enforcement officers packed multiple trucks with bird boxes. They arrived at Avenida de los Lobos, around the corner from the major intersection of Bernardo Center Drive and Camino del Norte. A Humane Society YouTube video shows officers wrap their boots in plastic, put on gloves and protective masks, and walk up a stairway to Fausner’s second floor apartment. One by one they came down with birds in boxes. They seized all 84.

Each bird was examined by Dr. Enyart, a veterinarian standing by in one of the trucks. In the video published by the Humane Society he said the birds’ pectoral muscles were a little thin and their feathers a little dry. But in a Fox 5 news video Enyart added he was surprised by how healthy the birds were and had expected them to be worse off. “Other than being a little on the thin side they looked great,” he said. 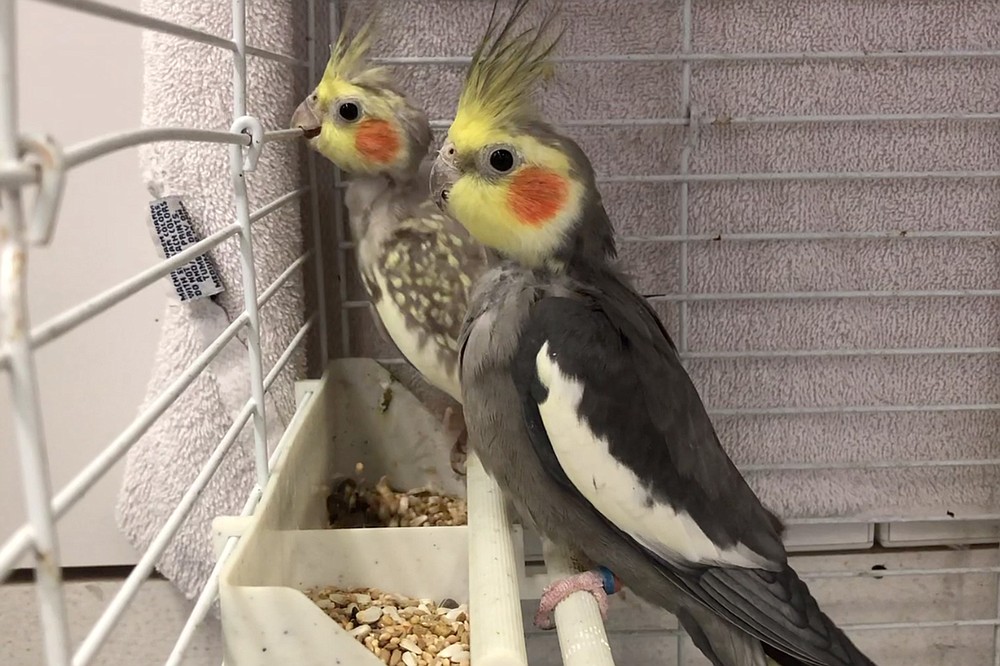 In her statement to news crews Humane Law Enforcement Sgt. Laurel Monreal described a residence covered in cockatiel feces; on the bed, walls, floors, clothing, and windows. Monreal said Fausner was a “good man” who “had a few birds and they continued to breed and... it gets out of hand quickly... I’m sure he did not intend to get into this situation.”

Yet the 65-year-old was arrested by the San Diego Police Department. (Their media relations team did not respond to my questions.) Fausner says he was admitted to the San Diego County Psychiatric Hospital “for an unexpected three-day psychiatric hold.” He says he was released a day early and was told, “You don’t belong here.” 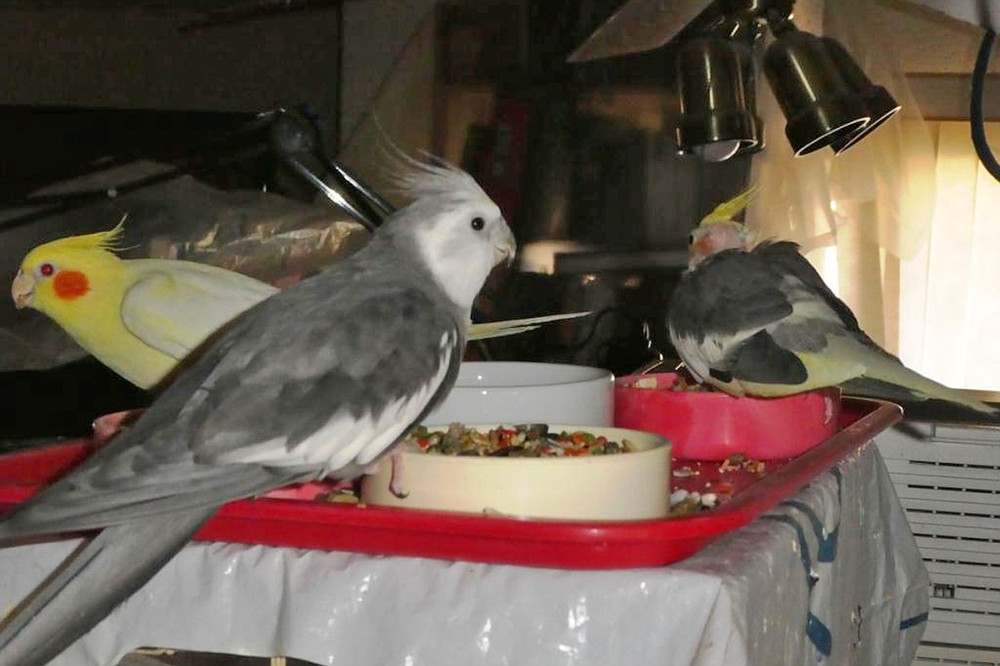 On April 23 Humane Law Enforcement recommended the city attorney file misdemeanor animal cruelty charges against Fausner. On June 20 he was charged with animal abuse and neglect, and with failure to care for an animal, both as misdemeanors. If convicted he faces sentences of up to one year in jail and six months in jail, respectively. Prosecuting Fausner is Deputy City Attorney Jessica Castany, who volunteered for three years at San Gabriel Valley Humane Society near Los Angeles, according to her LinkedIn profile. On July 23 Fausner pleaded not guilty to both charges and demanded a trial by jury. He says he will stand his ground and maintain his plea.

As to the bird seizure Humane Society News Center manager Nina Thompson says the owner of a seized pet gets one hearing and one appeal within Humane Law Enforcement. If the seizure is upheld they can appeal to the San Diego Superior Court within ten days of the society’s final decision. Fausner did not. “I willingly surrendered the cockatiels to the Humane Society on January 22, a full day before their seizure operation, and on February 15 I relinquished ownership of [80 of them] for adoption,” says Fausner.

Thompson says the 80 cockatiels Fausner relinquished “were medically cleared by our veterinarians and adopted into 39 homes on February 26.” A tweet from the society stated they were adopted out within three hours. Twitter users questioned how well people were vetted in such a short time.

Thompson says, “[Our] typical conversational adoption counseling practices were in place which includes asking adopters their experience level with cockatiels and birds. We asked questions regarding the bird’s prospective housing in their new home and answered any questions the guests had. All adopters received cockatiel care educational materials with their adoption.”

Fausner says he told Humane Law Enforcement Capt. Ganley, “The four eldest cockatiels being held hostage need to come home.” He says Ganley laughed at him. “[The Humane Society’s] mantra ‘Inspire Compassion,’ is empty... Their only interest is fabricating publicity.”

Fausner says he is worried his cockatiels think he abandoned them, and it’s breaking his heart. He says he has not been allowed to see the unrelinquished four since February 15 and didn’t know if they were dead or alive, until he got bad news over the summer. His gray cockatiel “Papa Neatzyo” died in Humane Society custody. Fausner says, “Neatzyo was a very gentle, loving cockatiel. I can only imagine the trauma he felt being viciously torn from his home and flock and the stress he experienced being locked up in a small cage. It broke my heart hearing he was gone.”

The society didn’t give Fausner a cause of death. Thompson declined to comment about it. She says the remaining cockatiels cannot be visited by anyone, as they are in protective custody pending the outcome of the charges against Fausner.

According to their 2017-18 annual report the non-profit Humane Society raked in $29.8 million in income and held $59.3 million in net assets. Of the $29.4 million in expenses, $4.9 million was spent on Humane Law Enforcement. Thompson says, “Humane Officers can exercise the powers of a peace officer while investigating animal-related crimes, and our team responds to nearly 2000 reports of animal cruelty every year. [They] respond to calls regarding loose animals, injured animals, animal bites, and rescuing animals during disasters.”

The society has campuses in San Diego, Oceanside, and Escondido. Animal welfare services are provided to the city of San Diego, nine North County cities, Imperial Beach and Santee. (Chula Vista provides animal services to National City, Lemon Grove, and their own residents. The El Cajon animal shelter is separate from the Humane Society and shares its services with La Mesa. The county Department of Animal Services deals with all unincorporated areas of the county.) The Humane Society adopted out 6864 cats, 4,011 dogs, and 867 small animals and horses in the last year reported.

Fausner believes justice is not the motive behind the cockatiel rescue narrative the society is presenting or the charges that were filed against him. “I believe the media circus was... a fabricated publicity stunt to promote their seizure as a benevolent rescue of my cockatiels from their implied evil owner,” he says.

He’s not the first pet owner to feel unjustly prosecuted. In 2015 a California appellate court reversed a conviction of five counts of misdemeanor animal cruelty against Bonsall resident Karen Adams, who over time had taken in over 100 stray or unwanted dogs to take care of. According to testimony cited in the court order, many of the dogs were already sick when they came to live with her. The San Diego Humane Society impounded eight sick dogs they found living in unsanitary conditions. One of them died of pneumonia in their custody three months later. A veterinarian testified it was likely the dog died from exposure to germs at the shelter, not from the condition he was in when he was impounded. Adams was convicted in San Diego Superior Court but the appellate court found there was insufficient evidence for an animal abuse or neglect conviction. The only conviction that stood was operating a kennel without a license.

Animals are subject to legal action too. In 2016 Escondido resident Melinda Apple’s dog Ziggy was declared a “dangerous dog” by the Humane Society. Ziggy had bitten the same woman on two different occasions. On January 6, 2017 the San Diego County Department of Animal Services upheld the decision in an administrative hearing. According to the ruling, “A dangerous dog may be abated by one of two means, either by imposition of conditions and restrictions upon the owner or by destruction of the animal.” Apple appealed to the San Diego Superior Court.

On October 2, 2017 Judge Earl H. Mass III reversed the “dangerous dog” designation. He said Ziggy had an “overwhelming record of good behavior” and noted even Humane Society staff admitted he was so well-behaved in their custody he was a “kennel favorite.” Maas added there had been no investigation of the behavior of the only person Ziggy ever bit at the times the bites occurred. (A restraining order the woman filed against Apple was denied.) The judge found, “Ziggy did not receive a fair trial.”

On June 24, District Attorney Summer Stephan held a news conference with Humane Society President Gary Weitzman. It was the one-year anniversary of the formation of the DA’s Animal Cruelty Unit, placed within the Family Protection Division. Stephan explained, “We saw a strong connection between those who abuse animals and those who abuse intimate partners, elders, and children.” According to the DA press release, “Forty-three percent of school shooters have animal abuse in their background.”

The Animal Cruelty Unit has prosecuted 53 cases of animal abuse, “of which 17 had a nexus to family violence.”

A very sad story. I'm not sure what's going on here, but I wish Mr. Fausner and the birds well.

What a disgusting action. He would have been better off releasing them to the wild. So much for trusting the Humane Society.