Three strikes before you kill animal 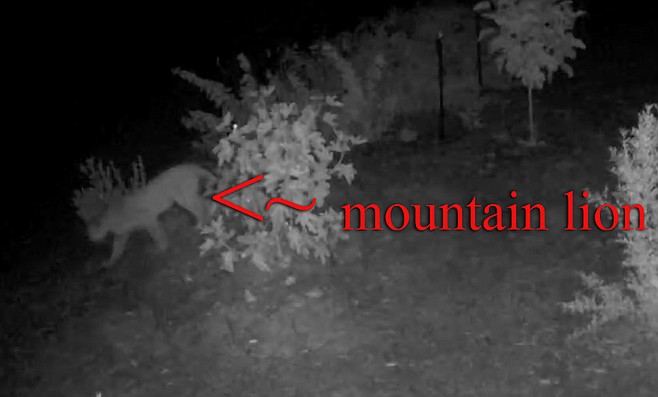 Around midnight, September 4, Joe Avila was alerted via his phone of a mountain lion lurking within their Valley Center property. 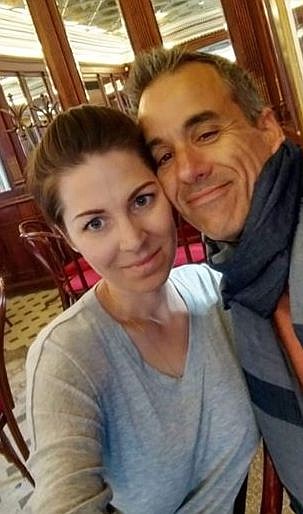 Joe and Kikki Avila: “We were surprised by the negative reactions.”

“We added the Arlo Pro cameras in the orchard to see what was eating our fruit trees,” Joe said to me September 8. “This was the first mountain lion we’ve caught on camera — there have probably been more, but we’ve only had the cameras installed a few weeks ago. We’ve seen evidence of large cats on the property because of the large paw prints we’ve seen, and there are deer, bobcats, and coyotes that come through the property; deer are almost a daily occurrence.”

Joe’s wife, Kikki, a 34-year-old entrepreneur and philanthropist, posted the cat’s video footage on Facebook. “We were surprised by the negative reactions,” Joe said. “Mountain lions are a protected species, so we made a reasonable assumption that someone isn’t going to go out of their way to hunt these beautiful creatures — especially in a gated community.”

“Kikki, by alerting people it creates people to want to kill it,” one neighbor posted. “That’s why I keep my mouth shut for the last 18 years with mine (mountain lion sightings).” 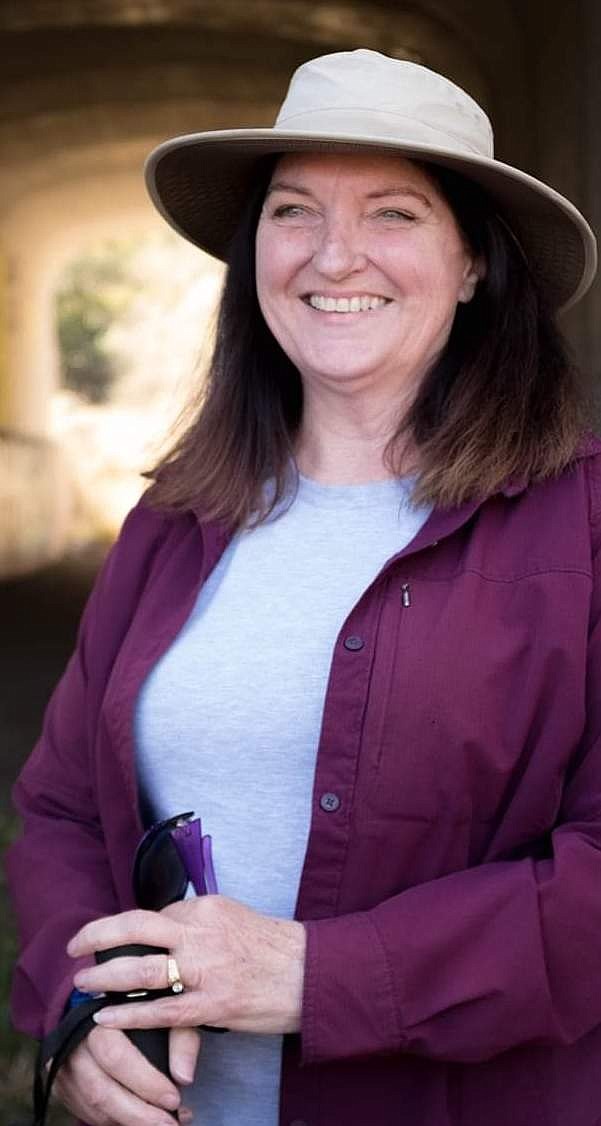 “Wow,” Kikki responded, “that’s messed up. For our neighborhood, we alert others so that they are more protective of their cats and dogs — as well as [them and their children] not going out at night. We all live on large properties and forget that we have these animals just strolling through.”

About 14 years ago, MountainLion.org reported the presence of “90 mountain lions” in San Diego County — and their study of the ones located in the North Escondido and Valley Center areas and the then-recently constructed wildlife tunnels.

“…. four mountain lions were killed by motorists between 1997 and 2002 near Valley Center Rd.,” said Park Ranger Duane Boney. “The deaths occurred in a tight area close to Stanley Peak, on the west side of the road. There might not be more moving through, but maybe fewer will be killed now (2005) that there are tunnels for them to use.”

Fast forward to 2019 and some experts are still estimating about “90 mountain lions” in the county.

The Avilas live close to three wildlife tunnels underneath Valley Center Road. The tunnels are monitored via video and accompanying computer data analysis. There are photos and data charts of the animals (in code) that passed through the tunnels — and were manually logged in. 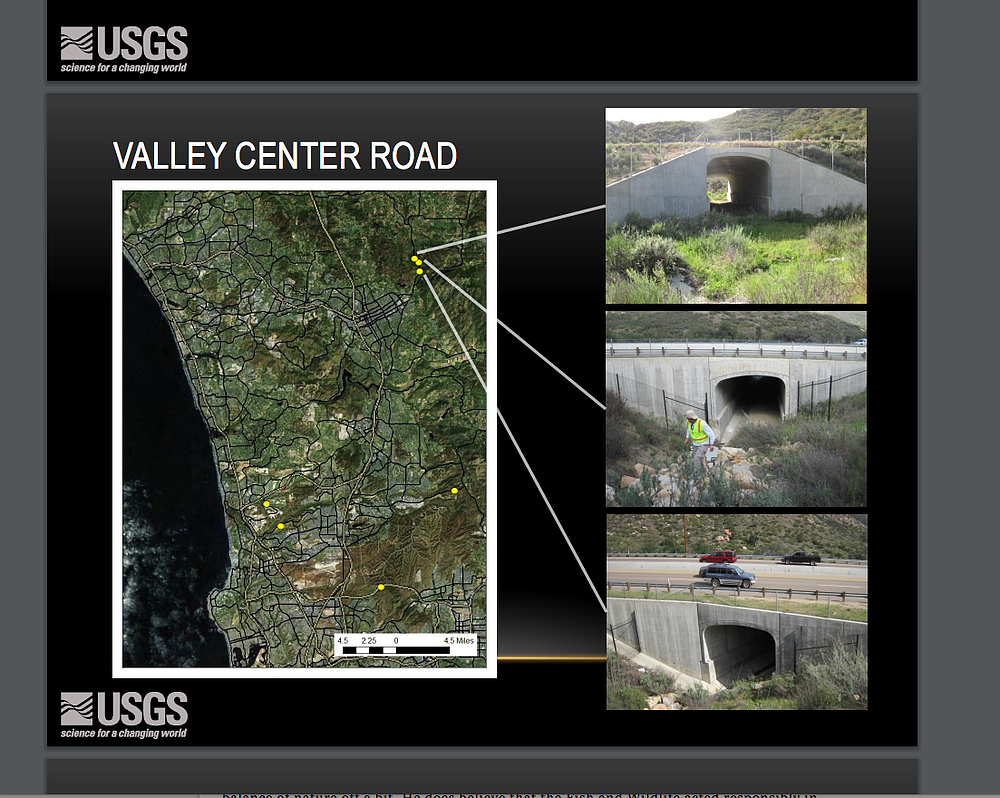 "Exclusionary fencing has been installed to encourage the animals to use the tunnels."

I reached out to Denise Harter, for assistance in the decoding of the charts. She said, “those are taxonomic abbreviations, ‘HOSA’ is homo sapiens. I don’t believe mountain lions (or its cougar or puma aliases) were detected on any but one camera.”

Harter, from Escondido, does survey work in the monitored tunnels underneath Valley Center Road — as she leads the Daley Ranch Tracking Team. Daley Ranch sits in the middle of Escondido and Valley Center which are about nine miles apart.

“These tunnels are behind locked gates,” Harter said September 8, “and exclusionary fencing has been installed to encourage the animals to use the tunnels instead of crossing the road.”

“We have seen animals walking on the roadside, as well as dead animals,” Joe said. “We are vegan so we are absolutely against the killing of animals whenever possible, especially for pleasure, such as hunting.”

Harter agrees with the Avilas, in this case. “Remember that merely seeing a mountain lion is not a justification for taking any lethal measures,” she responded underneath the Facebook video. “Even if a mountain lion takes livestock, there is a new three strikes policy — as I understand it, before a depredation permit is issued, other steps to solve the problem have to be taken, such as hazing the animal and securing the livestock in a more protected enclosure. Only if these don’t work will a permit be issued.”

“We invaded their land,” Kikki said, “and we have no problem with them on our property. We just don’t want them eating our orchard so we plan to put in a motion detector sprinkler just to keep them out from one area.”

The couple and other life-long residents here are not sure how their soon-to-be neighbors of the newly developed 632 homes spread throughout 186 acres — will react to the mountain lions.

Joe is a 49-year-old applications engineer. “Kikki is against the development because she believes we are over-developed and continue to drive demand as a society,” he said. “She wants us, as the human race, to maintain the natural habitat …. the reason we moved to the outskirts, was to achieve this as best as we could here in San Diego. While I agree with her on the nature aspect, I understand that there are external pressures such as lack of housing that requires society to do its best to relieve those pressures.”

Harter’s been a certified tracker since 2007, earning her level three certification in 2015 through CyberTracker in South Africa. “The silent threat to large animals, but especially mountain lions, is the reduction in genetic diversity due to populations being isolated by freeways,” she says. “These crossings and underpasses also keep animals from moving through neighborhoods, which is good for all concerned – people, animals, and pets.”

“When I post pictures of mountain lion tracks, I usually obscure the location data, unless it’s in a very remote place, like Borrego,” she says. “I don’t want to make anyone unnecessarily fearful because when people react out of fear, lions die. On the other hand, it never hurts to be reminded that it’s your job to take care of your animals, whether it’s livestock or pets!”

In June, the Reader published a story about a four-year-old boy that was attacked by a mountain lion in Los Peñasquitos Canyon Preserve, on Memorial Day; the child reportedly was transported to Rady Children’s Hospital with non-life-threatening injuries. The mountain lion was killed by California Department of Fish and Wildlife officers shortly after.

“We are moving into a new paradigm,” Harter says, “where wildlife and humans will live in close proximity, if not in outright overlapping areas. Tolerance begins with education."

I understand both sides of the argument. The call of the wild, mountain lions were here first. They're in their natural habitat. They're a threat to pets, small children, etc. Stay as far away as possible. Don't kill my pet or child. Where do you draw the line?

The lions were here first and likely can’t afford the ridiculous housing prices in the county, therefore (like many humans) have no choice but to live in the bushes. So please leave them alone arrogant humans.

I find the assumption of some kind of moral superiority by people using phrases like, "So please leave them alone arrogant humans." tiresome and predictable from the wannabe self-appointed protectors of the environment. The very large majority of us are conservation-minded and respectful our local natural resources, including the large predators, like mountain lions and white sharks. We just want common sense applied to protecting them and protecting ourselves where we share space with them. You don't have to think you are special and entitled to preach at the rest of us just because you care about our wildlife.

It’s my opinion. I couldn’t care less what you think of it.