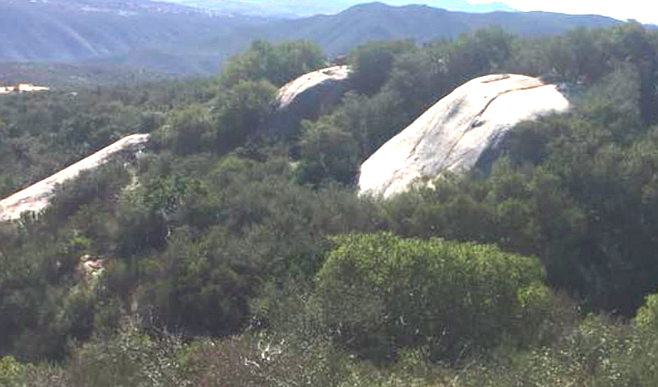 After nearly three years of planning, paying and preparing to build a trail on Orosco Ridge, the San Diego Mountain Biking Association was stunned to learn their work with the U.S. Forest Service was cast aside via a letter posted on social media announcing the project’s suspension.

“We started this because they came to us and said this trail would be one of the (Palomar) district’s top three priority projects,” says Susie Murphy, executive director of the mountain biking group. “We raised $70,000 and spent $50,000 of it, and now they’re saying they don’t have the staff time or budget.”

The letter – followed by a more detailed explanation – came after the forest service’s National Environmental Policy Act evaluation turned up comments that raised questions about how appropriate the plan was, says Olivia Walker, the local Forest Service public affairs officer.

“The area may not be suitable and safe,” she says. “The comments raised questions we hadn’t thought of.”

For example, the ridge had been a shooting range and hunting site, and has heavy metals contamination that includes lead, copper and zinc. Clean up may cost millions of dollars, Walker says. And there are questions about an increase in people using the county road to get there when the road is appropriate only for light traffic.

“With the comments from the [forest service] review, the scope of work changed and there are an increasing number of problems,” Walker added. After the document went out for comment, agencies including the California Department of Fish and Wildlife, the county, the U.S. Fish and Wildlife, the Tribal Council and CalFire all weighed in, concerned that they have stakes in the project that they didn’t know about until the draft NEPA report went out.

Orosco Ridge is located in Pamo Valley, north of Ramona, part of 20,000 acres of Forest Service land in the Cleveland National Forest. The county’s Pamo Road is the only official way to the ridge – there are fire roads and truck trails. A recently completed hiking trail was featured in the Reader in January.

Both Murphy and Walker say that a staffing change in the Palomar District played a big role. The project’s Forest Service champion moved to another district, and most of the institutional knowledge and support went with him. The letter on social media came from his successor.

But the association was baffled by the sudden change in the district’s communications. They’re working on projects on other federal land, including the Forest Service’s Descanso district, without problems. “The Mount Laguna trail restoration project is going great,” Murphy says. “The reason an agency partners with a community organization like ours is to try to pick up budget slack while providing public access.”

Once they were invited in the fall of 2016, the mountain biking association really liked the idea and developed a plan for 20 miles of trail. They hoped to eventually build 80 miles of trail – and that alarmed some people who read the NEPA documents.

Of the 607 comment letters the forest service received, 551 were form letters from mountain biking association members and supporters. The remaining 55 raised issues including questions about environmental issues, the clustering of trails and the condition of the roads, the impact of increased parking and human activity and the propriety of the relationship between the forest service and the association. The cyclists raised money from members and won a $15,000 grant from REI, Murphy says. They used the money for detailed project area mapping ($15,000), hiring a trail design outfit for $21,000, and paying about $9,000 for Forest Service staff time to work on the NEPA assessment.

The forest service has offered to refund the application money, Murphy says. If the mountain biking association accepts the refund, the group will hold onto it with the hope of paying for the documents if the plan is renewed.

“We paid for deliverables that we still have and can still use,” Murphy says. “We don’t see this as wasted money.” Murphy and Walker confirm that the plan isn’t just plain dead. Cyclists plan to meet with Forest Service staff in October to see what they can hammer out.

So, the departure of one bureaucrat in the Forest Service, and this whole thing goes on hold indefinitely. Until every piece of the puzzle is in place, there ain't gonna be a trail. No wonder it takes so long to get anything done around here. We are told that federal agencies do everything by the book and that the personalities don't make any difference. Yet that is just what happened here.

A well-designed and mapped trail in that area would be an asset. Too many of the national forest trails were developed (if you can call it that) prior to mountain bikes. And now many suffer from the effects of bikes. Steep or very rocky stretches of trail cause erosion from the tires slipping either on the way up or on the way down. Take out the steep stuff and you now have a trail that serves both the bikes and the hikers.

If I were a mountain bike rider, I'm not, I'd be ready to just give up. Next thing you know, unofficial and poorly designed trails will begin to appear in that area, made by frustrated riders.

A bureaucrat is a nameless weasel who is given power and uses it to show everyone how important he is. (yes, he a most women would not act like a moron)