“We’ve done everything we can" 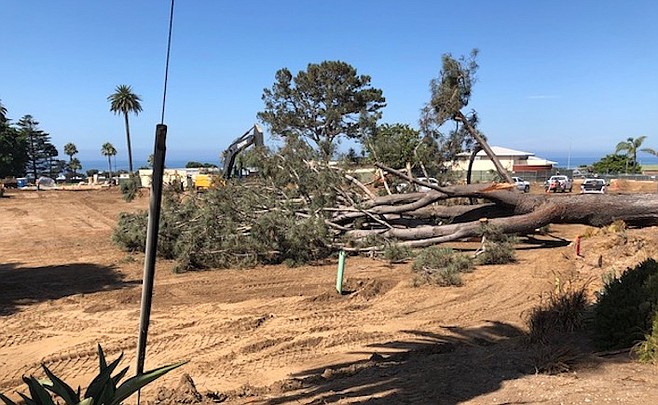 “It wasn’t supposed to come down,” say Cardiff by the Sea activist opposing the August 26 removal of a 70-year-old, 65-foot Torrey Pine tree at Cardiff Elementary School. The tree was planted by school children when the school opened in 1950.

Over the summer most of the 70-year-old classrooms, playgrounds, and the school’s auditorium were torn down, all part of Proposition GG, a 2016 voter approved $22 million bond measure to rebuild the aging campus. 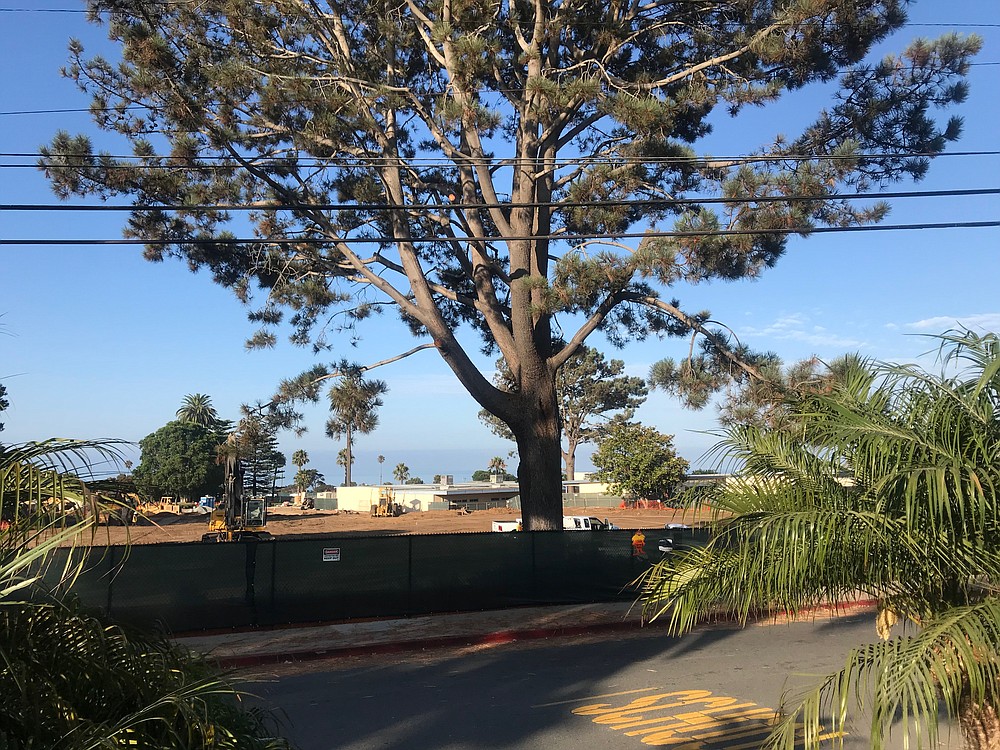 Announced on Facebook and Nextdoor.com, a small group of protesters showed up at 7:30 a.m. across the street from the tree, near the corner of Montgomery Avenue and Mozart Avenue, the school’s northeast corner.

The protesters were part of a larger group known as Save the Park and Build A School. The organization has been a thorn in the side of the school district officials for the last two years, attempting to block the wholesale demolition of the school, and plans of creating a larger footprint on areas that are now parkland.

Eleanor Musik, a director with the organization, says, “They knew the tree was there. They could have designed around it.” Although the district has already cut down 25 mature trees on the property, and once construction is complete, will be replacing more trees than were cut, the construction plan did not call for the felling of the heritage Torrey Pine. 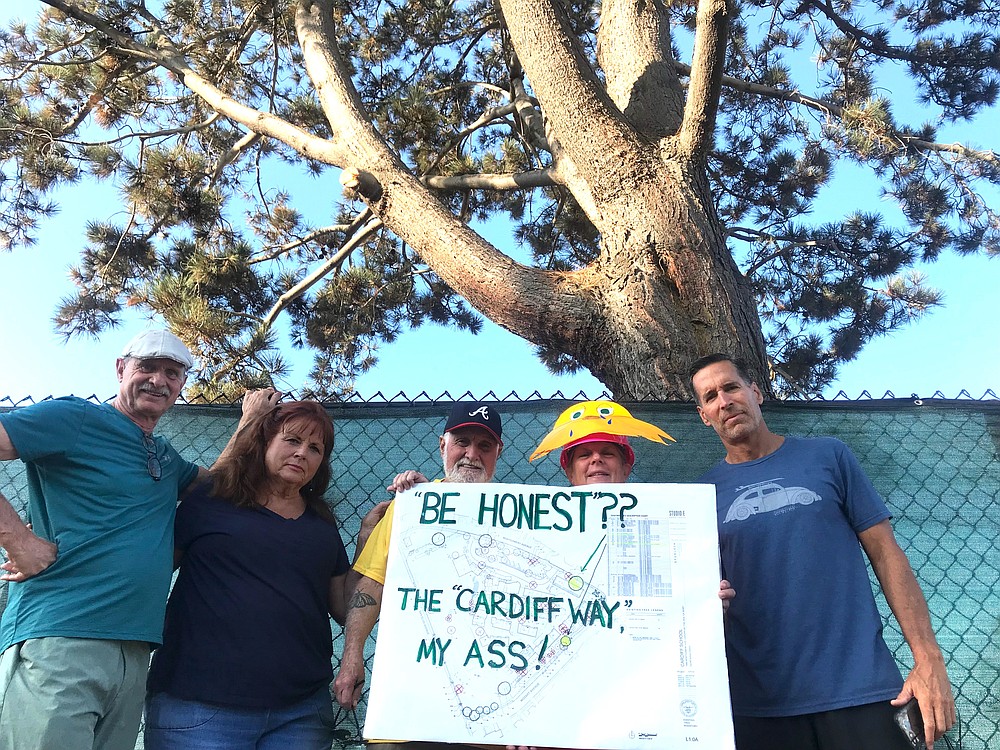 “They knew the tree was there. They could have designed around it.”

“They trenched too close to the tree and compromised the root system. So now they claimed it had to come out.,” said Musik.

“Not true,” said Randy Peterson, the project’s architect. He explained that the tree had to come down once the district revised its plan, responding to community concerns about the increased footprint of the proposed new campus. Newer building plans called for classrooms closer to the school property line. Peterson added the construction crews haven’t even started trenching yet. “We’ve done everything we can to save as many trees as possible,” he said.

Peterson explained, additionally several years ago, the city of Encinitas came down Montgomery Avenue and placed utilities underground. “That compromised the tree’s root structure underneath the street,” said Peterson. “Both the school district’s arborist and the city’s came out and said the tree would be a safety hazard to school children, being so close to buildings.”

The Save the Park and Build A School organization has filed a lawsuit in Vista Superior Court, to stop the incursion of new school buildings onto George Berkich Park. The park was created from the school’s playgrounds 40 years ago in a joint venture between the county and the school district, providing an open community park after school hours. Many youth soccer and football teams use the fields.

According to the American Conifer Society the Torrey Pine, or Pinus torreyana, at the turn of the 19th century, were some of the most rare in the world with only about a hundred trees existing. The tree is only to be found along San Diego’s North Coast and on Santa Rosa Island, west of Ventura, in the Channel Islands chain. Even with the ornamental planting up and down the San Diego coast, most exist within the state’s Torrey Pines Nature Preserve between Del Mar and La Jolla.

The City of Del Mar prohibits the removal of the tree. Unfortunately the city of Encinitas offers no such protection.

Must be developer friendly Republican elected officials. Republicans are all about money and care nothing of history. Bulldoze everything. build, build, build!

Randy Peterson’s statement is completely false. The approved plans for the school show a building right next to the Torrey pine that was cut down, and the tree was marked “Tree to Remain - protect in place”. The plans were updated as recently as April 2019, still showing the tree to remain. They knew where the buildings were planned - this was nothing new, and has zero to do with the lawsuit. In fact, the plans and building placement have not changed for more than a year. Instead, the District and its construction crew intentionally damaged the tree so they could take it down in spite of the approved plans for it to remain. Don’t blame poor planning and the thoughtless and unnecessary destruction of priceless trees on the people who oppose the plans. The District wanted a clean slate for its “legacy” project, so it made plans to cut down more than 2/3rds of the mature trees. They’ve mortgaged children’s futures for some new buildings. 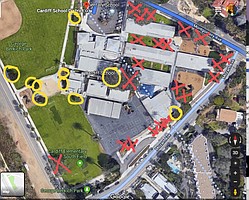 Tree travesty: Red eX’s have already been cut down; yellow circles are planned by SavethePark

Further chipping away at Mr. Peterson’s credibility, he says that construction crews haven’t even started trenching yet. The attached photo of a 6-8 foot deep trench immediately adjacent another tree that the School District claims is supposed to be saved was taken on July 14th. Maybe his definition of “trench” is different? 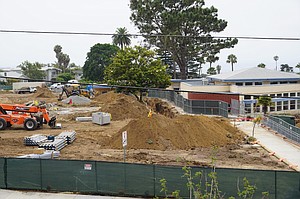 "The school could have . . ." but the developer was too greedy and the school board too stupid (or corrupt) to do the right thing.

Everybody's an environmentalist until it's inconvenient. In my neighborhood on the south slope of Mt Soledad, there's a Torrey, probably planted in 1960, maybe 80 feet tall. (Pacifica was designed by the late architect and landscape architect, William Krisel.) Neighbors plot against the tree because it drops needles and "blocks their view." Let's set aside the relative aesthetic value of a rare, mature tree compared to the sprawling, overbuilt and under planned area below, especially the glaringly lit car lots and golf course juxtaposing Mission Bay. The tree provides shade, cooling by transpiration, a sonorous windbreak. It's a community of wildlife like none other within a mile. But they want to chop it down after their devious plans to kill it succeed so it doesn't scatter pine needles on the pavement. The San Diego City Save-A-Tree program already got chopped. Multiple attempts to contact the arborist after submitting the application on the tree's behalf have failed. Trees cannot fight for their lives. We must.