Glimmers of light and love amid the darkness and hate 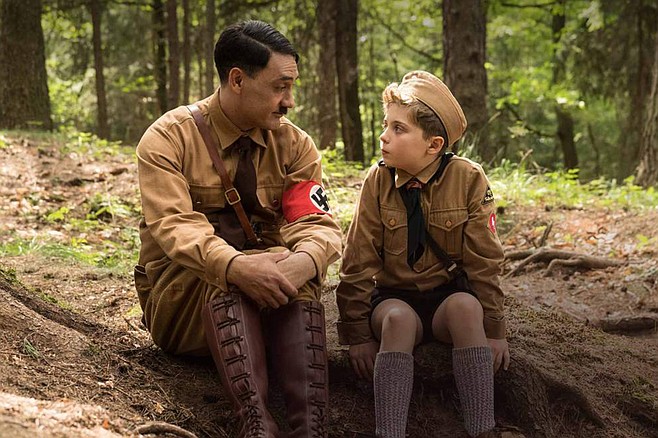 There’s a deep and sincere sweetness in the work of writer-director Taika Waititi. It’s a kind of relentless and innocent good cheer that persists in the face of horror — to the point where the horror is obscured, or maybe even defanged. It was there in Hunt for the Wilderpeople, which made something joyous out of a miserable foster kid and an old grouch who had just lost his wife hiding out from the law. It was there in Thor: Ragnarok, which mostly ignored its own end-of-the-world storyline in order to focus on the gradually growing friendship between The God of Thunder and The Incredible Hulk. (Even the monstrous slaver Grandmaster was almost impossible to hate, thanks to Jeff Goldblum’s sly performance and Waititi’s light touch.) And it’s there in Jojo Rabbit, the story of a little German boy who makes an imaginary friend out of Der Fuhrer to help him on his way to becoming a proper Hitler Youth, only to discover that his mom has been keeping a secret while Dad’s away at war: his dead sister’s Jewish best friend is hiding upstairs.

The result is reminiscent of Roberto Benigni’s Life is Beautful, another film that used the horrors of the Holocaust as the backdrop for a little kid’s big adventure. It’s clear that in both cases, the intentions are entirely good; no one’s looking to exploit or ignore the nightmare atrocity, just to find glimmers of light and love amid the darkness and hate. And maybe find a way to laugh in spite of everything. Look at Hitler! Isn’t he silly, with his little mustache and his need for adoration and attention? After all, it’s not the kid’s fault the world around him has gone mad. He just wants, as his Jewish housemate notes, to belong to a club. And if the club leaders tell him that Jews are inhuman and that someone should write a book about their wicked ways, well, he’s just a clumsy, insecure kid. Some will find this — and the story of his gradual journey toward empathy and love — an utterly charming fable, complete with deadpan Sam Rockwell as a one-eyed Nazi. Some will find it a borderline apologia for haters, a softhearted attempt to find good people on both sides. And some will find it ping-ponging somewhere awkwardly between the two. There’s a reason the poster proclaims the film “an anti-hate satire” — it doesn’t want you to get the wrong idea from what’s on the screen.