The Horatio Alger of Project Runway

The industry is definitely warming up. 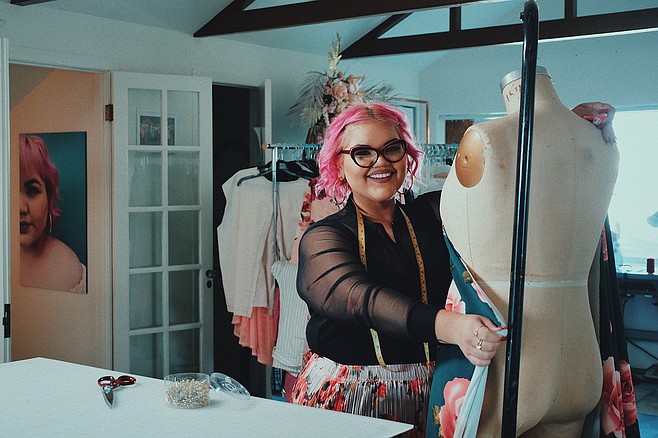 San Diego native Ashley Nell Tipton’s career as a fashion designer reads like a Horatio Alger story. She first put needle to fabric at age seven on her grandmother’s sewing machine. In 2011, she started her own design business out of her parents’ garage, “just like anyone else would.” She sold her creations on the internet. This venture led to unexpected results.

Tipton applied to be a contestant on the reality show Project Runway in 2015. She was accepted. Then, she won.

Life after television looks radically different for her. “My life is definitely not the same since Project Runway. There has been a lot of internal growth for myself as a person.”

Ashley’s passion is designing for plus-sized women. She believes her time on the Runway helped advance the message that bigger women can be stylish.

“I like to say that because I was on Project Runway, it brought more awareness that this community wants to be fashion-forward. I don’t know why it was such a surprise to people, because we don’t live any different than anyone else. We need clothing, and these companies were not offering it.”

One company that was an exception was JC Penney, which hired Tipton to design four collections. The industry is definitely warming up.

“I’ve been creating plus-size clothing since 2011. Plus-size has most definitely grown since then. It has been very eye-opening to a lot of companies… I think they finally saw that this is a multi-billion dollar industry.”

Ashley is currently focusing on a new line based on her finale collection from Project Runway. She’s also teaching sewing and self-acceptance classes at her Hillcrest studio. If you’d like to learn more, or pick up one of her pieces for yourself, visit her at ashleynelltipton.com.