Will customers of seven-story twin hotel complex like these people? 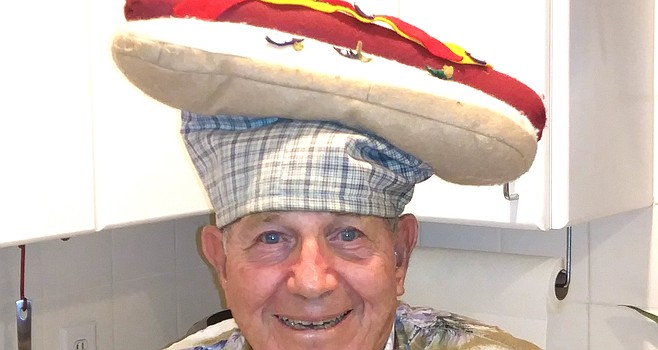 After 20 years as Oceanside’s unofficial greeter, Hot Dog Marty is hanging up his wiener hat.

Then again, maybe not. “When I say I plan something, God laughs,” says Marty Goren, who turns 86 November 5. The New York City native says his appearance Saturday afternoon November 2 at a chili tasting fundraiser in Heritage Park will be his last. “But then again, if someone asks me to help them with something….”

Goren was one of the anchor vendors when Oceanside’s Sunset Market launched downtown in 2007. Every Thursday evening he warmly greeted his regulars in his Brooklynese. “Never talk down to anyone.” Marty and his wife Vicki were known for giving needy people jobs. He says he quit the Sunset Market because of differences with the market’s hierarchy. “I was in the military,” says Goren who was in the army in the 50s, in the air force reserves and then worked as a civilian for the Navy for 20 years. “I could take orders. But [the Sunset Market director] thought he was an emperor.” Since then Goren has been slinging dogs with jalapeno spread or imported sauerkraut at youth sporting events and various community events and fundraisers. 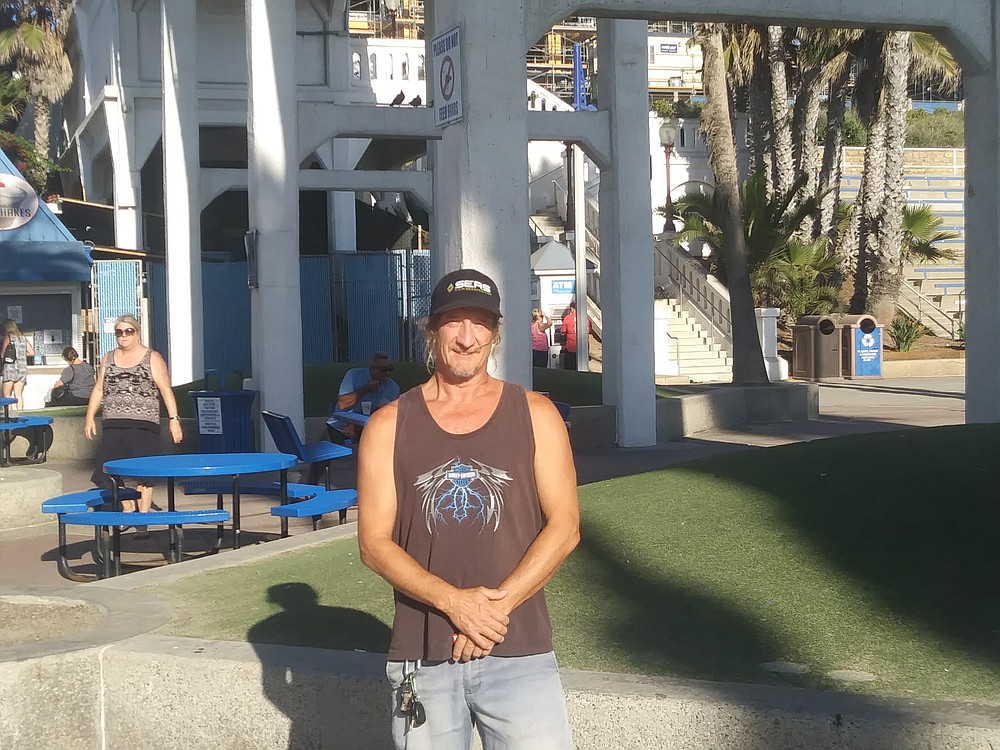 Before he took his hot dog cart to the Sunset Market, Goren was parked for three years in the mid-2000’s on The Strand, Oceanside’s beachfront driveway, near the pier.

That was years before anyone knew the long-promised Oceanside Beach Resort complex would actually happen. This year ground was broken for the construction of a six- and seven-story twin hotel complex currently being built on Pacific Street overlooking the Oceanside pier amphitheater. The vendors currently on the Strand are confident business will be booming once the hotel complex opens in late 2020.

But business for the vendors this last summer “sucked out loud,” said one unhappy vendor. He said it was due to the constricted traffic and lack of parking up top on Pacific Street, all caused by hotel construction. 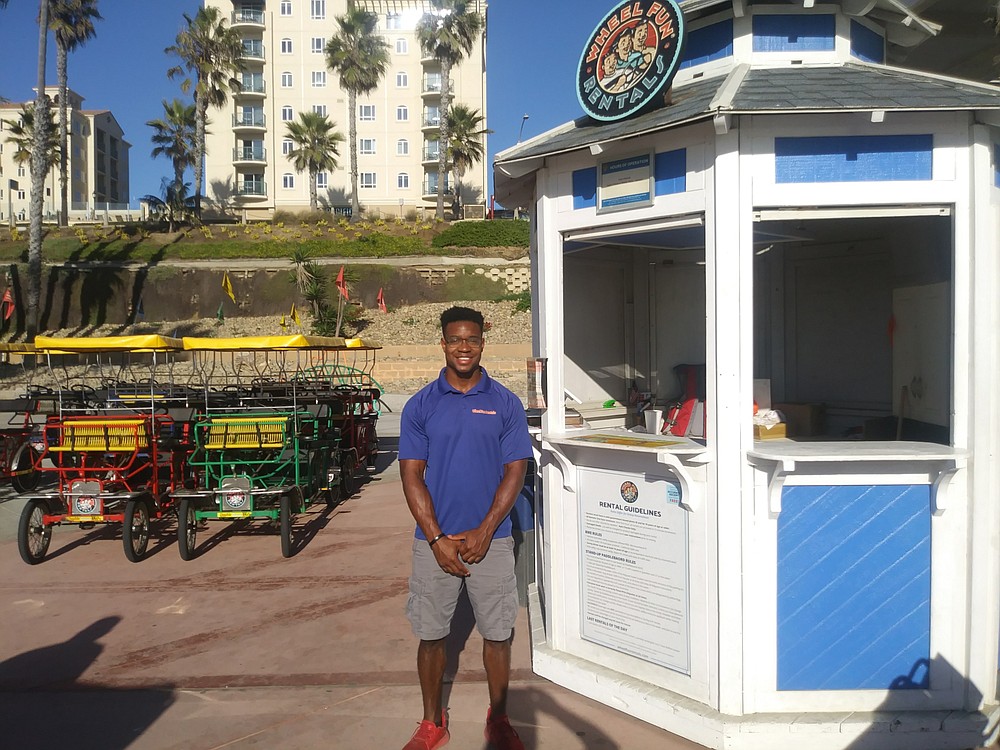 Dave Falseoth’s Dog House now has the vending rights to sell hot dogs immediately under the pier. “My very busiest days last summer were off 50 per cent from the years before.” He says the construction above and the homeless both drove away customers between Memorial Day and Labor Day. “Those were the two main factors. I watched homeless people literally chase away families. Their dogs would bark at people and the families just didn’t want to deal with it. I normally do a great summertime business.”

Falseoth says the unfavorable climate is why he wasn’t open on a recent 80-plus degree Saturday in September. 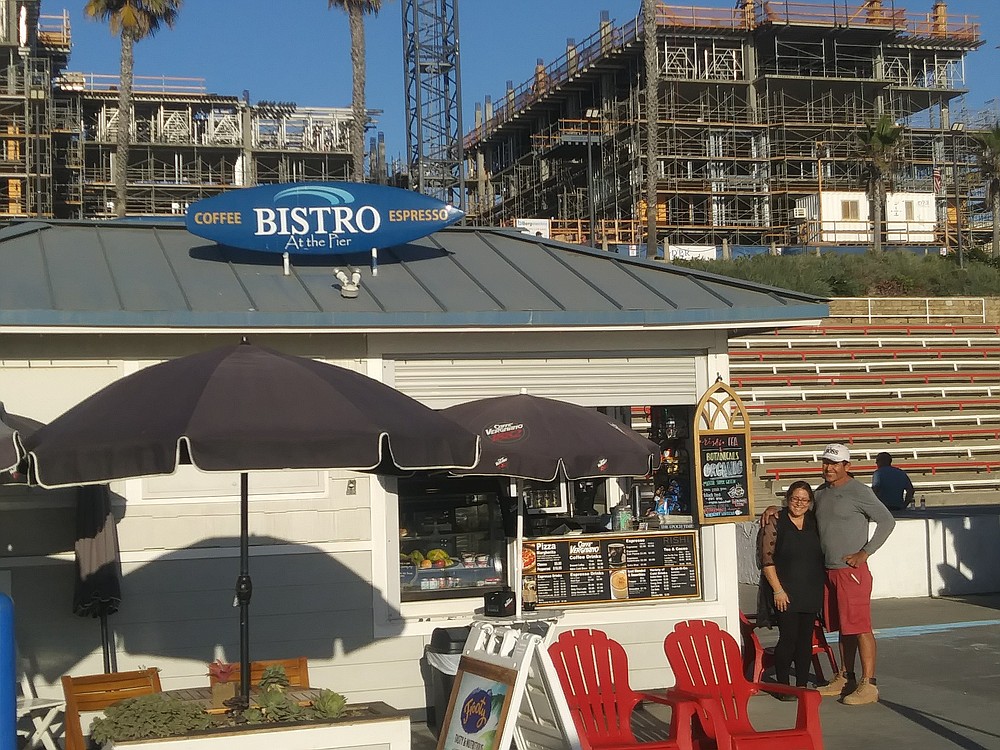 Cleta and Adam Rojas sell coffee year-round on the beach.

“This year was off 40 per cent from two years ago,” says Henry Batham, manager of Wheel Fun rental which is just north of the pier. He has a fleet of bikes and “human powered” covered surreys. He says the lack of parking kept visitors from coming down the stairs adjacent to the pier. “I would say 90 to 95 percent of our business is tourists…the locals have their own bikes.” On good days Wheel Fun might do 100 rentals a day. “Another reason they don’t come down is we have had trouble keeping sand,” explains Batham. “People don’t want to come down when there is no sand on the beach. I think they need to step up their dredging.”

Wheel Fun is open year-round, seven-days-a-week. Batham says business may improve when a new 365-space multi-story parking facility near Pier View Way and Cleveland Street opens in a few weeks. Batham says he is not sure what will happen to Wheel Fun when his two 20-feet-long containers are displaced when a new bathroom facility is built on the south side of the beach amphitheater next year. “That’s where we store everything overnight. No one knows what will happen yet.” 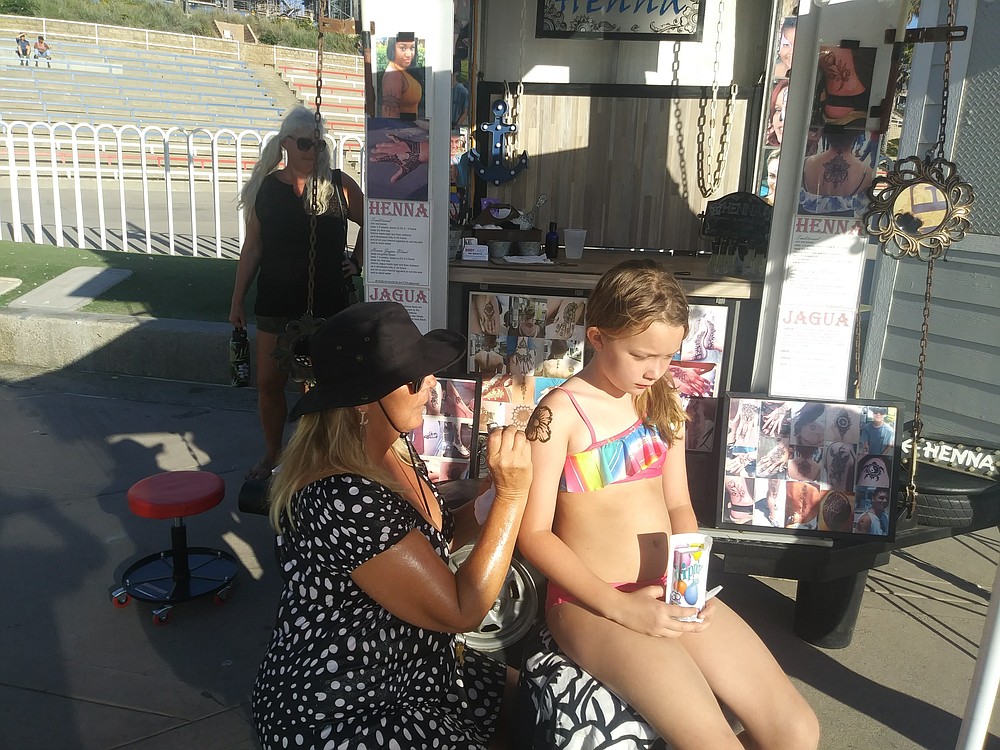 The other year-round beach vendor is Bistro at the Pier. “We are open every day including holidays except when it rains,” says owner/operator Cleta Rojas. She says her husband Adam built the coffee house on wheels.

“People can tell we’re family oriented,” says Cleta. But she admits the beach area sometimes attracts a sketchy crowd. “We kind of act as the community police.” She says she knows when the bad guys start congregating. “See right up there, that’s a hot spot,” she says as she looks at a group in the amphitheater bleachers on a recent weekend afternoon. She says police are always responsive. “As soon as the police show up, they just take off.” The couple say that in the summer when the police park a unit in front of the amphitheater, there are never any issues.

Adam Rojas, who is a pastor at a local church, says he tries to help the local homeless get into a program. “We try and get people who are into drugs and alcohol to get off the street and into Teen Challenge.” Rojas says he initially tries a friendly voice but can adjust his tone to meet the situation.

“I was the first one there when that kid was killed in the [bleachers] two summers ago.” And then there was the screamer. “We had this one guy who was walking up and down the beach just screaming. I asked him what he wanted. He said he was hungry. I told him I’d give him something to eat, and that if he was ever hungry again, just ask us, but that I never want to catch him screaming again. Guess what? He never did it again.”

Susan Marchu of SuSu’s Body Art says she used to live in L.A. creating rock ‘n’ roll billboards. Now she makes non-permanent “tattoos” of tropical flowers or American tribal art with henna and other ink for $15 to $100 a pop. “They don’t want Venice Beach here,” says Marchu. “They want family.”

While all the vendors admitted business was way down this summer, none of them said they asked for any consideration from MainStreet Oceanside which is granted permission by the city of Oceanside to oversee the beach vendor operation. Some admitted they don’t want to rock the boat so that they will get invited to return when the hotels open and Oceanside beaches become awash with a bigger and better tourism crowd.

“We look at it the same way that a downtown business does,” says MainStreet executive director Rick Wright about the brick and mortar shops. “They are suffering the decrease in business [due to construction] just as the vendors are. And do you think their landlord will give them a credit for a reduction in rent?” Kim Heim who directly oversees the vendors for MainStreet says they pay rent on a sliding scale, so that if business is down, so is their space rent payment.

So what about the story that one of the more visible vendors was booted off the beach because it was discovered they were selling, uh, something that was less than legal?

“We have asked people not to come back,” is all Wright would say.

Heim says that while some entrepreneurs have success with a certain formula, they may move on to other ventures and let a hired hand run the business. And that person, he says, may not do the right thing. If that happens, he says, the business goes away.

Best of luck and success to Hot Dog Marty. I'm sure your customers will really miss you. Family oriented businesses are the best!

If you want colorful street vendors go to Tijuana.

Out with the old, in with the new. Corporate greed and hipster excesses are the order of the day. Forget tradition and respect of old school family business.

(generally said) most of San Diego County's tradition is to be modern generation. FADS.