Cemetery Luau will be released on his own Cheddar Goblin Records 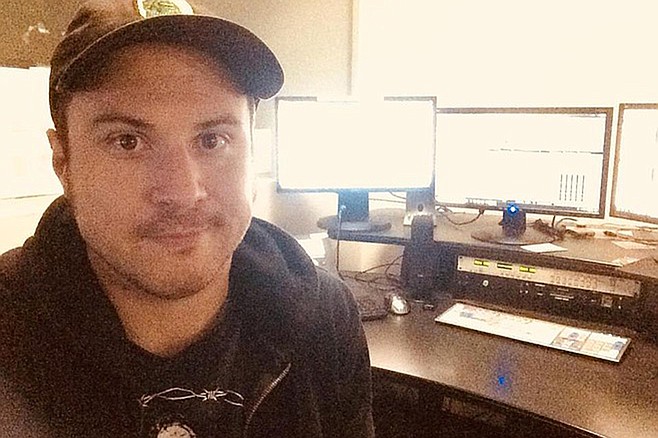 “This is my first official solo studio recorded LP,” says Mrs. Magician singer-guitarist Jacob Turnbloom. “Started writing in summer 2018, started recording on October 19th. Ten original songs and one cover [Squeeze’s ‘Up the Junction’], all recorded in three different studios with my talented engineer and BFF Tommy Garcia, then tracked a bunch of stuff at home in my bedroom while I watched movies that would inspire me [like] Mandy, The Void, and Halloween.”

The full-length was mixed by Sean O’Donnell (Bad Credit, Reeve Oliver), with guest musicians including pianist Joe Guevara (I Wish I).

Turnbloom made his solo debut in 2015 with a single, “Reborn Boys” backed with “Heartbreaker” (Thrill Me Records), produced by Andrew Montoya (the Sess, Beaters). But then recording with Mrs. Magician and Swami John Reis took priority, followed by a lengthy promotional run. It wasn’t until last summer that he was able to restart his own project. “I’ve been consumed by this for a while now, and I finally feel like a huge weight has been lifted off my shoulders as my ideas have finally materialized into actual recordings. I’ve spent the past few months going to the movies a lot and finding inspiration through quiet time alone. I think I saw Halloween and Bohemian Rhapsody 20 times.”

“The title of the record is Cemetery Luau, and it’s an homage to two different groups that I was listening to quite a bit during the recording process, Drive Like Jehu and Calvin Johnson’s Beat Happening/Selector Dub Narcotic.” The album cover is a departure from previous band projects. “It’s just a picture of myself, which seemed fitting. The layout was put together by my friend Alex Kuhse, he recently did the artwork for the band Allweather. Mrs. Magician’s LP artwork is always very themed, Dusty Dirtweed’s artwork always kind of tied every release together very nicely for that band. For these solo releases, I wanted something a little more simplistic.”

With an emphasis on physical media, the record is being released on 180gm vinyl, with 100 copies bubblegum pink and 150 copies of standard black vinyl, including a digital download card in each sleeve. “The label is called Cheddar Goblin Records, I started it to release my own music and other art, but I’m also going to be releasing solo projects from my friends, and other projects of mine, on tangible formats.”

As for the next Cheddar Goblin project, “I’m going to be releasing a new cassette tape with a lot of weird songs, demos, and instrumentals. It’s kind of a sister tape to the Death Tape that I released on Grizzly Records in 2012.”

Turnbloom will play the second night of the Soda Bar’s 10 Year Anniversary Extravaganza on November 2, before heading out on tour as the opening act for the Aquabats, including a hometown gig at House of Blues on November 16.

The Aquabats and Jacob Turnbloom