Cheers to Al Hirschfeld and other cartoonists at Café La Maze 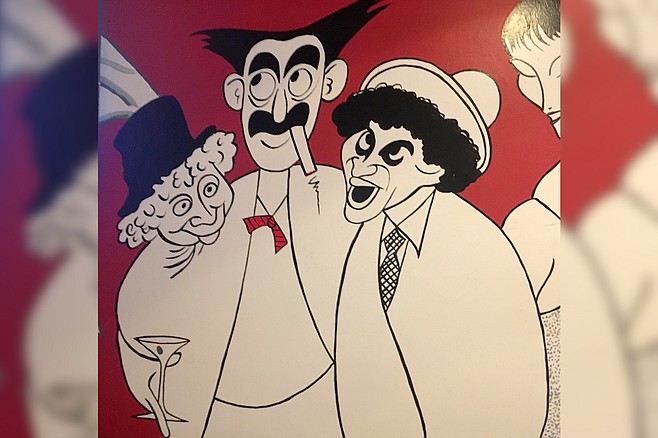 The afternoon sun that tries to slant its way into Café La Maze’s open front door runs smack into a brick wall, but the accompanying breeze does a neat little dogleg and finds me at the bar, waiting for my Manhattan. “What are you making with Wild Turkey?” asks Big Rich as the bartender works. Then he goes back to discussing olden-days television with his friend. “Saturday afternoons, you’d get old-school W.C. Fields, Mae West, Animal Crackers-type shit,” he recalls. Small world: both Mae West and the Marx Brothers (the guys who made Animal Crackers) are on the mural behind me, the one I came down here to see.

A number of things have reminded me of this mural of late. First, there was Wall Street Journal drama critic Terry Teachout’s recent mention of the Al Hirschfeld mural in The Frolic Room, “the last old-fashioned dive bar on Hollywood Boulevard.” Hirschfeld was maybe the greatest showbiz caricaturist ever — wouldn’t it be a hoot to find that he stopped in on a jaunt down to Tijuana back in the day, maybe with one of those self-same Marx Brothers, and knocked out a quick scribble on the wall here in National City? But alas: both style and signature reveal a well-intentioned imitation by one Keith Greene.

Then there was that other scribble on that other barroom wall: Wing Howard’s 26-foot “The Whale’s Last Stand,” which used to adorn The Whaling Bar in La Jolla’s La Valencia Hotel — a place where drinky mystery writer Raymond Chandler used to knock back gimlets. The bar is gone now, remodeled out of existence; the mural was installed in one of the hotel’s boardrooms. Sort of like when the New Yorker moved from 43rd Street into the tower of its Conde Nast overlords and brought with it James Thurber’s office-wall cartoons — pencil on plaster. You can see them on your way to the 20th floor men’s room.

I know, I know: who’s James Thurber? It’s like developer dad Bud says in Heathers: “Some damn tribe of withered old bitches doesn’t want us to terminate that fleabag hotel. All because Glenn Miller and his band once took a shit there.” (Go ahead: ask, “Who’s Glenn Miller?”) At least when the Red Fox Room moves to its new home across the street from its original location, it plans to re-install the carved circa-1650 mantel, created for the original Red Fox in Surrey, bought by William Randolph Hearst — you know, Citizen Kane — for his mistress Marion Davies’ oceanfront mansion in Santa Monica, and then snapped up for San Diego’s well-intentioned imitation of Merrie Olde England. One likes to be of some little use in this world.

When the Whaling Bar closed in 2013, CityBeat writer D. A. Kolodenko penned a farewell that brightsided, “A few old haunts still remain, dear reader. Allow me to present three of them, while they still exist.” Albie’s Beef Inn? Gone. Red Fox Room? Moving. CityBeat? Gutted. But me and Big Rich can still sip and remember at Café La Maze.