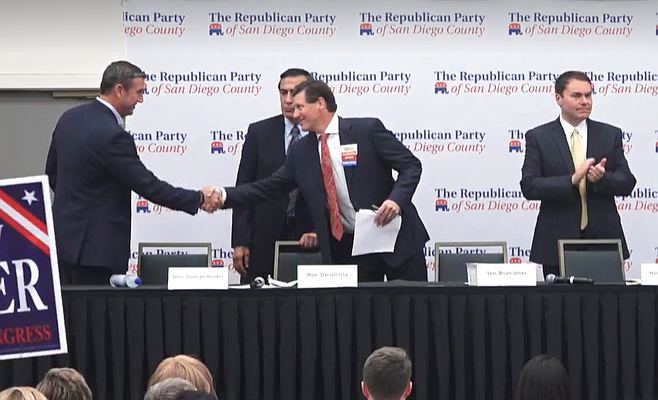 Audience of 1200 showed up at the Town and Country in Mission Valley.

For the first time as an incumbent, Hunter faces strong competition for the party’s nomination.

The candidates agreed on most issues, including border security, illegal immigration and Second Amendment gun rights. Jones was the only candidate to talk to the audience of 1,200 about human trafficking, which he said is the “worst abuse of the border.”

The otherwise congenial powwow was animated by sharp words about Issa and DeMaio district-hopping to run in the 50th. “Where most of these guys are from they don’t know where East County is,” Hunter said. “I’m not going to move somewhere and fight for the easy seat...to find the easy way out. As a United States Marine we stand up and we fight. I would like to see this energy go towards the four seats in San Diego that a Republican doesn’t hold.” He mentioned Sgt. Maj. Juan Hidalgo Jr., USMC, who is running for Congress in the 51st District for the third time, despite losing twice in the same district. 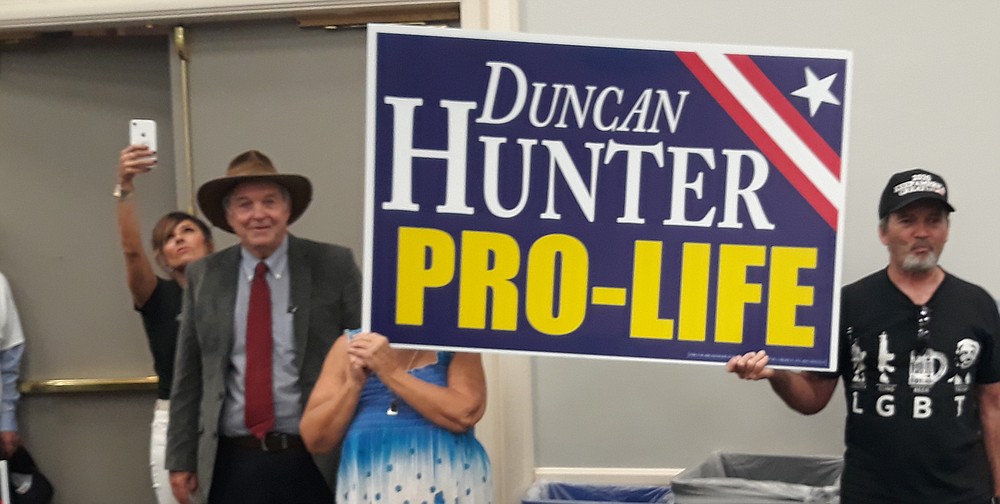 “Nancy Pelosi is Speaker of the House,” DeMaio said as he looked over at Issa, “...because we had 39 Republicans who cut and ran instead of stood and fought.” Issa retired from his coastal North County 49th District seat last year, at a time polling became unfavorable for Republicans in the district. His Republican successor Diane Harkey, who lost the 2018 election, wrote a letter accusing him of undermining her campaign by telling people a Republican could not win the election.

DeMaio lost his bid for mayor of the city of San Diego in 2012 and lost his race for central San Diego’s 52nd congressional district in 2014 by three percentage points. He didn’t respond to a request for comment on why he hasn’t run again for either of those offices. 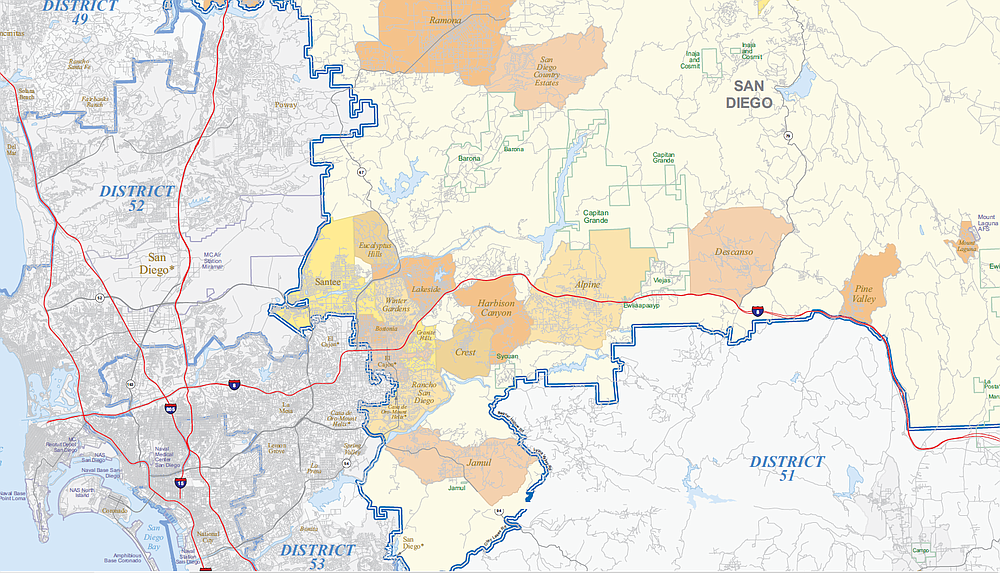 I met Loren and Bianca at the forum. They live in the 49th, which Issa represented for several terms, but they are part of what DeMaio calls the “common sense coalition,” people from across the county and the state who supported DeMaio's gas tax repeal initiative and other grassroots movements and now support his campaign for the 50th.

Bianca says, “We do want to save our district but we want somebody in office who will get things done.” Loren says, “The reason Carl has so much grassroots support is because for the last several years, starting when he was a city councilman, he has been the guy who goes against the odds and steps up for issue after issue...His goal is to do the right thing, to reduce taxes and get government accountability.”

DeMaio presented himself as the man to provide President Trump with policy leadership. He has several multi-point plans, including the Fix Congress First Initiative, which has ten points including campaign finance reform to remove dark money from campaigns.

Jones said, “I’ve grown up in the district...I’ve run for office in this district and won seven times... I’ve represented the people of this district as a Santee councilmember, a state assemblyman and now a state senator...Through my experience in the Santee city council we proved conservative government principles work: smaller government, lower taxes, fewer employees.”

Issa presented himself as the man with experience on federal issues who will have seniority and be ready to do the job on day one. He said he lives closer to “most of the district” than the other candidates. Jones responded, “I don’t know how much closer you can live to the district than living in the district.”

Though the 50th is one of five congressional districts in San Diego County it covers 62 percent of the county’s land area, according to data provided by the U.S. Census Bureau and Wikipedia. It spans north from Jamul through Santee, Ramona and San Marcos to the southern portion of Temecula in Riverside County. The southern edge of the district runs through Alpine to San Diego County’s eastern boundary.

The city of El Cajon is divided between the 50th and 53rd congressional districts. On September 26 Issa and DeMaio held competing rallies in front of the city’s downtown civic center, which is in the 53rd District, not the 50th. The next day Jones issued an invitation to give them a tour of the district they are seeking to represent.

Candidates sparred over abortion. DeMaio says Roe v. Wade is “settled constitutional precedent.” His pro-choice view puts him at odds with many in the 50th who say their district is strongly pro-life. When Jones announced his candidacy on September 25 local Republican Eric Andersen commented on the center-right online political forum, sdrostra.com: “Finally, someone who resides in our district...and is pro-life. (Sorry, Carl, our natural rights are not a cafeteria plan.)”

At the forum Issa said, “We must re-elect President Trump. We must get a court that will overturn Roe and will give us the ability...to protect the unborn.” But questions have been raised about a statement Courthousenews.com reported Issa saying at an Oceanside town hall on March 11, 2017: “I went off to college in 1972, just at the point that Roe became the settled law of the land. For many people in both parties, but disproportionately in my party, they think that it’s not settled. I will tell you that it’s clearly been settled…”

Issa reportedly stated, “Planned Parenthood and other groups will continue to be funded and I will make sure of that.” At the forum Issa clarified he never intended the funding to go to abortion, but rather women’s health care. DeMaio shot back, “Anyone who wants to...suggest that Planned Parenthood is a legitimate women’s healthcare outfit is either a fool or thinks you’re a fool...I sure as hell am not going to vote to fund Planned Parenthood.”

On abortion Hunter said, “I’ve been to places like Iraq and Afghanistan where they don’t value life at all. Whether you are an unborn child, 12 years old, 20 years old or 80 years old, your life means nothing. You can be killed like that.” He said knowing good from bad starts with valuing human life. “How can you expect anybody who doesn’t understand the evil that abortion is...to recognize good from evil?”

“Roe v. Wade is not settled law. We have an opportunity in America right now to make a change to that,” Jones said. “Life is a gift from God. All life is precious, from the beginning to the end. There is a grotesque [abortion and suicide] movement in Sacramento that I’ve been fighting against for the last seven years.”

The one Democratic candidate for the 50th, Ammar Campa-Najjar, pledged support for Roe v Wade and Planned Parenthood during his 2018 campaign. He was endorsed by the National Abortion Rights Action League.

On August 21, 2018 Hunter was indicted by a federal grand jury on one count of conspiracy, 13 counts of falsifying records, 43 counts of wire fraud, and three counts of prohibited use of campaign contributions. Eleven weeks later he won his sixth term to the U.S. House of Representatives with 51.7 percent of the vote and a margin of victory of 3.4 percent over Campa-Najjar. (Hunter won by 27 percent in 2016 and by 42 in 2014.) East County Magazine reported the judge presiding over Hunter’s criminal trial expects it to conclude before the March 3 primary election.

Many 50th District voters I spoke to say they would have a hard time letting Hunter go if he loses his seat. A Hunter constituent sitting next to me at the forum said, "Duncan Hunter is my guy. I like Brian Jones, but Duncan is such a strong fighter. I don’t believe half the charges against him.”

Since DeMaio is as wrong about Planned Parenthood as he is everything, let's all hope he never again gets elected to vote on funding for it or on anything else.

Wait, I thought all gays and lesbians were right about PP???

Has DeMaio ever held a real job, where "govmint" money wasn't paying his salary? Hey Carl! Macy's is hiring, and so is Amazon. Spruce up that resume.