Rooster’s Railroad at the Sportsman’s Pub 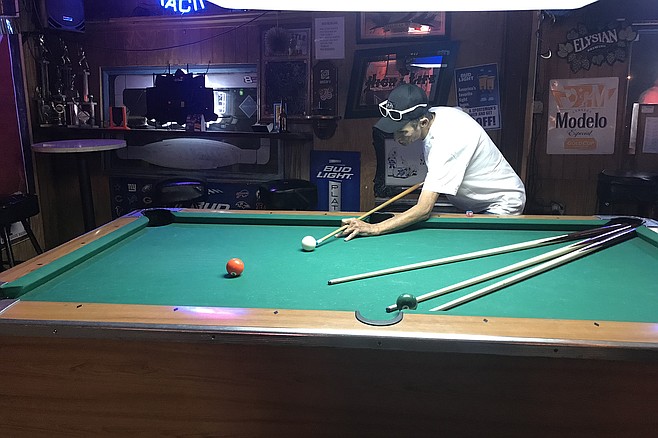 He’s kidding, of course. Can’t gamble on games in bars like this. We’re in the Sportsman’s Pub, Lemon Grove, around 9 pm. Dive bar? Guess so. But the contest between Rooster and this guy who thinks he can beat him at pool is fractious. Guy’s talking up a storm as Rooster tries to concentrate. Wants to know why Rooster’s personal chalk is gold and not blue like the rest.

Rooster stands up abruptly. “You be sharking the hell out of me!” he yells. “Too loud in the library!”

Rooster’s Railroad at the Sportsman’s Pub 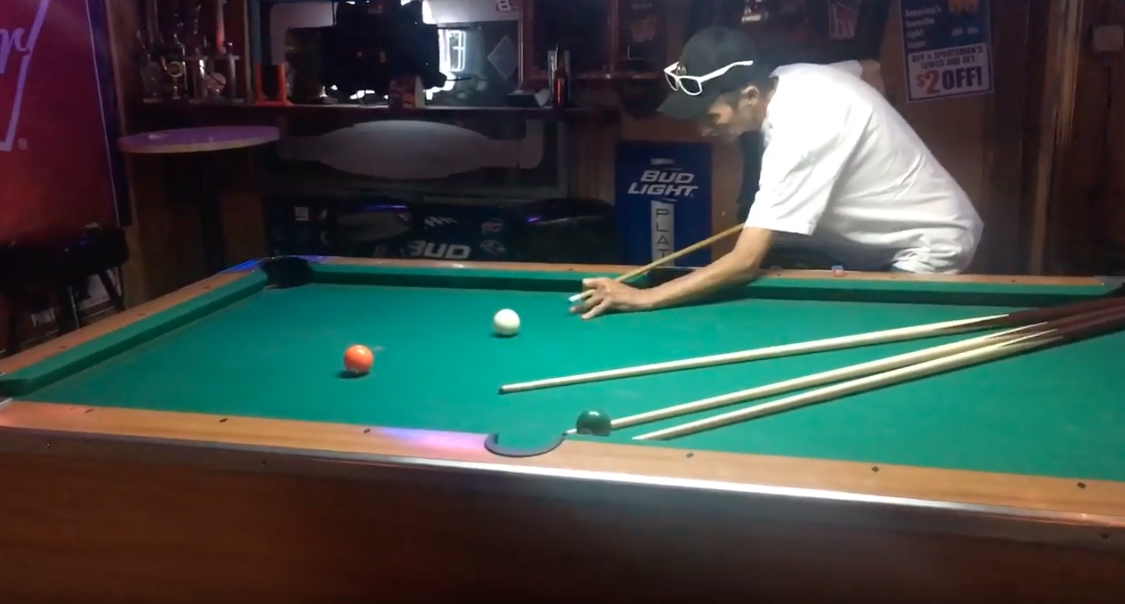 Rooster’s been coming in here 30-plus years. Has gone through three owners. He teaches pool. He uses his own $1000 cue. Not that he’s using it on a game like this. That’s for special occasions, worthy opponents.

“Call your pocket, dude!” He says as the guy wavers between choices.

Then he hits, misses. “Now watch this bird with a broken rib,” Rooster says. He cracked a rib the other day. He’s hurting. Makes him irascible. But that doesn’t stop him sinking three balls in a row. “Money won is twice as sweet as money earned,” he jokes. Then, unaccountably, he misses an easy one.

“Never beat a guy in front of his girlfriend,” he mumbles.

But I’m here tonight to learn something special from Rooster. “The Railroad.”

First, though, he goes through certain necessary preparations. He heads to the jukebox. Starts pushing buttons. “That should do it. My set. Uh, you’ve got 42 songs ahead of you sweetheart,” he says to the gal coming up to pick a tune. “It’s a ritual,” he says. “I like to start with B.B. King.”

The next two minutes are spent picking lint off the table. “This table has more rolls than a bakery,” he says. “But we’ll give it a try.”

Now he’s finding suitable pool cues, laying them out in an open-ended double V from the corner pocket to the side pocket on the other side. Then he heads off and returns with this big long box, and reverently hauls out a cue in two parts. He screws them together. It’s intricately decorated all around the handle.

I’m thinking he means it figuratively, but no. There’s a signature. “Gino Ferrari.”

“Ivory,” he says of the white wedge inserts. “From back in the day.”

Now he arranges the 14 ball in the middle of the table, and the 11 on the lip of the side pocket. BB King’s wailing out “The Thrill Is Gone” as Rooster makes attempts number 1 and 2. Each time a ball goes in a pocket when it shouldn’t, or vice versa. “Maybe gave it too much left English,” he says. “Got a right squirt.”

Eric Clapton comes on. I’m the Hoochie Coochie Man/Everybody knows I’m here. Rooster takes a moment to sip his cushioned can of Bud, and then to nurse his rib. Then he straightens up. “Back to the office,” he says.

He checks the angles of the three cues angling out from the corner pocket, swick-swacks his cue head with his personal golden chalk, arranges his finger and thumb so he makes a closed bridge through which to stick the cue. Lauren, the girl behind him, puts her finger to her lips to tell people to keep it down, and he fires his white cue ball into the orange 5 ball which goes straight into a corner pocket. Meanwhile his cue ball hits the side pocket’s cushion on its angle, rolls back up between cues 1 and 2, hits the corner pocket on its angle, bounces onto the tracks to actually ride the “rails” between cues 2 and 3, rolls down them all the way to the side pocket and has just enough force to nudge the waiting green ball into the side pocket. Cue ball teeters to a stop without falling in the hole.

“That was it!” says Rooster. “That was it! Railroad!” He does a victory lap around the table.