Path from Cardiff to Leucadia 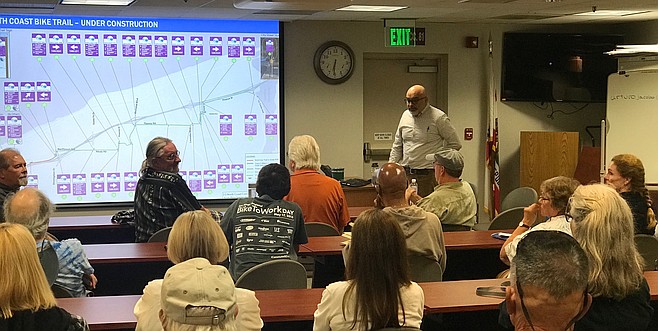 Encinitas locals had their first opportunity on October 7 to see an upcoming master plan for a mid-city bike lane to run east of I-5, the entire length of the city, from Manchester Avenue in Cardiff by the Sea, to La Costa Avenue in Leucadia. The future project is designed to serve the residential neighborhoods along the freeway, as part of the on-going expansion of I-5. 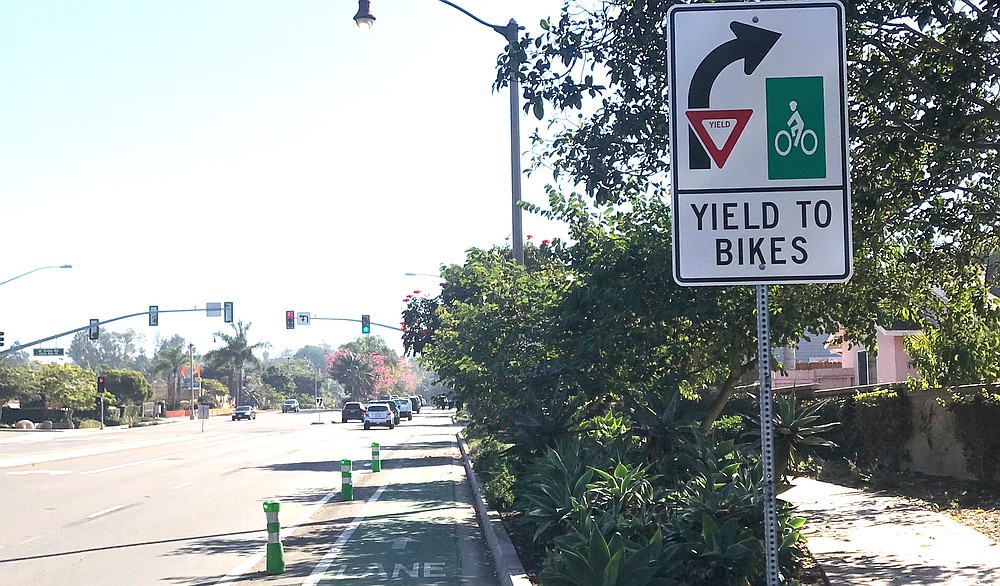 Some pylons appear to have been run over.

City leaders have been criticized for giving the city’s roads over to bicyclists, causing more traffic, in their effort to get people out of cars. The city’s mobile electronic signs on Coast Highway have flashed messages advising “Bike Town Slow Down.” 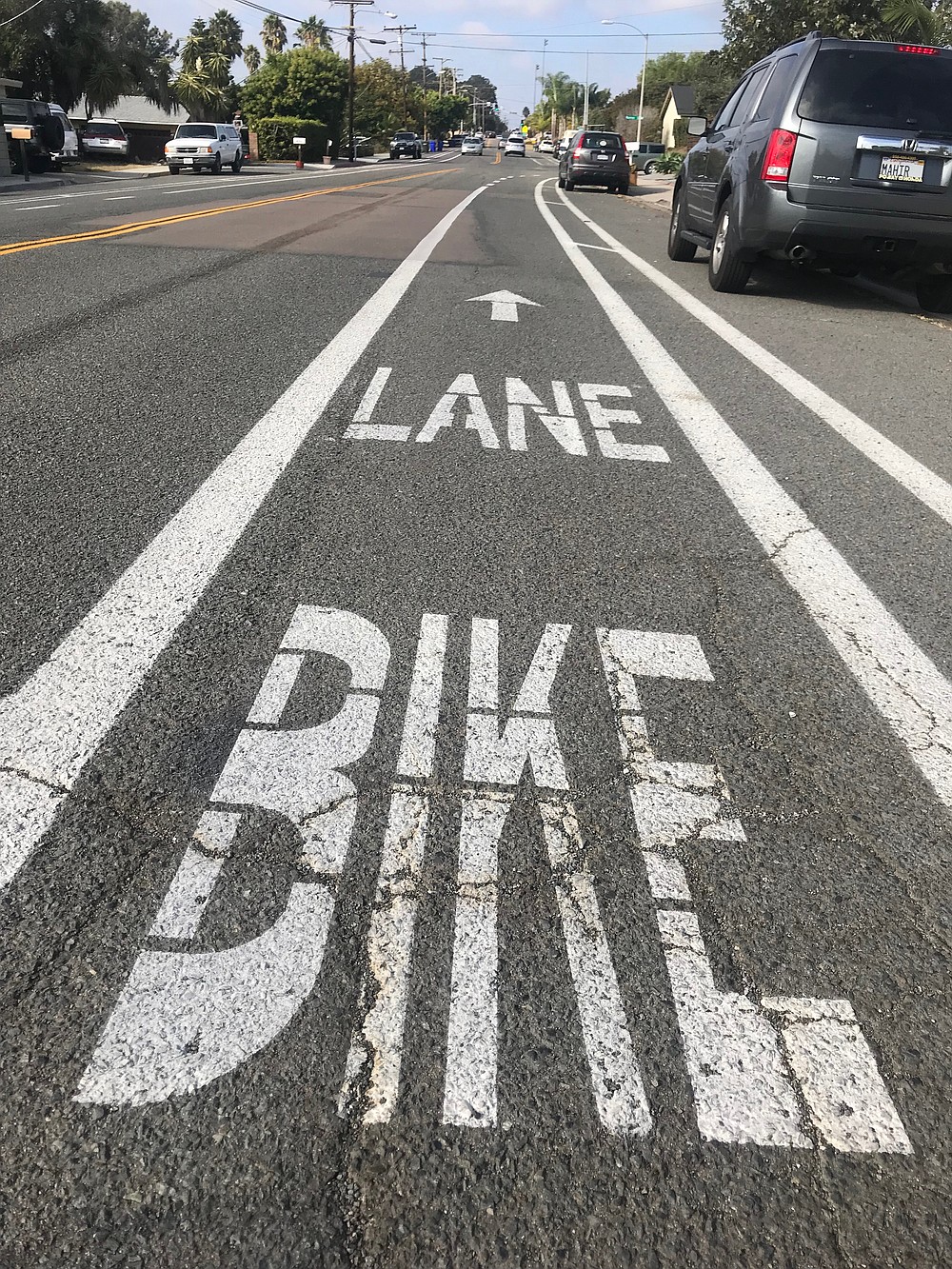 “Only 0.5 percent of the population can ride bikes."

The recently installed bike lane on Leucadia Boulevard, from the freeway east to El Camino Real is protected by the installation of bright green plastic pylons. Occasionally the pylons appear to have been run over and flattened, assumingly by angry motorists. The city quickly replaces the pylons.

About half of the meeting’s 40 attendees indicated they were cyclists, and will use the proposed bike lane. But even hard-core cyclists were skeptical of some sections of the proposed eight-mile bike path. Starting at the San Elijo Lagoon Ecological Preserve at the I-5 Manchester off-ramp, the lane will proceed north to Mackinnon Avenue, Nardo Road, Requeza Drive, Westlake Street, Encinitas Boulevard, Saxony Road, Urania Street, terminating at La Costa Avenue.

Bike activist and member of the city’s Environmental Commission Jim Wang said some of the proposed bike lanes are on narrow roadways. “The routes are dangerous,” he said.

Caltrans is the lead agency for the city in funding and completing the new bike lanes, as part of the $240 million freeway-widening project. While Caltrans engineer Auturo Jacobo didn’t have exact figures, he said about three to four percent of the La Jolla Village Drive to Oceanside’s Harbor Drive freeway construction budget is dedicated to bike paths, as part of the state’s transportation multi-modal mission.

The adding of the mid-city bike lane will be reviewed, with public comments welcomed, over the next six months. Project manager Jacobo said phase one of the bike lane project, expected to be completed in 2021, would only be adding signage and striping to existing roadways.

Resident Mary Conway representing some of the frustrated motorists in the city, stated after the meeting, “Only 0.5 percent of the population can ride bikes,” indicating too much money is being spent for little-used bike lanes. “The changes [in Encinitas] are happening too quickly.” She said she plans to show up to a city council meeting, pass a hat, and ask who is willing to give up their car keys.

I believe in sharing the roads, but one thing cyclists need to keep in mind - exercising your full rights as a cyclist could be to the detriment of your own lifespan. The vehicle will always win.

Very good point. A bike lane is only a legal right to be there. It doesn't protect one from a 2-ton vehicle. Same with pedestrians in marked crosswalks. Fault will go to the person hitting the cyclist or walker, but that's not the "my legal right" hill I want to die on.

I do want to point out that, even without a bike lane, there is a legal right to be there. All a bike lane does is say that, except near right turns, that part of the road is for bikes only.

A bike rider can end up dead right.

The real road diets here are the potholes; as for years the roads been literally thinning down and losing weight as more asphalt gets dissected. This only further influences Cyclist's to move out of their driving profile; as the Cyclists have to watch that the motorists road behavior of possible assault with those deadly 4-wheel, rolling boxes. As motorist's, meantime are in ISOLATION, from the rest of outside society. (be it cell-phone, self-chat, multi-chat, dreaming, music, etc,) CARS ARE THE ADDICTION. Why's none of you going to SANDAG meetings -- for the (sake of continuous years of trouble with) lack of pothole repair?

Seems that Mary Davis is not going to be happy swallowing that never-ending DIET --- of capsules to road-painted BIKE LANE wording and/or BIKE LOGOS.