Ambassador of the Beatles 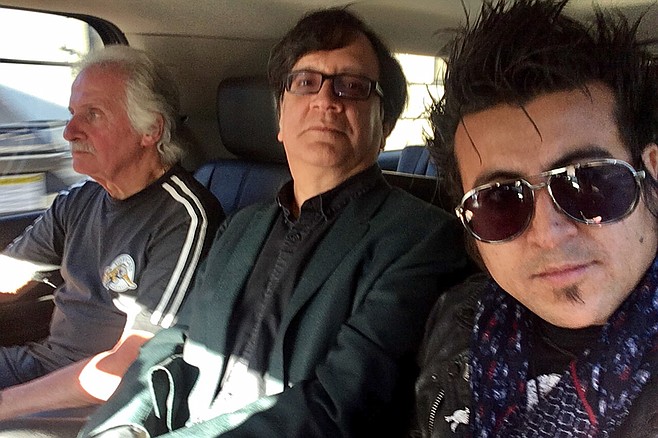 San Diego keeps turning up in the Beatles story, from George Harrison’s part-time residence at a North County meditation retreat (as well as staying with Ravi Shankar while working with the sitar master in Encinitas), to Paul McCartney’s famous 2003 private birthday party gig in Rancho Santa Fe, to John Lennon’s long lost guitar being found in Sorrento Valley in 2014. Original Beatles drummer Pete Best has performed and recorded with several area musicians while in town, and therein lies the unlikely origin of how one local is currently standing in for the Beatles’ original bassist, the late Stuart Sutcliffe.

“We met Pete Best’s brother Roag in Liverpool. Me and Pete started exchanging messages on Facebook, and we invited him to come and play with us in San Diego,” says Falling Doves frontman Chris Leyva, who ended up befriending the drummer. “He named me Ambassador of the Beatles Museum in Liverpool. It’s kind of like being knighted.”

Part of plugging the Museum involves sculptor Andy Edwards, known for his Beatles statues on the Mersey Dock in Liverpool. “He asked me to take a [model] statue of [Beatle’s manager] Brian Epstein to the U.S. and present it around to see if we could give it some media attention. The intention is to give Brian his own statue in Liverpool, but getting funds from the LGBT , and other professional organizations, as England is still too homophobic to recognize an icon that made the Beatles.”

In the course of talking about the Epstein statue, “The topic of creating a Stuart Sutcliffe statue came to fruition, and he asked if I could get a Hofner like the one he played. I went back to Pete and Roag Best and asked to borrow the replica bass at the Museum, since that’s a perk as a curator. The bass was almost a replica, besides a few knobs. It belonged to Frank Sinatra's bass player. When I brought [Edwards] the bass, he said ‘We need a Stuart. You’re a rock dude, you model for the statue.’”

Next year, the Leyva-modeled Stuart Sutcliffe statue will be placed in front of the Sefton Park Hotel in Liverpool, where Sutcliffe lived for a time. “Phase one will be a heavy resin, very hard and heavy. Later in the year, when more funds come in, we’ll bronze it.”

A grand opening concert is planned for June 23. Guests will be able to browse memorabilia, books, art, and Fab relics donated by the Cavern and the Magical Beatles museum. “The Hotel’s Gallery will be serving as a host to some Stuart-specific memorabilia, along with some Beatles memorabilia from 1957 to 1962, highlighting lithographs from [Beatles collaborator] Klaus Voorman, [Sutcliffe’s girlfriend] Astrid Kirchner, and some Pete Best autographs and a few things to tie in the area, as well as an open door to local and international artists.”

The property is currently open as a hotel. “I worked all of August collecting memorabilia, books for the room and art from locals in Liverpool and some stuff from the Cavern. The Magical Beatles museum donated some Items and assistance...the Hotel will have a Hard Rock Hotel feel, but with a more personal touch: autographed guitars, a Beatles drum head signed by Pete Best, and we're also hoping to celebrate Liverpool artists that changed the face of the area like Echo & the Bunnymen and the La’s, to name a few.”