“Nothing would be recorded. To see it, you had to be there.” 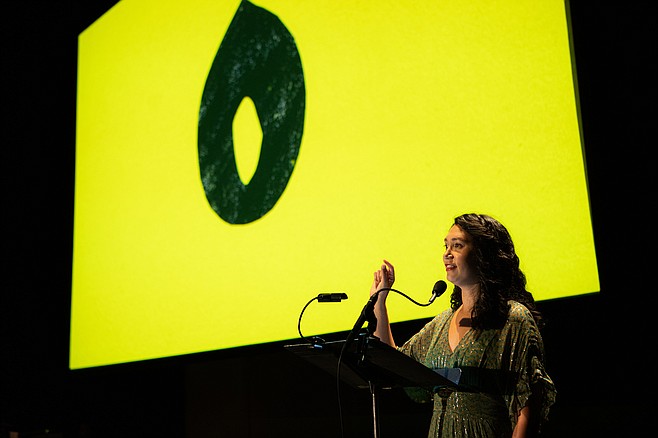 The California Sunday Magazine is included with “select Sunday copies” of the Los Angeles Times and the San Francisco Chronicle. A one-year, six-issue subscription costs $39.95. The October 2019 issue featured a total of seven advertisers. But they’ve lasted five years now, an impressive run for a new entry into the blasted wasteland of print media. But then, they’re not strictly a print operation. CSM is a print offshoot of a live event: Pop-Up Magazine, a touring show that, in its founders’ vision, “would unfold like a classic general-interest magazine, and end with the cast and audience mingling at the lobby bar. Nothing would be recorded. To see it, you had to be there.”

Pop-Up Magazine paid a visit to Observatory North Park on September 23; the “issue’s” theme was escape. From places (Cuba), from times (a criminal past), from situations (giving a drug dealer a ride at knifepoint, who turns out to be an old schoolmate from the neighborhood, and who is at the moment just trying to help a bleeding woman out of a bad situation — in Benghazi). Several of the 10 presented pieces appeared in the corresponding print issue of CSM. Some played better onstage: Chris Duffy’s account of becoming a meme — in his case, Clueless White Guy, though he contacted several others, including Disaster Girl and First-World Problems Lady — took advantage of his work in stand up, and from the joys of a well-timed visual reveal. And his emphasis on the strangeness of seeing yourself repurposed without regard for your actual self got a poignant bump from sound: the meme-people’s very own voices, as their recorded reactions played over the images. In print, it plays as a busy, two-page infographic. Some where stronger on the page: Lucas Foglia’s photo essay on the spiritual seekers of Sedona worked against his gently exploratory intent when recounted before a live audience that had just heard two comic stories and one tragic one. Several people near me giggled throughout the slideshow of UFO hunters and energy healers.