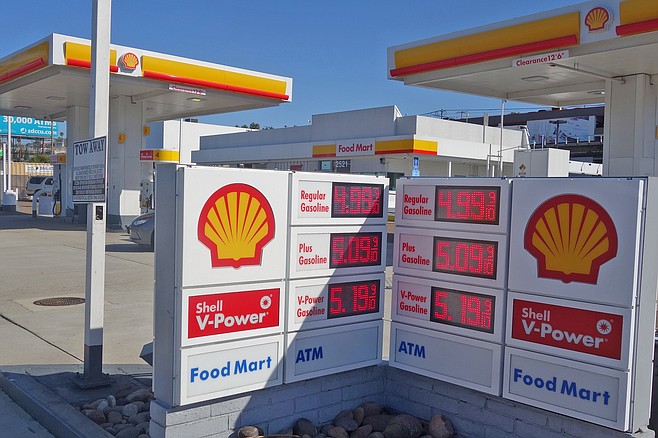 It seems President Trump was correct in his assumption that the Saudi Arabia oil field bombing would not send the world’s gas prices into a tizzy. The U.S. is now the world’s largest exporter of oil, and the Saudis are repairing damaged refineries, and their gas and oil is flowing again.

“The national average is moving lower, but don’t tell California,” posted Patrick DeHaan, a leading petroleum analyst. According to gasbuddy.com, San Diegans have experienced a 60-cent-per-gallon price jump since the September 14 refinery attacks.

The summer saw stable gas prices in San Diego, averaging $3.50-$3.60 per gallon (regular gas, cash price) throughout the county. On September 15, the day after the attacks, prices began to spike, sometimes up 10 cents a day. Most stations are now over the $4 threshold, the average is $4.20 countywide – prices not seen since July of 2015.

“Prices skyrocketed due to concern that four [California] refineries suffering various outages would impact production of gasoline,” reported DeHann. DeHaan expects California prices to rise another 10-20 cents before leveling off.

Frank, the station’s general manager, explained that when gas goes up, the branded stations get a better deal from the oil company corporations, and a guaranteed constant supply. “The independents are fighting for surplus gas right now, that’s why their prices are going up so fast,” said Frank.

When gas is in surplus, the independents force prices downward, major brands usually have to follow. As manager Frank admitted, in recent months, he got as low as $4.49.

In a rapidly raising gas market, it seems one can no longer depend on the county’s usual lowest priced areas of Oceanside, Escondido, and Santee/El Cajon. As prices fluctuate, many independents are over $4. Nor are Costco’s and military bases always the cheapest.

In heavily regulated California, there is no difference in gas quality or performance from the county’s lowest priced station at the La Jolla Trading Post on Highway 76 in Pauma Valley at $3.58, vs. the highest, the Chevron’s on West Rancho Bernardo Drive at Rancho Bernardo Road, and Jackson Drive at Center Drive in La Mesa, both priced at $5.09. Except at the Trading Post station, part of the La Jolla Indian Reservation, one can now play on 75 new slot machines.

Of course it is ceehound619. I'm sure Newsom's "investigation" into the matter won't go anywhere.

might get him some "campaign contributions " to keep quiet in the matter .

All San Diego County gas comes from the Mission Valley Tank Farm. Gas is shipped to San Diego via a pipeline. There is no difference in gas from brand to brand except the price. I know because I used to deliver gas to various service stations. I would fill my tanker truck and deliver it to Brand A station then return to the same loading bay and take the same product to Brand B station. Chevron is and has always been the highest price way back to the Standard days. Back in the 60's some stations (Hudson Gas) did ship poor grade gas from Texas to their stations but those days are long gone. The gas sold at Ehernberg AZ (just across the border from Blythe) comes from California. People who pay for "branded" gas (Chevron, Shell, etc.) are paying for hype and advertisement. Boycott all name brand stations and go to Costco, Arco or an independent.

I remember hudson gas when it was 26 cents a gallon. I seems like the roads were in good shape then too

That makes you and I older than dirt. Remember the gas wars? Used to drive to Escondido to get gas at 16 cents. (Ah the 60's)

I missed out on that price

At the, I was too busy looking on the bottom of my Hot Wheels --- if it was made within China or in USA.

We manufacture our own gas and print our own money. We're rolling the dice until we're caught...

For what us drivers are too high on --- petro here is too cheap.