The scandal of cell phones at classical music concerts 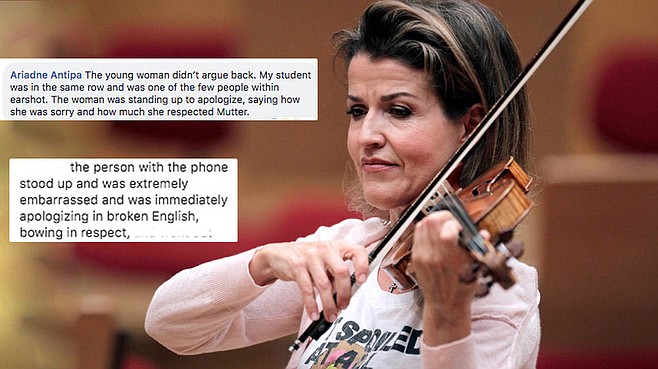 No one in the history of recorded classical music has benefited more from media than violinist Anne-Sophie Mutter. At age 13 was selected by Herbert von Karajan. At age 15 she was recorded for the first time with von Karajan and the Berlin Philharmonic on the monolithic Deutsche Grammophon label.

Over the past four decades she has continued to be a staple of the “golden label.” DG and Mutter just released a new recording of John Williams’s music, conducted by the venerable composer, on September 27, 2019.

However, don’t you dare try to make your own recording of Anne-Sophie. At a concert of the Cincinnati Orchestra, a patron in one of the front rows tried to do just that. Mutter stopped playing and confronted the patron in the middle of the concert. The patron pushed back and was eventually escorted out by the president of the symphony.

People then took to social media, ironically, to implore patrons to honor the artform. In keeping with their anti-technology agenda they should have taken an ad out in the local paper and maybe created a direct-mail apology for the patrons in attendance.

I go back and forth on this issue.

If we immerse ourselves in reality we understand that technology doesn’t slow down, it speeds up. We understand it is a matter of time before devices confirm their presence in the concert hall and the opera house. For now, devices are a naughty secret in the classical music world.

Here’s what I regard to be the sad truth. This patron was so moved, by the music being performed, that she wanted to do the impossible and capture the moment for posterity. For this she was publicly shamed by a world famous artist. That Mutter stopped playing in the middle of the slow movement of Beethoven’s Violin Concerto I find to be a transgression of titanic proportions.

What are the odds that patron ever goes back? I know I wouldn’t. I would tell that story to all my friends and encourage them to never go to the Cincinnati Symphony.

What could have been a tiny personal sharing moment, albeit misguided, is now almost certainly a raging, personal anti-Cincinnati Orchestra campaign.

Classical music has managed to turn a supporter into a new hater. I could be wrong, and my theory is complete conjecture, but how would you react?

Who is to blame? It doesn’t matter.

In sharing this story with some friends they mentioned the distraction of a phone screen. I mentioned the distraction of someone next to you turning pages in the program during the performance. Are we really that distracted by the light of a phone screen? How about sitting next to a “loud-breather” or a chronic cougher, or someone who thinks a loud-whisper isn’t loud? A silent screen seems somewhat innocuous in comparison.

This one isn’t difficult. Do the rules prohibit photography in the private venue ? If yes , and you can’t help your narcissistic behaviors (filming everything ) then stay home.

I'm not sure if a concert hall supported by the city, county, state, and federal government could be considered a "private venue" in the same way Broadway theaters are.

Capture the moment... relax and enjoy. Comparing turning the pages, coughing or loud breathing is apple and oranges. It's necessary to turn the page or cough occasionally. It's not necessary to film everything, and re-live every moment twice. Filming everything is extremely annoying to others, but in today's society, it's the norm. Whatever happened to on or off?

Garrett Harris -- as a stage actor, another performance area that bans cell phones, I'll let you know that cell phone users are distracting to the actors, distracting to the audience, and show a complete disrespect for everyone else in attendance because it's not about the performance, it's about the cell phone user being selfish. Furthermore, patrons pay for an exclusive space, where they can enjoy something without a screen. Last and perhaps most important, unauthorized recordings are a form of music piracy and could potentially deprive the artist of royalties for their work, as the cell phone user will be giving away their work free of charge. The problem is cell phone users who need to get over themselves. Your phone is not your life. Grow up.