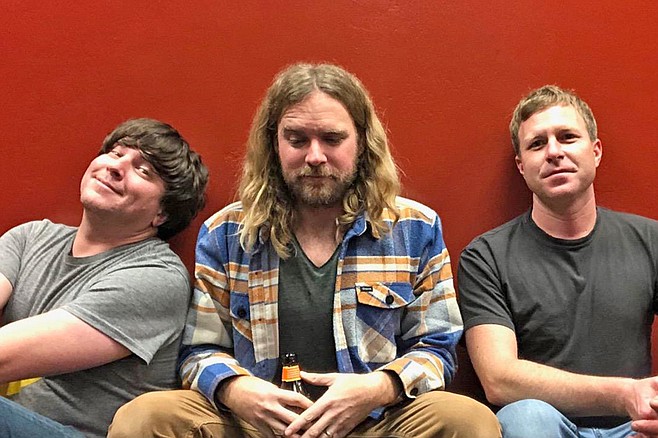 Circa 2007, members of Ocean Beach-based rock acts Vinyl Radio and Cape May united to start a new project — the Swedish Models. According to guitarist Andrew Bernhardt, the band was a collection of “thrashy dudes that really enjoyed playing live, but partied pretty hard. It was like a brotherhood kind of mess.”

The band veered a little more into indie-pop than their previous outfits, generated a good amount of buzz and, like many local acts with plenty of promise, fizzled out after a couple of years.

But the core of the group wasn’t done just yet. A couple years back, Bernhardt reached out to multi-instrumentalist Dustin Paul to see if he had any interest in resurrecting the band as a studio project.

“I quit my ten-year job and it was right before or after I had a kid,” Bernhardt explained. “I said, ‘Let’s start recording a song a month,’ and just have a goal based around songwriting and getting back to together and being friends and hanging out. When (Andrew) McNally was able to come back around it was awesome.”

“I hadn’t heard from them or talked with them in quite a while,” McNally (drums) said, “since Bernhardt’s wedding or so. Then I got a random voicemail one night from Dusty, and then he texted me a recording. I listened to that and shortly thereafter the three of us got in (Earthling Studios.) After that, we started trying to get in just about monthly. We would basically do one song per sitting.”

The songs begin as skeletal musical concepts, which the trio flesh out during the studio sessions until they are fully formed, genre-hopping monsters. As a result, the new songs come across as more complex than what they were writing ten years ago. That being said, the band’s signature Kinks-driven sound remains intact.

“A lot of bands these days have one main driver or a powerhouse duo,” Bernhardt explained. “It’s interesting because it really is the three of us coming up with different chords and being super democratic. I’ll never try to push ‘Oh, I want two of my songs in the next two sessions’ because I want to be introduced to new stuff. Then we layer on top of it.”

As a result of their focused efforts in the studio, the band have succeeded in releasing an album in their second-coming — the aptly titled Extra Credit.

The original incarnation of the band played plenty of gigs around town, but could never pull it together enough to release an album back in the day. Now the reunited, studio-savvy veterans have to figure-out the live aspect of their existence. They have a new bassist (Chad Pittman) on board, and rehearsals have commenced. If you catch them live, watch for one of the band’s signature elements — McNally and Paul playing dual-drums on two different kits that share a bass drum. “We figured out a way to make a triangle kickdrum and do three drummers. So we have a superfluous third drummer,” Paul said.