E-mopeds could be next weapons in S.D.'s high-risk transit wars

"I hope Revel users have signed their organ donor cards" 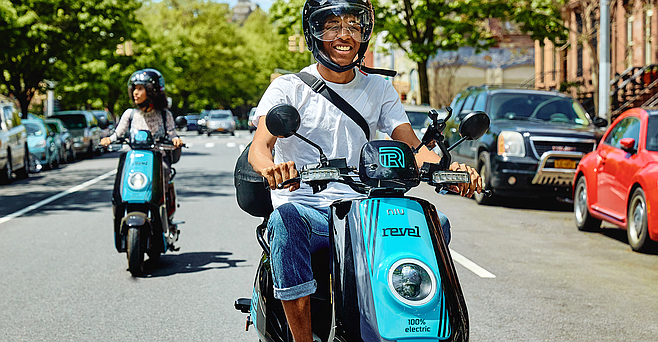 As the termed-out administration of San Diego mayor Kevin Faulconer continues to grapple with the explosion of so-called e-scooters, another kind of e-mobility device likely to hit congested city streets is spending big to assure the city's favor.

Faulconer, slow to respond to the e-scooter tsunami that washed ashore here a year or so ago, recently proposed a midnight until 5 a.m. curfew on riding of the devices, along with ways to stop would-be underage riders from getting them by multiple renting adults.

But the mayor and his well-paid minions – at least one of whom has already decamped city hall to work for a lobbying outfit representing e-mobility purveyor Wheels Labs Inc. – face a new wave of personal vehicles in the form of Revel's Vespa-style e-mopeds.

The company, which last month raised $27.6 millionfrom investors, including Toyota Al Ventures, to expand its e-moped rental business beyond the current fleet of 1400 already deployed in Washington, D.C., Brooklyn and Queens, New York, is not beloved by all.

"As a lifelong bike and Vespa rider, I can tell you that there is some training and skill needed to operate a larger scooter," Gabe Klein, a former commissioner of the D.C. and Chicago departments of transportation, told Vice.com in July.

"Vandalism and theft can be a serious issue as scooters in cities are often rounded up and shipped by boat to other countries."

Risky behavior by undertrained drivers has been a concern. "I have never gone over the speed limit [20 mph]—I'm too afraid to," 23-year-old early adopter Travis Fortouna told Vice.

Regarding the company's claims to be a solution to New York's long-festering transit and environmental woes, he added, "I don't think these will solve any problems with the subway or make the city less polluted."

Revel CEO co-founder Frank Reig, who has been hedging about what city the company will land in next, is telling bloggers that e-mopeds are nothing like e-scooters, whose bad reputation grew here as the city held off regulating them.

"These mopeds are motor vehicles," Reig told TechCrunchlast month. "This means there's no regulatory gray area; each moped has to have a license plate.

"To get that license plate Revel has to register each vehicle with the Department of Motor Vehicles in each state and show third-party auto liability insurance. And then because it's a motor vehicle, it's clear that it is ridden on the street, so we're completely off sidewalks."

Reig hasn't yet revealed where the New York-based startup will launch next, but the hiring of big-money California Strategies is a strong hint the outfit will be appearing here soon, provided that the lobbying firm can ease past city regulators.

Cal-Strats as it is known among local politicos, doesn't have the cleanest of reputations, having paid a $40,000 fine in September 2013 to settle "shadow lobbying" charges brought by the California Fair Political Practices Commission.

Then two years ago, San Diego city councilman Chris Cate, a beneficiary of campaign contributions from Cal-Strats lobbyists, agreed to pay a $5000 penalty to the city's ethics commission in December 2017 for leaking a confidential city attorney memo to Cal-Strats, which was working on behalf of developers of thenow-defunct SoccerCity project.

I remember the earliest time when "Mopeds" were Too New A Street Vehicle -- a Street Vehicle, there were LITERALLY NO LAWS were established before the retailers were selling mopeds. (AA) 1st: no drivers license NOR Registration to the 'moped' was needed, then later California DMV changing its mindset, demanding requirements: (A) The minimum of a Driver's Permit was needed. Then later: (B) DMV required a Drivers License, (C) sometime near the Drivers License requirement if not the same time -- Vehicle Registration being required. I as a recipient was a victim of continuous traffic stops & receiving of 'tickets.' I remember getting that 2-stroke, 49cc drove up to 50 mph on a Motobecane once. As the speedometer face limited to "60mph." This was before the first time of [maintenance] de-carbonization, that had to be done every 300 miles. 'Mopeds' were old, established transportation in Europe; Intended to be the new wave here. But unsuccessful until later years. 'Mopeds' being different than 'motor-scooters.' 'Mopeds' have to be pedalled to start-up the motor.
Generally, the basic, longtime 'motor scooter design --- has the leg-blocking board. The design seen in the image looks so much like the motor scooter W/O the leg-blocking board. Considering the covering of the rear wheel.

These are street-legal vehicles and fully subject to the Motor Vehicle Code. If ridden on a sidewalk, the citation would be a moving violation for the driver and also carry a heavy fine. So, they don't have all the disadvantages of the scooters which seem to fall into a limbo between human powered scooters, bicycles and trikes and motor vehicles.

It will be interesting to see if the city really has reined-in the scooters. I'm very tired of dodging them on sidewalks, especially along the Embarcadero. There are times that I walk from the airport, east terminal, to the Santa Fe depot to catch a Coaster, or the reverse. It's a good walk, but all that illegal vehicular traffic on the sidewalk makes me think I'm taking my life in my hands just to walk the waterfront. These scooters are a whole different matter, and will be a wonderful source of organ donors (just kidding of course.)

Of our current street society/mindsets of : When I be in the format as a Bicyclist -- what aggravates Me, that these motorized 2-wheelers enjoy == riding their motorized 2 wheels in my bike lane. As they're SISSIES to be in the car lane, where they have the rights to, and belong. (Just as Bicycles have rights to the car lane. But are NOT the sissies). We've seen these 'scooters go as fast if not faster than their neighboring cars. Each time I see such, I wonder what they are so afraid of, as they have more Weight, than a bicycle, to contest a car -- that duel them.

LMAO what could possibly go wrong. More proof that there is no limit to human stupidity.

I say that even more: to those heavier-weighted car-drivers who choose to cut-into the Bike Lane. (in comparison to being so possessive when cyclists take their car lane.) It's all a weighted 'body-size' (vehicle & human bodies) issue. In Relation To This Article: Be the issue be a Bicyclist passing a 'Scooter, or a 'Scooter passing a Cyclist --- in the Bike Designated Lane. Typically the faster/heavier one is the pu**y.