Calico Cidery returns with organic natural ciders, and a barn

Julian ranch concocts booze from its own apple, pear, and quince orchards 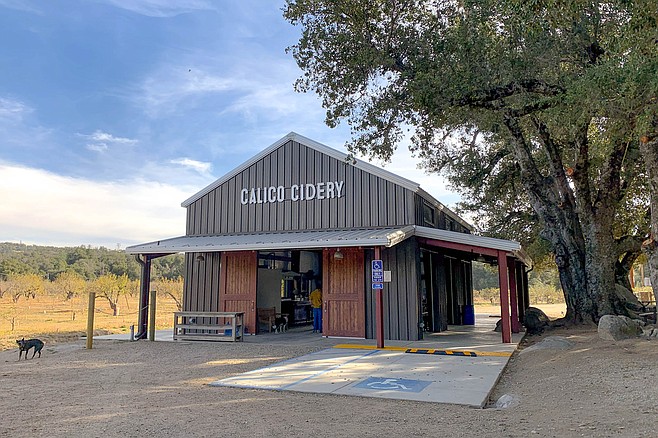 For several years, the opportunity to sit in a barn drinking hard cider made from locally grown apples has been a charming draw to the little mountain town of Julian. When Julian Ciderworks abruptly announced its closure in July, it looked like those days might be over. Fortunately, by the end of August, Calico Cidery opened up its own roadside barn taproom, just in time for the annual U-Pick season in its certified organic, on-site orchards.

Calico had been quiet on the cider front for about a year, curtailing distribution and stockpiling product as the family business readied the new taproom. Since opening in late August, it’s been pouring ciders from the 2018 harvest behind a dark-stained, vintage wood bar and large roll-up doors that let in the country air in and around the Calico Ranch. Through this year’s harvest, those who showed up for cider could eat all the apples they want. Conversely, because the tasting room license covers roughly 12 aces of fenced-in area surrounding the ranch, U-Pick customers could take hard cider out to the orchards to sip while they pick.

But for now, harvest season has come to a close, and the fruits of 2019 crop are starting to make it into the glass. And thanks to a rainy year, it’s a big crop. “This year was a bumper crop,” says Calico co-founder David Young, “We have about 30 to 40 percent more apples this year than an average year.”

That bumper crop includes pears and quinces in addition to the 120 and rising distinct apple varietals growing on the ranch. Because Calico only ferments with yeasts naturally growing on the skins of the fruit, its beverages result in a spectrum of flavors. A quince perry and a quince cider are each among the 2019 products that will begin rotating through Calico’s four taps as autumn comes to a close, the inclusion of quince fermenting to lend tropical fruit notes to each beverage. Due to the broader range of yeasts that can thrive on the less acidic pears, Calico’s perries tend to convey a little more tartness and funk than its bone dry ciders.

Even the straight ciders have a little more nuance thanks to native yeasts, whether the cider is a single origin from distinguished cider apple varietals (such as Jonagold) or a blend featuring culinary and dessert apples growing on the ranch. “We do a lot to try and put more flavor into our ciders by going native, and letting funk build complexity so our ciders aren’t so one dimensional,” Young says, “There’s always a little bit of a funk in our stuff because it’s basically whatever yeast comes in and we just shepherd it along.”

To lend more variety, Calico has also been flavoring ciders with herbs and other plants growing on the property. So far, that’s included a lavender cider, and one infused with pineapple weed, a plant relative of chamomile named for its pineapple-like aroma. “We’re doing a whole flavor garden in the back,” Young says, “so we’re growing some prickly pears, and I think we’re going to plant in some rose hips.” A pine-infused cider is up next, and for cooler days this winter, the cider maker is mulling the option to serve hot, or mulled cider.

And so, Julian remains a cider barn destination, open Friday through Sunday, from 11 am til dusk.

I don't get to Julian as often now as I did years ago. If I'd ever seen a sign for the Julian Ciderworks, it didn't register as something I'd want to visit. But this new Calico Cidery sounds interesting. Years ago, like thirty, the Calico Ranch was a U-pick operation. While their emphasis was on apple growing, they had a respectably sized pear orchard, too. The pears came on earlier than the apples, usually in late August. We actually planned a day trip to Julian each year so that we could pick a lug of pears, and would do that the weekend before Labor Day. Those pears (I favored to red bartletts) were the greatest! Within a week, they ripened, and were gloriously juicy, fragrant and tasty. After having them for a few years, no pears that you can find for sale today in town can compare.

All good things come to an end, and while Calico stayed open for apple picking, sometime in the 90's stopped the pear picking. But it was great while it lasted. You could often find pears at other farms in the area, but none seemed as good as theirs.