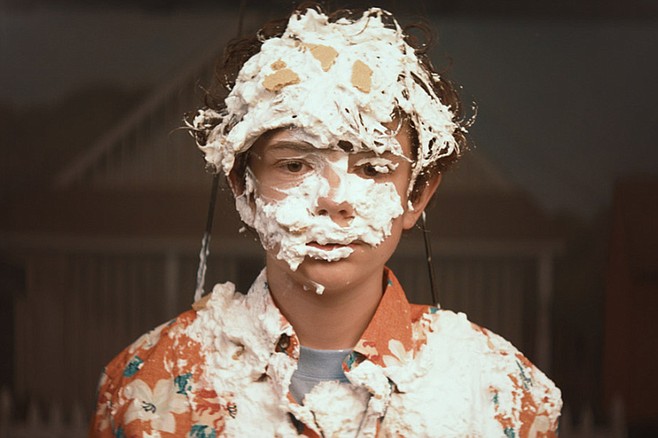 January 1, 2019. The following Nostradamic text, signed “Anonymous,” arrives at the stroke of midnight: “The year will end with Shia LaBeouf’s self-penned biopic cracking your top ten.” Did I miss an announcement piece in the trades? Perhaps Brian De Palma’s Disturbia 2? Or Martin Scorsese’s Transformersfellas? As it turns out, Israeli documentarian Alma Har’el’s first narrative feature doesn’t need the name-dropping nobility. Honey Boy establishes an impressive pedigree of its own.

With expert assurance, the opening shot yanks us into the action without even bothering to use a stunt double. A simulated blast sucks tethered movie star Otis22 (Noah Jupe, age 12; Lucas Hedges, age 22) deep within the frame. The director of the film-within-the-film calls cut while Har’el’s camera continues to roll. The crew locks and loads our hero for a second equally explosive take. When Dr. Moreno (Laura San Giacomo) diagnosis symptoms of PTSD, the cauterized headliner can barely lift his voice to mutter, “From what?” Along with the pyrotechnics, a walking trauma case of an old man who infects all who cross his path with a sense of fear and self-loathing, that’s what.

James Lort (LaBeouf) ia a self-taught and licensed psycho, an “egomaniac with an inferiority complex” who wouldn’t be around his kid at all were a paycheck not attached. A year earlier, Mom left Dad for another woman, leaving him the job of managing their son’s career. You thought Corey Feldman had it bad? When dad scolds Otis12 (Noah Jupe) for cursing, it has nothing to do with responsible parenting and everything to do with trying to impress a young woman in the room, in hopes of adding another notch on his bedpost. And it’s one thing to bribe a child with cigarettes — they can no longer play it cute, as Boganovich once did with Tatum O’Neal in Paper Moon — but Lort can also be a physically abusive lug who instantly destroys what little good faith has been instilled in the viewer.

Otis12 earned his acting chops at an early age. Receiver in hand, he mediates a heated phone call between his parents, reporting back each exchange word for word, accurately mimicking both their voices. There is a sense of urgency that magnetizes the viewer every time Jupe and LaBeouf share the screen. By the time we meet Otis22, he’s in sore need of rehab, which is precisely where he spends much of the film. Otis22’s African-American roommate Percy (Byron Bowers) jokes, “I thought only soldiers and black people had PTSD.” Though not a laugh-a-minute comedy, the film is nowhere near the dirge some would have you believe.

Dad refuses to hold his son’s hand in public so as not to be mistaken for a pedophile. He allows his homophobia to act as an excuse to keep “chicken hawks” from preying on his son. Lort’s feelings of inadequacy — or as he puts it, being a “shit father” — prohibit him from allowing another man to act as a positive role model in his boy’s life. In this case it’s Big Brothers of America’s Tom (Clifton Collins Jr.), a rep to whom Otis12 has taken a liking. The manner in which Lort deals with Tom makes Robert Duvall’s Great Santini look like father of the year. Yet no matter how awful he may be, LaBeouf never judges the man.

Lort went to war soon after his mother fell out of a window and landed in traffic. He later did four years in prison for raping a woman just long enough to cause her to leap from a moving car. There’s but one typical aspect to Lort’s otherwise unpredictable nature; resentful stage father jealous of his son’s success in every way. The young woman who lives in the cheap motel room across the way the spurns Dad’s advances, only to wind up in the arms of his son. The love scenes between Otis12 and the 20-ish Shy Girl (FKA Twigs making an unforgettable debut) are so genuine that they never call to mind any negative talk of what is essentially a case of reverse-pedophilia.

At its heart, Honey Boy is a film about a boy who both wants and deserves a better father and the inescapable reality that he will never get one. When it comes to cinema as therapy, LeBeouf put his time (and ours) to superb use here. Almost all is forgiven. One more like this and we’ll consider Disturbia permanently expunged from the record.