“This album covers a lot of emotionally heavy stuff like mental health, addiction, existence, and relationships” 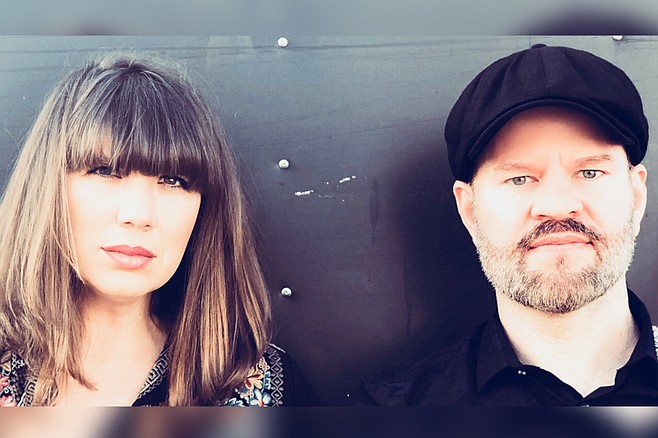 “Our music draws from singer-songwriter, indie-folk, country, spoken word, and electronic influences,” says singer-songwriter Amy Day, one half of the Spiritual Motels. “Our sound has been compared to the Head and the Heart, the Avett Brothers, and Bon Iver.” Day’s own ethereal vocals bring to mind Lana Del Rey and Hope Sandoval.

“I use a JamMan looper pedal,” says Musisko. “We do live looping by creating and layering parts on the spot, and we also use samples we created in the studio and loaded into the pedal, like synths, handclaps, and on one song a series of voice mails. We’re not trying to recreate the studio versions of the songs and like to improvise. We have different arrangements on different songs and mix them up and rewrite them all the time.”

Their new full-length Super Tiny Disappearing Oceans was recorded, mixed, and mastered by Mike Kamoo at Earthling Studios in El Cajon. “This album covers a lot of emotionally heavy stuff like mental health, addiction, existence, and relationships,” says Musisko. “The title is a play on trying to make sense and capture these things through art in the current state of the world.”

The Spiritual Motels and Becca Jay

The record release party happens Saturday, November 23, at the Merrow in Hillcrest, with a bill that includes Lindsay White, who recently performed her new single “Let Love Lead the Way” at this year’s Women’s March San Diego. Also appearing is Becca Jay, who contributed vocals to albums by Gregory Page (So It Goes) and Veronica May (Awakened) before her own debut full-length was released just over a year ago.

“Normally, we perform just as a duo,” says Day. “For the release show, however, we’re going to have lots of guests performing as part of our set. We’ll have Becca Jay and Jules Stewart singing backing vocals on several songs. Jules will also be drumming on several songs. Rob Deez is going to be rapping a verse of one of our songs, and Lee Saper will be playing trombone on another. But even with all these incredibly talented local musicians on stage with us, the show will still be mainly a duo-focused show.

“We’re really proud of being a duo, because we love being a pair of musicians who get on stage to do a lot, with just two people.”