No travel permit? You're outta here. 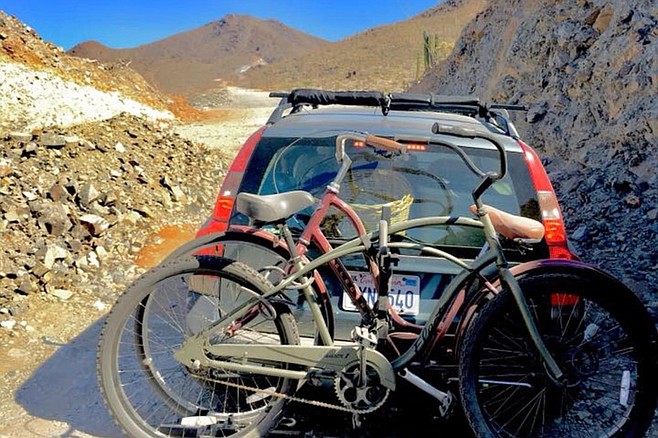 After news broke recently that Americans could be deported back to the U.S. if they didn’t have the proper documentation to be in Mexico — some expats residing in Baja and incoming snowbirds, reportedly went straight to the Instituto Nacional de Migración immigration offices to get their paperwork in order. 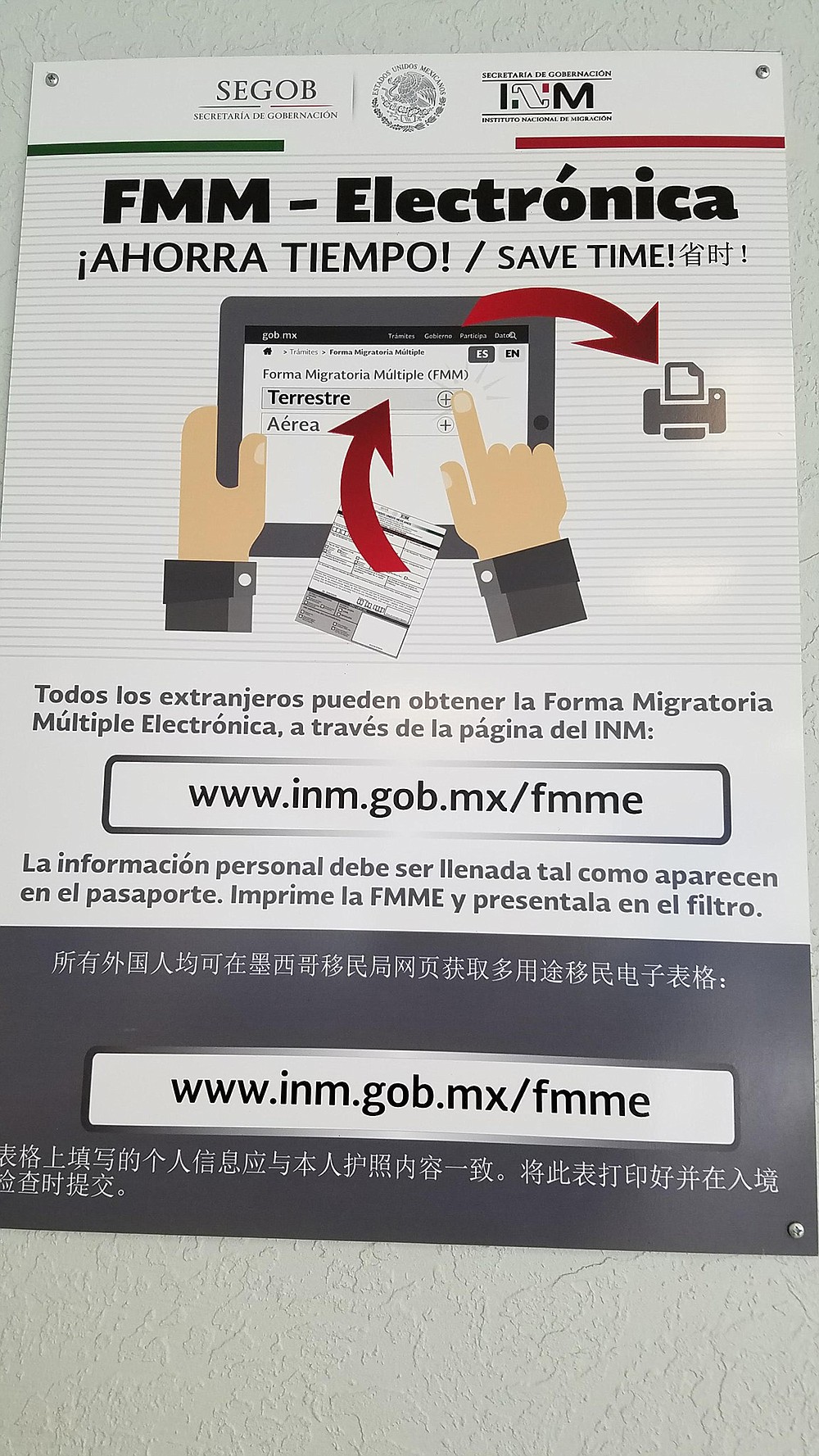 Permits can be acquired electronically, but still must be stamped in person upon when travelers cross the border.

Since 2015, the Forma Migratoria Múltiple permit has been required for foreigners to travel within Mexico, but according to many Americans living and visiting Baja, no reports of deportations have been made. In fact, the general attitude to obtain the travel permit was blasé — until the El Imparcial news outlet posted a September 24 news report.

“According to the records of the national immigration office, about 8000 Americans are in Rosarito,” reported the Mexican news outlet, “but a thousand of them do not comply with their immigration status to reside here legally.”

“Manuel Alfonso Marín Salazar, head of the national immigration office in Baja, said that most [Americans] entered the region through a 180-day permit, and those who exceeded that time limit will be deported to their country.”

Though there have been no deportations reported, stories of permit-related hassles are starting to surface in the Baja-visiting community. Last year, Imperial Beach resident Tom Summers drove 950-plus miles down to La Paz with a permit. “Even though I had a receipt showing that I had paid the approximately $28 USD,” he said on October 2, “I was refused boarding the ferry from La Paz to Mazatlan. I had to drive all the way back to Imperial Beach.” 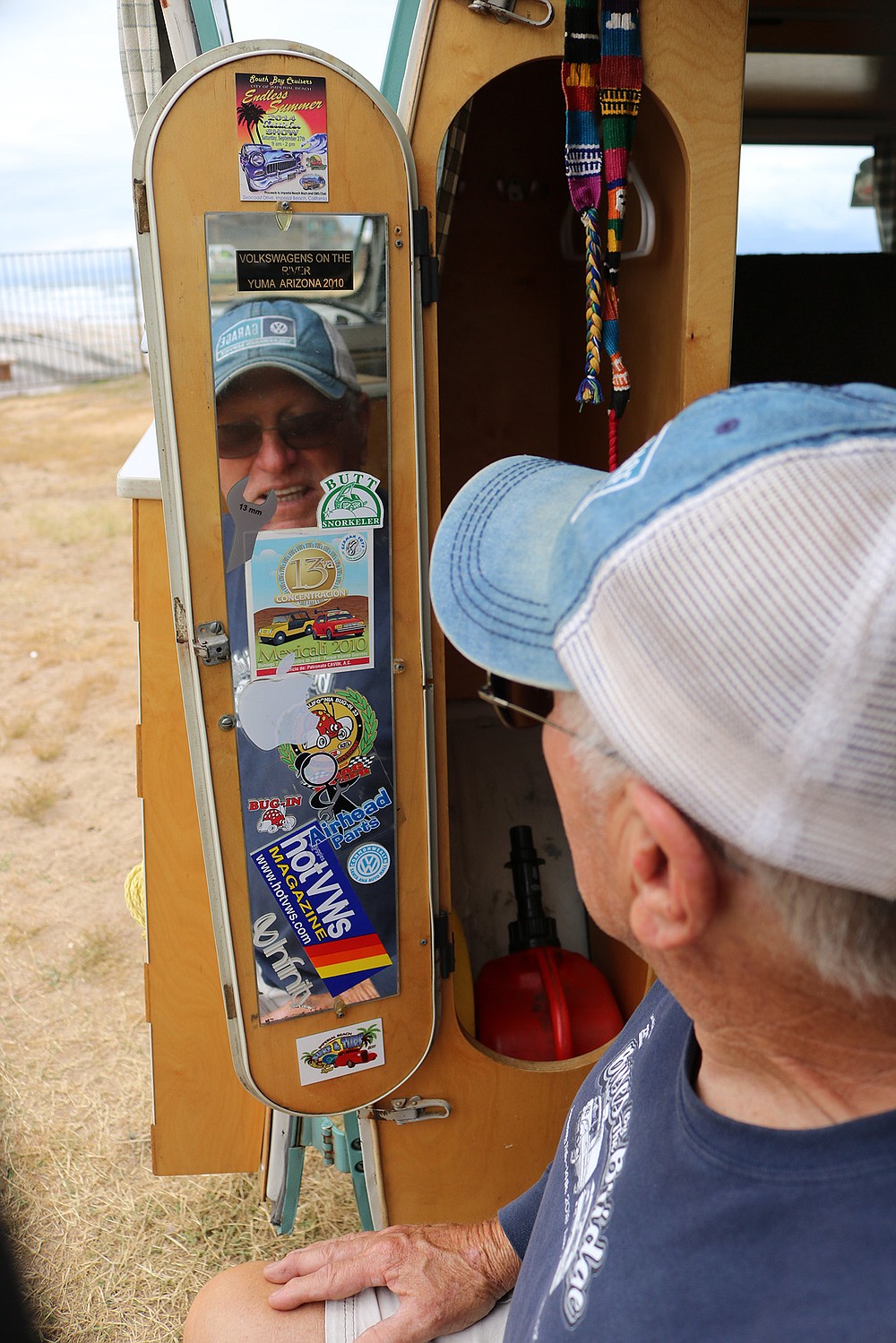 Though he had bought a permit, Tom Summers was refused entry to the La Paz-Mazatlan ferry because he’d neglected to have the permit stamped at the border.

What the 72-year-old Navy veteran forgot to do was get his travel pass stamped at the migration office at the border. “They were quite unmoving in the rules,” Summers said, “however, I attributed it to a new regime and a redoubled effort to fight corruption. Penalizing money-spending visitors is not in Mexico’s best interests.”

Last year, American Cheryl Swift moved down to Loreto — about 220 miles north from where Summers was denied access to the ferry. “We were waved through at the Mexicali border, and I was so excited that I didn’t think about stopping at immigration to fill out a form,” she said to me on October 2. “You would think I would have known better, since I was flying back and forth via Tijuana using the CBX” — the Cross Border Xpress terminal from Otay Mesa to Tijuana International Airport — “frequently before the move. The thing is, my friends have Mexican citizenship, and it did not cross their minds. Then about a month later, I was making arrangements to fly to La Paz, and it dawned on me: I did not have the immigration form.” 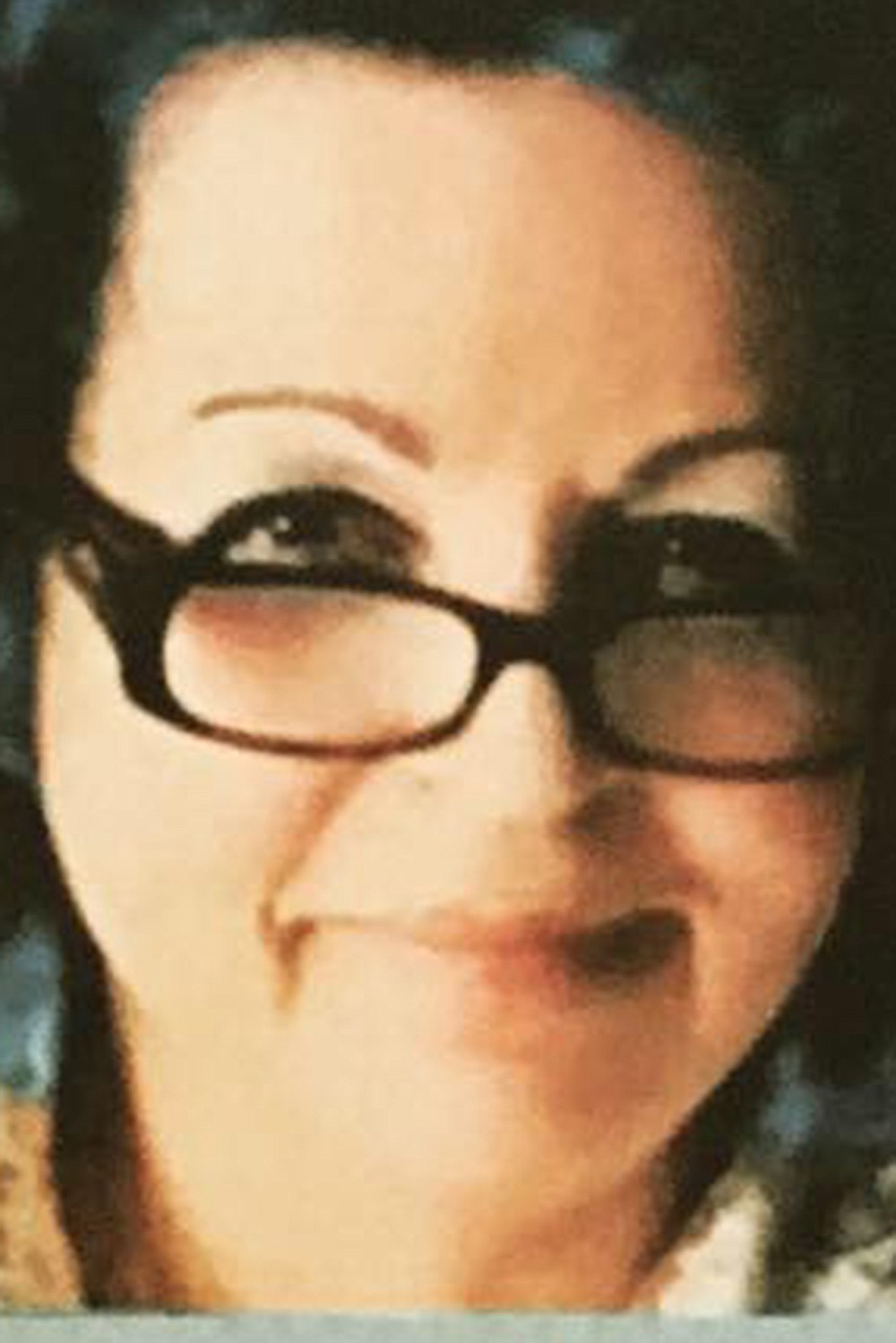 Berta Graaff: “Stop at the office on the right just as you cross the border.”

Many Americans think that having a passport or visa is all that is required to travel in Mexico, but that is not the case. A Forma Migratoria Múltiple travel permit, which is different from a passport or visa, is required by all foreigners that enter Mexico whether via foot, an automobile or motorcycle, boat, or air. To obtain a permit at the immigration offices at the U.S./Mexico border on the Mexican sides — one must have a valid passport card or booklet. Another thing that adds confusion to the travelers is how the permit is sometimes referred to as a “tourist visa” despite it not officially being a visa.

Like Swift, KJ entered through Mexicali recently and was pulled over. The official asked for his and the passengers’ travel permits. “We had them, of course, and were sent on our way,” he said. “I no longer get the free seven-day [travel permit] — odds are I’ll be back and they seem to mess with you on those. I just pay, and get the 180-day permit.”

The cost of an up to 180-day permit is 558 Pesos (about $28 USD) per person. If the traveler is planning on staying in Mexico for less than seven days, a seven-day permit is no charge. But if the traveler overstays the seven-day allotment — he or she will be deemed illegal in the country. Many Americans such as Swift, Summers, and KJ — advise their fellow travelers to pay for the 180-day pass in case they get stuck or stranded down there.

“So, I talked to a local friend of my situation not having the travel permit,” Swift continued, “and she suggested I just go to the local immigration office and explain my mistake. I thought that I would probably have to pay a fine, and I had no problem with that, since it was my error. I went the next day and explained my mistake and I was then informed I needed to go back to the border and get a Forma Migratoria Múltiple. They said it was my responsibility, and I should have paid attention to the signs at the border. I went right over to Califia Airlines and booked the next flight back to the border.”

Berta Graaff obtained her permit online. “Before leaving our home in San Diego,” she explained, “we went online, filled it out, and printed it out. The important thing is to stop at the office on the right just as you cross the border.”

Graaff is referring to the San Ysidro/Tijuana point of entry — before entering into the custom inspections area where the drivers are red-or-green lighted in.

“The office is right there [on the far right side],” she continued. “Park and go into the office and there is a special window just for the forms. They will stamp it, and off you go.”

JF is an American that relocated to San Quintin, a small beach town about 115 miles south of Ensenada. She said she was checked twice for her permit. “Once on the road between Santa Rosalia and San Bruno,” she said, “and also when we were in a car accident we had to send a copy of our form to the insurance company before our payout.”

“If you get into an accident in Mexico and you don’t have a tourist permit,” says the Discover Baja website, “you are not considered to be in accordance with Mexican law, and therefore your Mexican auto insurance can be rendered invalid. Each individual must have their own form, including children ages two and up.”

Regarding situations such as Summers not getting his permit stamped, and Swift not purchasing her FMM in southern Baja — Discover Baja says: “You must get your forma stamped at the border when entering Mexico. You are no longer allowed to get a form for land travel at immigration stations farther south. The immigration office in Ensenada now only processes nautical permits for visitors entering Mexico by boat. The San Ysidro El Chaparral border crossing in Tijuana is open 24/7, 365 days a year, so there should be no problem with getting your FMM at the border no matter what time you’re crossing into Baja.”

Discover Baja offers the permit through their website for $38 USD, but travelers still have to have the permits stamped at the INM office when they cross the border by foot or vehicle.

If the traveler is entering Mexico by boat or plane, “the airline will provide you with the paperwork for the tourist permit and has included the fee for the travel permit in the price of your ticket,” says Discover Baja. “If you are crossing into Mexico by sea, and going south of Ensenada, you can get a form through Discover Baja and have it validated at the first port of entry (Ensenada). If you will be crossing into Mexico by sea, but not going south of Ensenada, and not stopping on land, you will need to obtain a nautical tourist permit which is an entirely different process. Discover Baja is now processing nautical permits for our members. Please note that it takes 48 hours to obtain a nautical permit.”

In the last year or so, a survey regarding reasons for not having a travel permit was posted on the Talk Baja Facebook app. Of the 2576 that answered the survey, 287 said “too much hassle,” 210 said “financial requirement too high,” 140 said “concerns over car registration, taxes, etc.”; 154 said, “this is Baja Mexico — Why worry?” and the remainder said “n/a.”

“The increase in security is because the Mexican Government is attempting to stop immigration through their southern border,” Graaff commented. “So, there is no reason to be worried about this increase in security. During your stay in Baja, it’s rare that you would be stopped. But, if you are stopped, now you are covered. You don’t need to turn in the form to anyone when you leave Baja. We were told that it’s just a formality, while you are in Mexico.”

“Therefore, Marín Salazar stressed, “Americans, like other nationalities, are subject to an inspection to check their immigration status,” says the El Imparcial news report, “and [if they are not legal, they] will be deported through the San Ysidro gate.”

Good. It seems that Americans are so arrogant that they think they can do anything. Mexico should deport all Americans that are not in the country legally. We do it so they should to.

Maybe so, but they want and need the bucks that the gringos spend. All this seems intended to provide more reasons for their cops to harass the visitors and expats, with plenty of opportunity for shakedowns. So, not only is it dangerous to head south of the border, now it requires jumping through bureaucratic hoops to do it legally. All the more reason to avoid going there at all.

No. 1, it is not "jumping through hoops" the FMM that is needed is included with airfare, and if you drive in it takes only a very short time to stop and get it. There are only certain areas that are dangerous, just like there are certain areas in the U.S. one should never go to. Have never been harassed by cops in Mexico, although I have numerous times north of the border. Please stop spreading misinformation.

This is from someone who has actually driven through Baja multiple times and is here at least several months of the year. I'd far rather be in this area than most of the U.S.

Vis-duh, you mean, like we need their labor force???

How does it seem Americans are "Arrogant?" Your self-loathing is showing. In this article, most of the incidences are lack of knowledge and poor communication.

Another Perspective: If it wasn't for the never-ending-sewage trouble at our border, (that Mexico will never de-contaminate of) would the U.S.A. surfers be courageously be battling against whatever invades their 'turf' (from the south, etc)?

By November 23rd there's a news report: "sewage report" about "trash coming up from the south"; vs the time of SDR comments made between Nov 21 -Nov 23rd.