A Coronado dog park, on paper 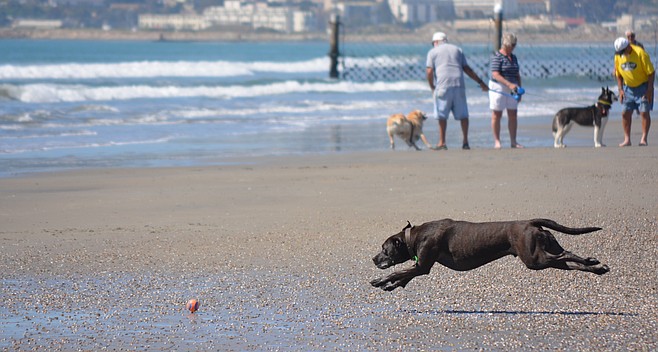 Where is a good location for a dog park in Coronado?

After years of discussion between city officials and the public, of workshops, a survey, 1,285 written comments and 230 markers placed on a map of options, the answer seems to be "nowhere."

"I think we've beat this to death," said councilmember Donovan at a meeting November 5, when the council voted to take no further action for now. "No matter how you cut it, there's just not one that's going to work."

Akshay Sateesh, chair of the parks and recreation commission, who has spent long hours on the project, was frustrated and confused by council's willingness to walk off the job.

"Change does not come by doing half the work," he said, "and this project specifically has yet to complete the process."

The next step is a feasibility study, Sateesh said. His department requested it. But somehow that step, like some of the early sites later deemed unsatisfactory, has fallen off the map.

Coronado's existing dog parks don't work for everyone. Dog Beach is unfenced and inaccessible to some, requiring a sandy trudge even for seniors and the disabled, both human and canine. The dog park in the Cays is too far to drive for others.

In chasing down the best sites, the public weighed in on selection criteria, said Roger Miller, staff liaison for the parks and recreation commission. Most agreed upon was land suitability/topography. Next was an onsite water source, followed by parking not disrupting neighbors' spaces.

Only three site criteria failed to reach 60 percent agreement or above, which Miller said was the "breakpoint of agreement." These were arterial street proximity, minimum 200 feet; neighborhood compatibility, at least 500 feet from homes, which drew the most written comments; and garnering the lowest consensus, a buffer from children of at least 200 feet.

There were design amenities criteria. Most agreed upon were trash cans and sanitation stations, followed by signage rules. Nearly half who weighed in wanted large and small dog areas, while the least consensus was for agility equipment.

From all the public suggestions, Sateesh said they applied "as many and highest agreed to criteria to as many sites as possible," which narrowed it down to six: Ferry Landing Park; the Early Childhood Development Center; Glorietta Bay Promenade park; the golfcourse; Harborview/SDG&E park; and the North Beach entrance.

That's where things have stalled out.

Why? Sateesh pointed to the staff report the council received, which he said was misleading. It states that "applying the results of the sites selection criteria" concludes that none of the sites "satisfactorily meet the criteria endorsed" by most respondents. "Therefore staff is recommending no further action be taken at this time."

Sateesh says they weren't asked to identify a single site based on the preferred criteria, but to hear public comments on the criteria "in order to make recommendations to amend them."

He asked that city council approve parks and recreation staff to move forward with a feasibility study to understand exactly how the six sites would address as many of the criteria as possible.

Councilmember Donovan said he didn't follow the feasibility study approach. "We came up with a site selection criteria. None of the sites meet all the criteria, so I guess the approach now would be, let's figure out what criteria aren't as important, and we try to figure out where that goes. But the main ones are parking, closeness to residences; these in my view aren't going to work."

Mayor Bailey asked for more detail about the proposed study. "My understanding of your request is that we direct parks and recreation to apply the criteria to those several parks. It appears that has already been done. Am I missing something here?

"Not just to apply the criteria. We've applied the criteria," Sateesh said. "Now we're moving to the next step." The data collected so far still doesn't tell them if a dog park is feasible at any of the sites, he said. "We actually have to do an understanding of the topography," to know just how far away the sites are from residences, for example. They've had to guess.